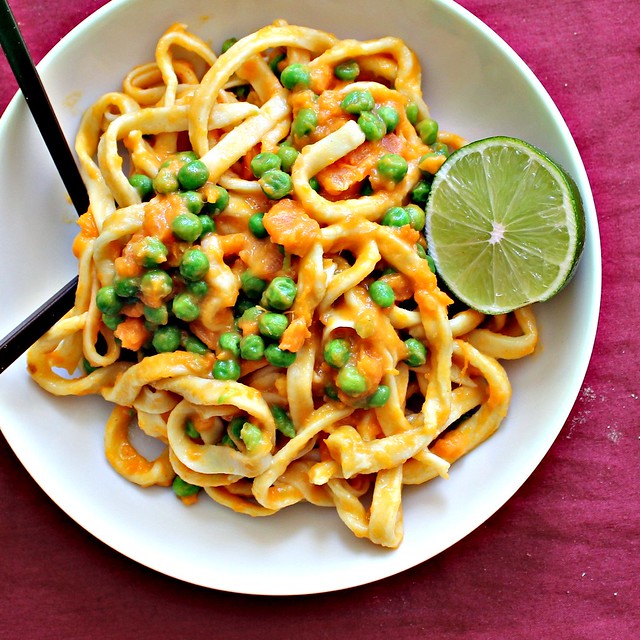 You are going to discover that in about three photos.  And I just didn’t want to not mention it and then have it be the brontosaurus in the room.  It’s too early in the morning to have to deal with brontosauruses in a two-by-nothing apartment.  There’s no space or time or energy for it.

Usually I at least get the color right so that when a little bit of sock peeks up over my sneaker, I don’t scare the masses away or become the talk of the town.  But it was a Sunday on the day I took these pictures and I was supposed to be in my room, writing an ethics paper, banned from all human contact except for that of my roommates who are used to my deviant sock mismatching ways.

So it goes. I don’t wear matching socks.  Now you know. 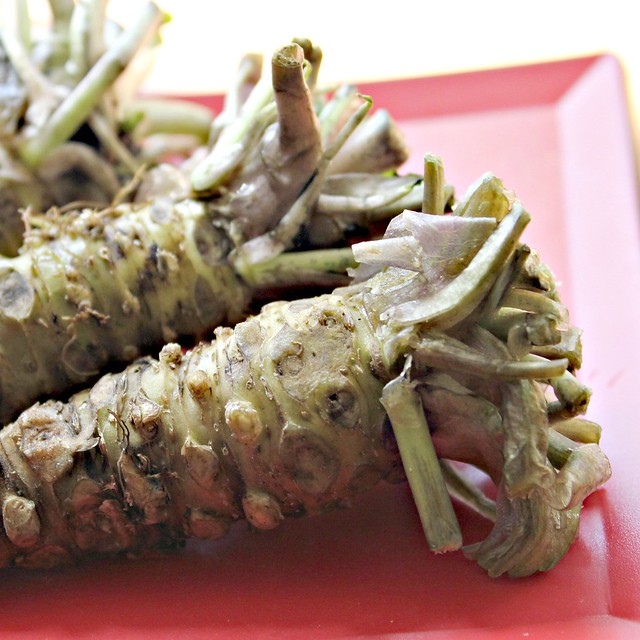 Were you guys aware that wasabi is not actually a neon green substance that comes out of a tube?  That actually it’s that crazy funky looking thing up there that would give kohlrabi a serious run for its money in an alien life form beauty pageant? 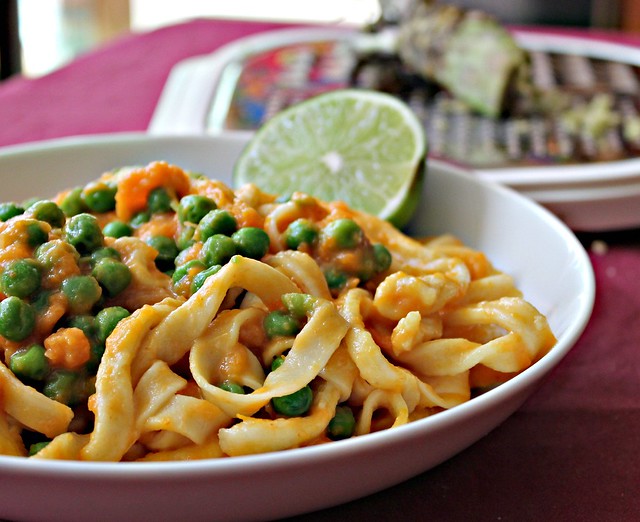 So how did I get my grubby little hands on such an ugly/delicious piece of produce, might you ask?  Well, for the final round of the MarxFoods Ridiculously Delicious competition, we were over-nighted a top secret (perishable!) mystery ingredient that we would then have to turn into a culinary masterpiece.  There was a lot of speculation about what this top secret (perishable!) mystery ingredient would be.  Brian, Azmina, Shannon and I spent all of last week littering the Twitter airwaves with our guesses.

And then.  It arrived.

“It” being this pretty/ugly little rhizome that I had no idea what to do with.

(And oh look!  There are the mismatching socks.  Joy.) 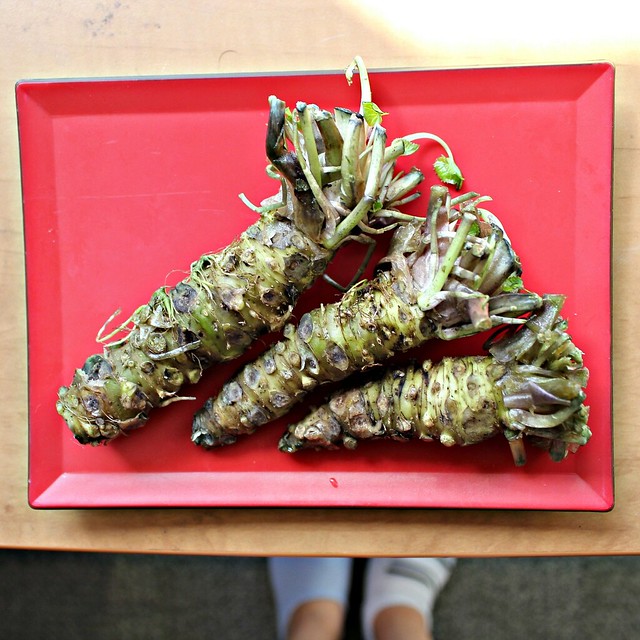 I thought long and hard about going the sweet route with it but I was pretty sure that nothing could rival those wasabi crystallized ginger dark chocolate brownies.  Nothing.

So then I totally switched gears. All of a sudden, thoughts of wasabi lasagna, wasabi pizza, and all sorts of wasabi fusion dishes were coursing through my veins and into my thoughts.  But then, as it so often does.  It all came down to sushi.

Now.  If you know me, you know that when I go out for sushi, I always order a sweet potato tempura roll.  Always.  Without fail.  It’s essentially the only deep fried thing that I eat and I refuse to feel even a speckle of guilt about it.  So this pasta dish is a play on that.  The pasta is homemade and is infused with some fresh and dried ginger that give it a nice hint of spice.  An ode to pickled ginger, if you will.  A condiment that I adore so much that I’d pretty much be happy to just sit around eating a jar of the stuff.  Then, the sweet potato sauce which is Thai in essence.  A little bit sweet until you get hit with the spice and wasabi flavor that really isn’t a kick in the face but is an undertone that makes you moan after you take a bite. 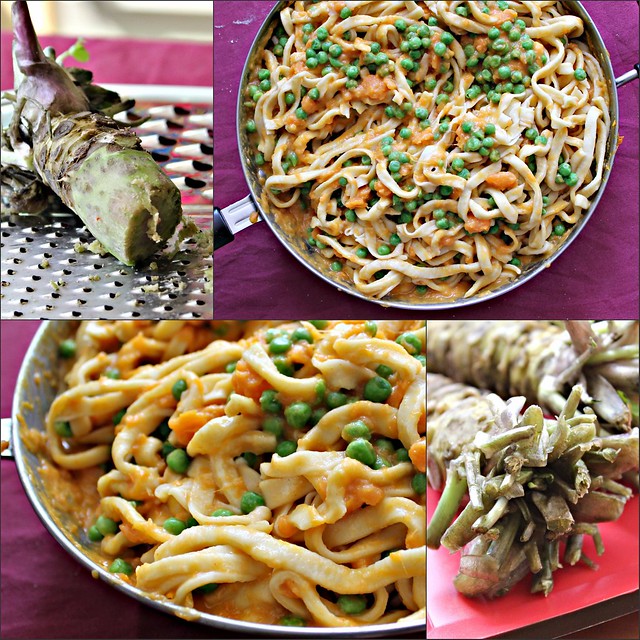 1. Combine the flours and salt in a bowl or work surface, creating a well in the center. Crack the eggs into the well.  Using a mixer or by hand, slowly mix, incorporating the egg into the flour mixture a little at a time.  Once you have a dry shaggy dough, mix in the gingers, olive oil and water.  Knead until dough is fairly smooth and homogeneous.

2. Divide the dough into four portions and cover with a damp towel.  Allow to rest for 20 minutes.  Using a pasta maker (or rolling by hand!) thin and cut the pasta as desired.

3. To cook, boil in salted water until al dente.  Drain well and serve.

2. Mash sweet potatoes.  Place in a large skillet over medium-high heat. Mix in the coconut milk, red curry paste, wasabi, coconut sugar, and juice from half a lime.  Turn heat to low and simmer for 5-10 minutes so flavors can meld.  Add in the peas and cook until heated through.  Season with salt and pepper to taste.

3. Toss with pasta and serve.

I am submitting this to Presto Pasta Nights, which is hosted this week by Claire of Chez Cayenne! 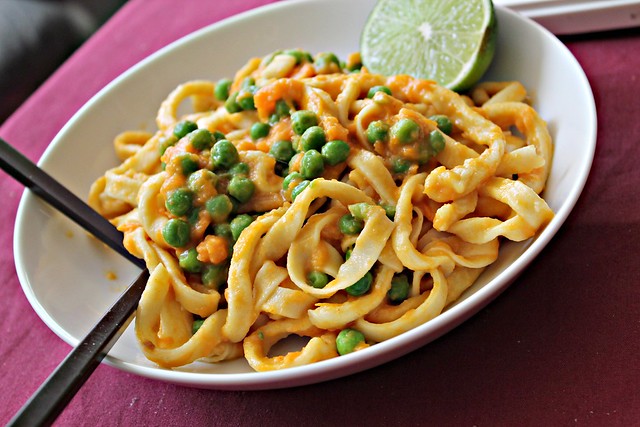