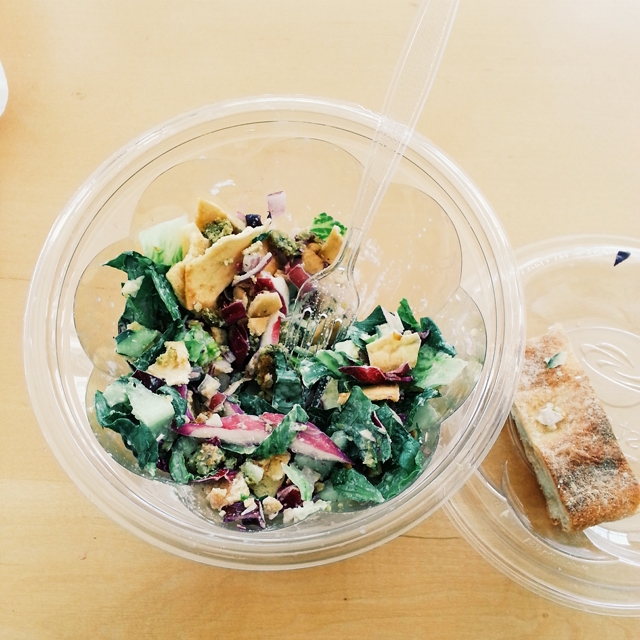 1. Anybody else on a MAJOR salad kick after this weekend’s festivities? My coworkers and I rediscovered a salads-only lunch spot a few blocks from where we work, and it is AWESOME. I am so pumped to recreate some of their salad combos for the blog! My favorite so far is the falafel salad – falafel, romaine, cucumbers, tomatoes, pita chips and Moroccan tahini dressing. Can you say YUM.

2. Of course, I would remake it with kale. Obvi.

3. So yesterday I did the strangest thing ever, for me. I TOOK A NAP. It was glorious. Now, why exactly don’t I do this on a regular basis?

4. MAD MEN. What did we all think of the first episode? Totally weirdo as usual? But already so much better than the whole last season?

6. You may have noticed this yesterday, but I finally succumbed to Food Blogger Law #6555, which states that every food blogger MUST OWN A MARBLE SLAB. I’ve actually had mine since November, but it was too heavy for me to remove from the box myself and I didn’t want the.boy to know that I had bought it, lest he yell at me for buying yet ANOTHER heavy thing that is going to be a major pain to move at some later point in time.

7. Well, I worked up the nerve to ask him to pull it out for me (<– that’s what she said) in a desperate moment, when I really needed it to solve all my pie crust rolling problems. It did. I am never not using it again.

8. There is so much marble slab in your future. Consider yourself warned.

10. (You totally need one too, don’t you. #sorrynotsorry)