Here’s the plan. First, I am going to lure you in with this picture: 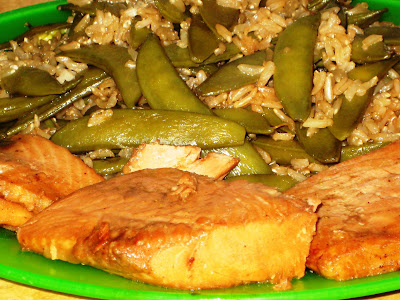 Are you salivating yet?

Next, I am going to tell you that before we get to any actual food, I am going to digress with some book reviews that I have been meaning to put up. The first being of Bass Cathedral by Nathaniel Mackey.

First, the amazon.com synopsis: In the fourth installment of this National Book Award–winning poet and novelist’s ongoing epistolary work of fiction, Mackey (Splay Anthem) is never shy of the unwieldy or the recondite, plunging readers into the heady thoughts of N., narrating letter writer and member of the fictional early ’80s jazz ensemble Molino m’Atet, who are releasing their first album, Orphic Bend. Like the plot points of Mackey’s previous novels (which feature first concerts, new drummers and intra-band love triangles), the album release here serves mainly to trigger Mackey’s singularly styled vamps on jazz and its mystical connotations. Mackey works in a kind of otherworldly reality, where recognizable situations quickly give way to the fanciful: the band, at one point, finds that cartoon speech balloons appear from the grooves of their album (as they appeared from the band’s instruments in earlier installments), causing confusion among the band members and their fans. I dreamt you were gone… begin the balloons; from here, Mackey takes off into the wilds of abstraction and imagination. Less stridently avant-garde and more readable than its predecessors, this poetic novel is nonetheless dense and challenging. It may not be for everyone, but fans of Mackey’s poetry, and of jazz, may find themselves right at home.

My thoughts: Don’t read this book. Pick it up in Barnes and Noble. Open it to a random page. Read a paragraph. Marvel at the poetry of the language, the way the book seems to use form and word choice to impart the musicality that is being described. Smile. Close the book, put it back on the shelf and walk away, happy in the knowledge that you have lost nothing from not reading the entire thing since you wouldn’t have understood anything that was going on anyway. Mackey tries too hard to be esoteric and avant garde with the end result being that you’ll find yourself in the middle of every sentence going what the hell is going on and do I even care? The characters are somewhat pretentious and self-involved and just irritating. The language is pretty. For the life of me, I can’t understand why the NY Times liked it so much.

Black Flies by Shannon Burke
Amazon.com: Gunshot wounds, crack pipes and rotting corpses abound in this raw and fascinating novel about Harlem paramedics in the mid-1990s, the second novel from former EMT Burke. Oliver Cross graduated from Northwestern as a middle-class do-gooder. But he and his partner, Rutkovsky, a jaded Vietnam veteran and one of the city’s best medics, see enough massive trauma to put Cross on the fast track to deep disillusionment. Of the bizarre, tragic and often shocking emergencies encountered during Cross’s rookie tenure, the crisis comes when he and Rutkovsky respond to a call from an abandoned building where a crack-addicted, HIV-positive mother has just given birth to a premature baby, and their handling of the mother and child—believed to be stillborn—will alter the course of both men’s lives. Burke is a poet of trauma, and his expert, macabre portrayal takes its toll on the reader just as the job takes its toll on Cross.

My thoughts: This book is written through a series of vignettes or encounters that Cross has during his first (and only) year as a medic. It tells of various patients he saw, including all of the gory details (i.e. not for the faint-of-heart), and also does a good job of painting a picture of just how extensively this group of Harlem medics is affected by the horrors that they see on a day-to-day basis. It’s also somewhat depressing, though, seeing the mental decline of these men and kind of leaves one with the impression that there are no success stories in this realm. Very few patients make it and those who do are drug-addicted, hopeless, and only live to be placed back on the road to decline. In this sense, I found this book thought-provoking but don’t know that I would highly recommend it the way I would others. If you have nothing better to do, then sure go ahead and read it, but if not I don’t think you’ll really be missing much.

Now, the moment you’ve all been waiting for: the food. 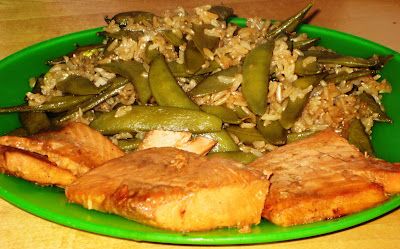 So we know that I’ve been VERY slowly but somewhat surely trying to cook through the Bon Appetit book. I have been craving fish recently, especially as the weather has been getting warmer. It just seems lighter and more summery. Can’t explain why. This recipe for maple-soy-glazed salmon jumped out at me partially for its simplicity, partially because it features my favorite fish, and partially because it has the sweet-salty combo that I so love. The whole recipe came together within minutes and was really quite tasty. I changed it a bit in that where it called for 1 tsp of adobo sauce from a can of chiles (I wasn’t about to buy a can just for 1 tsp of sauce), I added some cumin to impart a smoky flavor. Retrospectively, it probably could have used some chili powder or cayenne and maybe some acid to cut the sweet/fat combo. Perhaps a touch of vinegar. It really was good as-is, though. To go with it, I decided to include some sugar snap peas with an Asian flavor profile to complement the soy sauce in the fish glaze. I found a recipe on Veggie Venture that looked like it would fit the bill, but decided to just cook the rice and sugar snap peas together in order to minimize the number of dirty dishes. The end result being that the rice took on a kind of fried rice flavor, which was all in all quite good.

1. Whisk together maple syrup, soy sauce, and cumin. Marinate the salmon in this mixture for at least 30 minutes.

2. Heat a heavy nonstick skillet. Reserving the marinade, cook the salmon for about 3 min/side or until slightly charred on the outside and just opaque in the center.

3. In a small saucepan, boil the marinade until reduced (about 4 minutes). Pour the sauce over the salmon and serve.

1. Combine all the ingredients in a pan with 1 1/2 cups water. Bring to a boil and then simmer, covered, until rice is done. 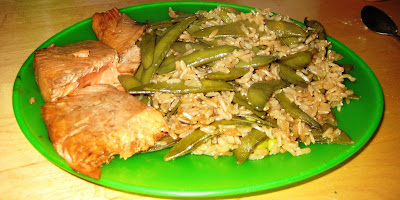