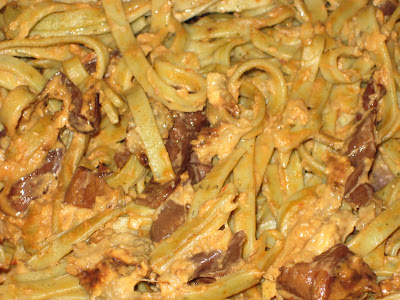 Last night my cousin Meghan called me to tell me she would be coming into Boston today to watch her boyfriend run the marathon and asked me if I could spare a few hours to spend some time with her. Even though we didn’t spend much time together growing up (Meghan was born and raised in North Carolina), we became a lot closer this past year since she moved to NYC to go to Cornell for PA school (physician’s assistant). So, of course I said yes! I met up with her around 10:30 and we proceeded to spend the day running from course mark to course mark trying to catch her boyfriend as he passed. We ended up being able to see him at mile 16 and mile 25. He finished with an earth-shattering time of 3:08!

It was awesome being at the marathon and getting to feel all of that athletic running energy. It made me think that there may be a marathon in my future… Another cool thing about spending time with Meghan was that she is a runner as well and competed in the Philly Marathon this fall. She is also currently training for a 50K Trail Run…that’s right – 31 miles on DIRT. She’s even crazier than I am. We had so much to talk about it was insane – between boys, love, life, running, family, etc. it seemed like the day just flew by. We just have so much in common that I’m glad we finally became close after all these years. And that was the cheesy realization of my day.

So I am now on my third-to-last of my specially flavored Pappardelle’s Pasta. This flavor was kind of a toughie – lime cilantro. I sat around thinking for a while of some other flavors that are traditionally served with limes and cilantro and thought that thai seemed like a pretty good option. Then, I remembered back back way back to when I used to eat dining hall food. I got stir fry all of the time (it is made to order and is probably the safest option) and my especial favorite sauce was the peanut sauce. Suddenly, all of the stars aligned and everything fell into place; I quickly looked through some of my favorite blogs to find a recipe to start with. In addition, I spotted some Chinese eggplant at the MIT produce stand and, since it is something I never see at the regular supermarket, decided to pick some up to mix in with this pasta. In the end, the flavors of this sauce replicated the dining hall version really well and went great with the sweet tangy-ness of the pasta. I have to say, I like my sauce better than dining hall’s because I added some extra spiciness to it. In my opinion, the spicier the better! 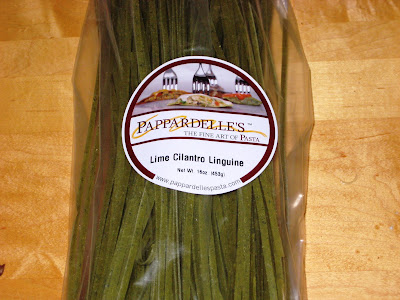 1. Preheat oven to 450. Slice the eggplant so that you have a series of coin-like pieces. Arrange on a baking sheet, spray with cooking spray, and sprinkle with salt. Bake for 20-30 minutes or until cooked.

3. Place all of the other ingredients in a food processor and blend until smooth. Heat in a saucepan until bubbly. Reduce heat and simmer for about 5 minutes, stirring regularly. 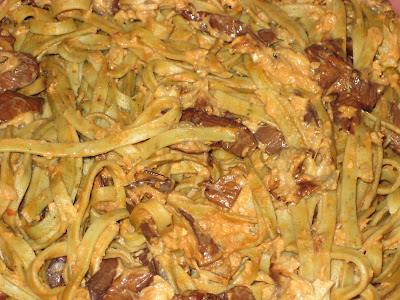 I am submitting this to Presto Pasta Nights, which is being hosted this week by Hillary of Chew on That.