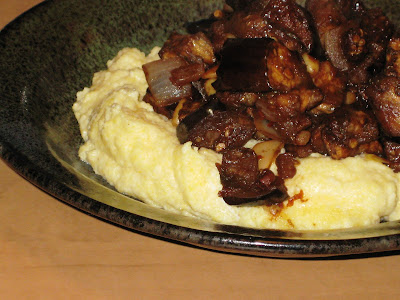 I’m beginning to think that I should rename my blog “Joanne Eats…Whatever is On Sale At Whole Foods”. Since that is all I cook. I should also note that whatever is on sale is also almost always locally grown. That helps in my decision-making and menu-planning process. I like supporting local farmers. It makes me feel like I’m fighting the good fight against big business in a very Captain Planet kind of way. So from now on, I’m going to stop writing things like, “I made this and used this because this ingredient was on sale at Whole Foods.” You can just assume that to be the case. Unless you see me cooking with fresh figs in the middle of January. In which case you can just assume that I’ve lost my mind or come into a lot of money and can have them specially imported from some tropical location in the Caribbean. Are figs even grown in the Caribbean? I have no idea.

I always feel bad cooking with eggplant because my roommate, Sophie, can’t eat it. She is allergic and it makes her tongue numb. So she’ll walk into the room and say, “Something smells really good.” Probably with the notion that I’ll say, “Hey do you want to taste some?” And I do say that. But then she notices that it has eggplant in it and has to walk away. Sadly. And I have been cooking with it so much lately that she is probably beginning to think that I am categorically including it in recipes so that I don’t have to share. And that’s really not the case. I SWEAR. It’s just that it’s so cheap right now and I love it so much that I just can’t miss the narrow window of opportunity that is eggplant season at the end of August.

Okay so I saw this recipe for eggplant caponata on Closet Cooking many many months ago. It is based on a Mario Batali recipe that can be found on the Food Network website. I have never had a caponata before this although my parents and I were talking about it once and they said that rumor has it that Italians used to keep caponata for months and months before there were fridges by adding salt to it every few days. So you would make it in August when the eggplants were ripe and then eat it in January when it was cold to remind yourself that there is a light (the sun, for example) at the end of the tunnel. After tasting it though, I don’t think I would be able to let it sit around for that long. The intense flavor, especially with the addition of the cinnamon and cocoa powder and balsamic vinegar, was actually addictive. In fact, if you are going to make this you must MUST MUST use good balsamic vinegar. That $2 store brand stuff is just not going to cut it. Sorry.

Although caponata is traditionally served as an appetizer on crostini, you can also turn it into a panini or serve it with pasta. I happened to eat it with a creamy polenta, the simple flavor of which balanced very nicely with the heavily spiced caponata. If you have any eggplants left over from your harvest, this is something I would definitely try making. And for those eggplant-haters out there, I bet it would be great with summer squash as well, which I’m sure is threatening to take over your lives with it’s sheer abundance. 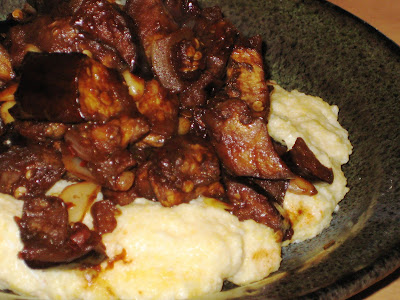 For the eggplant:
1. Broil the eggplant in the oven until golden brown, about 7 minutes per side.

2. Heat the oil in a pan. Add the onion, pine nuts, and raisins until the onion is translucent.

For the polenta:
1. Bring the water (salted) to a boil. Whisk in the polenta. Lower the heat to a simmer, add the butter, and cook according to package directions.

2. Stir in the neufchatel until melted and incorporated and add salt and pepper to taste. 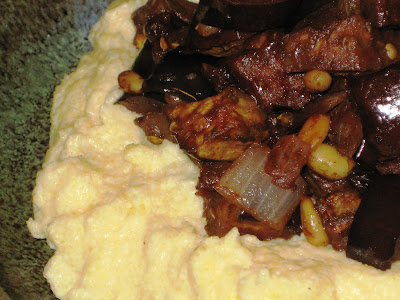