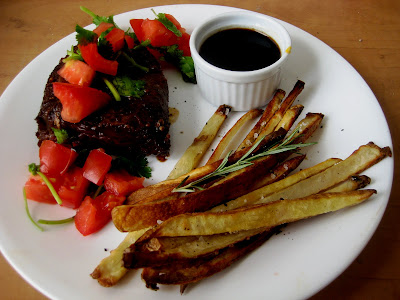 This is what I like to call third date food.

Well. Hear me out. There is logic behind this argument. (True, it’s deranged single girl logic. But logic nonetheless.) 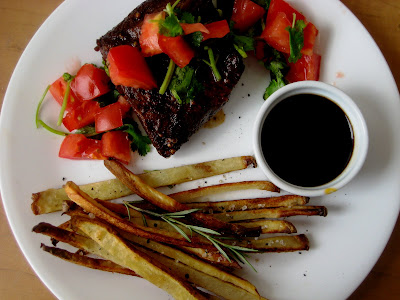 Let’s start from the beginning.

The first date. You’re cute, you’re bubbly. You enrapture him with your sharp-as-a-tack wit, your snarky comments, and your laugh-out-loud stories about medical school and cadavers and all of the other quirky things that your life seems to revolve around at the moment. You mention that you happen to cook. Relentlessly. (Which is really what gets you your “in” for the second date. All that other stuff is nice. But that image of you that flashes through his head. In the kitchen. Wearing nothing but an apron. Priceless.) A little bit of flirtation. A few beers. And he is kissing you good night (okay. Making out with you good night.). And you have this glowing feeling that you. Are. In. 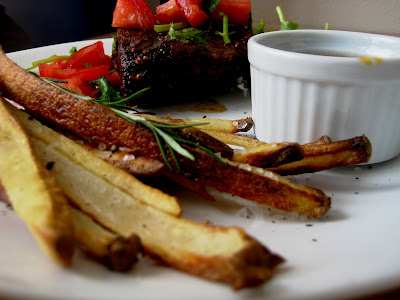 Three days later. He calls. (What is so special about the number three? Can someone enlighten me? Do you guys get a rule book that specifies that you can only do things in units of three? Harumph.)

Second date. The real moment of truth. Sure the first date gives a first impression and that’s important. But as long as you’re somewhat adorable, most guys are willing to go to the second date. From here on out, though. You are walking on thin ice.

He will be watching your every move. Subconsciously (or consciously…who knows what goes on in there) asking himself, Is she third date material?

Because there is something about that third date that really scares guys. It is the date of Commitment. (With a capital “C”). Time is money, as they say in the biz, and the third date seems to be where the cost-benefit analysis starts to kick in. You’ve already spent somewhere around 8 hours together. That third date will cross into the double digits. Meaning that, if you ask for it, you are basically saying. I’m all in. 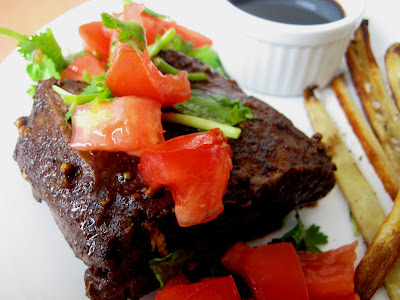 And let me tell you. Getting a guy to say that he’s all in. Is like pulling teeth.

Let me put it this way. I’ve been on quite a few first and second dates in the past year. And not a single third. (Granted, a few of these were because I didn’t want the commitment. But still.)

And so I firmly believe that any guy who commits to a third date. Deserves some kind of reward.

(It’s all about positive reinforcement people. Even if it doesn’t work out with the two of you. At least now you’ve shown him that the third date will not necessarily lead to the apocalypse (which I swear is what they think). But to really. Good. Food.)

Plus it doesn’t hurt that he won’t be able to resist falling just a bit in love with you when he bites into this. It’s that good.

Yup. You’ve just guaranteed yourself a fourth, fifth, and sixth date sister. So rock on. 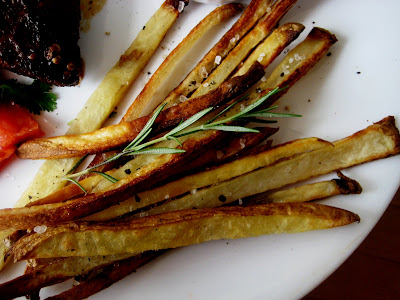 Combine the balsamic and red wine vinegars, raisins, onion, garlic, brown sugar, cloves, cumin, celery salt, rosemary, and anchovies in a large nonreactive saucepan and cook over medium-low heat until the mixture has reduced by one third. Pour through a fine-mesh strainer twice or until you have a nice smooth sauce; discard the solids. Let cool, then cover and refrigerate in a jar for up to 1 month.

Lola Fries With Rosemary
Serves 4, adapted from Live To Cook

These were originally supposed to be deep fried. And if you think I did that. Then you have not been reading this blog for very long.

Cut the potatoes into fries about 1/4 inch thick. Preheat the oven to 450. Place the potatoes on a pan. Spray them with cooking spray. Sprinkle with salt and rosemary and bake for 45 minutes.

(Note – we were also supposed to make pickled chilies with these. But mine came out really bad for some reason. So I couldn’t ruin the steak by topping it with them. Instead, I chopped up a tomato and mixed it with some salt and cilantro and called it a day. I’m pretty sure it was something I did because others have given the recipe rave reviews, so take that with a grain of salt.)

Combine the salt, sugar, coriander, and chile powder in a small bowl and coat the steaks with the mixture. Refrigerate overnight or for up to 2 days.

Remove the steaks from the refrigerator 30 minutes before you want to cook them.

Build a hot fire for your grill (or turn on your broiler). Grill for 3 minutes per side for medium rare. Remove from the grill and let rest, uncovered, for 10 minutes. (The broiler will take longer to cook them. Just keep checking them.)

Slice the steaks against the grain, divide among six plates, and top with the salad and a drizzle of steak sauce.

This is my submission to Symon Sundays! I am also sending the fries in to Reeni for her Side Dish Showdown! 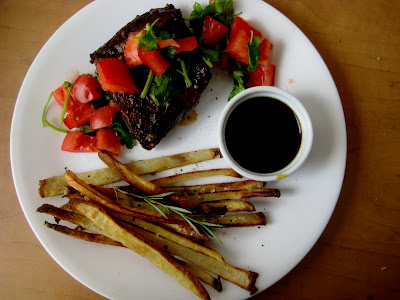 Regional Recipes: Vietnam. YOU HAVE SEVEN DAYS! Send me in your entries. PRONTO.