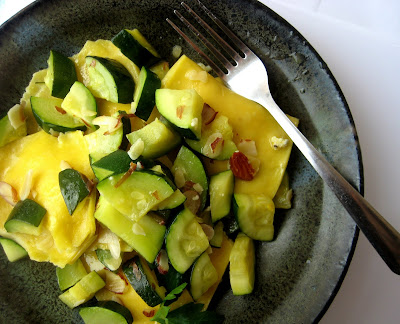 My apartment is in a semi-state of national disaster right now.  I had to hold off the feds yesterday.  Inform them that, no, we did not have a category five hurricane breeze through the building (but if we did do you think I could have had it named after me?  “Hurricane Joanne”.  It has a nice ring to it, don’tcha think?). 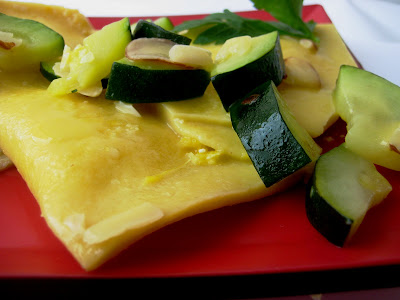 Nope, no twisters either.  Just little old me.  A pasta roller.  Half a pound of flour.  And nine egg yolks.

Which.  When taken together. Are probably more of a force to be reckoned with than “Hurricane Joanne”.  (I am woman.  Hear me roar.) 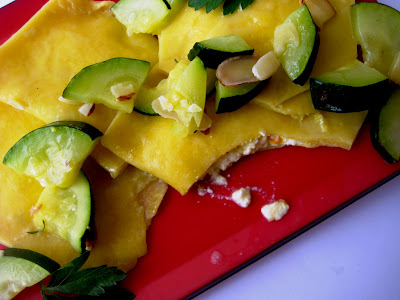 Then, of course, there’s what really happened.  Which is that my roommate Sarah is moving out in a few days (yes we are besot with sadness over here.  But she is moving to California to do her residency.  So in a way, we’re also kind of happy.  Because now we’ll have an excuse to go to Sacramento.  And a place to stay when we do!).

And so the kitchen was in kind of a state of disarray.  From all of the packing and whatnot.

And I, being myself.  Saw this disarray.  And thought.  I can top that. 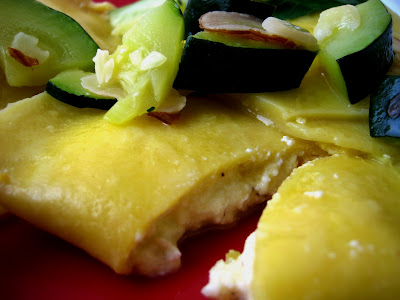 Which is why I decided to make pomegranate bagels and homemade ravioli in the same day.  Which is also why I am still trying to get the flour out of my hair.  Three.  Days.  Later.

Right now I’ve got this Einstein meets Marilyn Manson look going on.  It keeps the homeless guys on the subway away.  So you know.  I might keep it. 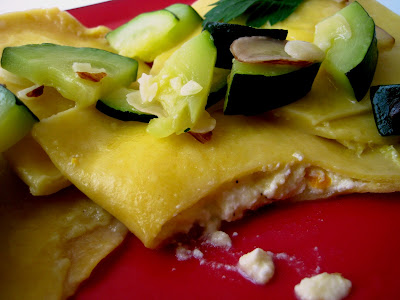 And now for the REAL real story of what happened.

Symon Sundays.  Why do so many of these recipes end with me covered in flour?  I’m not quite sure.

Anyway.  The next recipe on our list was Sheep’s Milk Ravioli with Brown Butter and Almonds.  I tried to find sheep’s milk ricotta.  I really did.  I went to Whole Foods.  Scoured the place.  To no avail.  Threw my hands up.  Sulked for a bit.  Screamed “WOE IS ME” at the top of my lungs.  Then pulled myself together and bought a container of regular ricotta at Trader Joe’s (it’s cheaper there.  And tastes better.  Ironically enough.)  I also picked up some zucchini to throw into the mix.  I felt like the dish needed a bit more green.  To balance out the saturated fat.  Or to help me forget about the saturated fat.  Or to convince me that the saturated fat was actually good for my heart.  (Because we already know it’s good for my soul.) Whatever.

This was my first time making homemade ravioli.  My second time making homemade pasta.  And luckily for me, my mom “discovered” two pasta rollers in our attic about a month ago.  One from each grandmother.  I promptly stole one.  Because, let’s be honest.  My mother doesn’t feel like she has enough time to make chicken cutlets.  Somehow I don’t think she’s going to be attempting homemade pasta anytime soon.

The good thing about this dish is that it’s amazing.  Mind.  Numbingly.  Amazing.

The bad thing is.  That it’s amazing.  Mind.  Numbingly.  Amazing. And so I might not be able to go back to store-bought ravioli ever again. 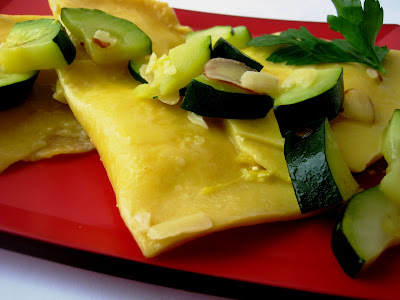 1. Mount the flour on a cutting board or counter.  Sprinkle salt over it.  Make a well in the middle of it and pour in the yolks.  Sprinkle the olive oil over the top.  Draw the flour over the yolks from the edge of the circle, continuing to mix it in until it’s all incorporated.

2. Shape into a rectangle about 1/2 inch thick.  The mixture should be dense, flaky, and crumbly.  Cover the dough with a damp towel and let it rest for 30 minutes.  Cut the dough into four pieces.  Take one piece and flatten it with your hands.  If it feels very dry (which mine did) then run your hand under the faucet shake it for a second and then resume handling the dough.  I found that this added in just enough moisture to get the dough to the right consistency.  Starting with the rollers of your pasta machine set to the widest setting, pass the dough through, five or six times, or until the dough begins to become pliable.  Continue narrowing the rollers until the dough has reached the desired thickness.   Or, if you don’t have a pasta roller but you have really large biceps.  Feel free to roll it out yourself with a rolling pin.

Ravioli with Brown Butter and Almonds
Serves 4, adapted from Live To Cook

Put the ricotta in a fine-mesh strainer set over a bowl and let it drain in the fridge over night.  Mine actually was pretty dry to begin with and so nothing happened when I put it in the fridge overnight.  C’est la vie.

Dump the ricotta into a bowl, discarding the draining liquid.  Mix with the parmesan, egg, orange zest, salt, and pepper.  Cover and refrigerate.

Roll the four pieces of dough from above through the first setting of your machine.  They should each measure about 4-5 inches wide and 18 inches long.  Lay out the sheets of dough on a countertop dusted with flour.  Along one long half of each sheet, place four 2-tsp-size dollops of filling.  Moisten the edges of the pasta with water.  Fold the unfilled side of the dough over the filling side.  Press around the perimeter of each mound to seal.  Using a pizza cutter, cut out the ravioli and place on a floured rimmed baking sheet.

Bring a large pot of water to a boil and add enough salt to season.  When the water boils, add the ravioli and boil until they float. Once they float, cook for 1 minute longer.

While the ravioli are cooking, make the sauce.  Heat the butter over medium heat in a large saute pan.  When the butter is foaming, add the sliced almonds and the chopped zucchini.

Scoop the ravioli from the cooking water with a slotted spoon, leaving excess water clinging to the pasta.  Transfer to the saute pan along with the orange juice.  Toss once or twice.

Remove the pan from the heat.  Stir in the parsley and orange zest.  Serve.

This is my submission to Presto Pasta Nights, which is being hosted by Ruth of Once Upon A Feast!  And be sure to stop by A Year In the Kitchen on Monday for the Symon Sundays round-up!

Also.  Random.  But Eats Well With Others was featured on a list of 42 blogs written by med students!  Very cool.  Feel free to check it out.

The Regional Recipes round up will be posted soon.  I promise!