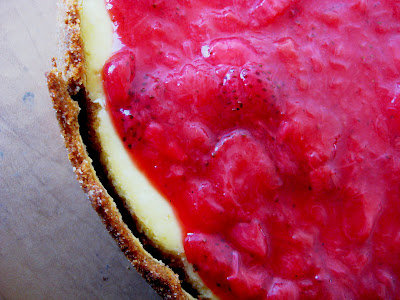 I considered calling this cheesecake Love Potion No. 9.

Or some other witty title that would relay its profound ability to get you laid. Or at least proposed to.

That is, if you actually have the self control needed to serve it to other people. And not sit with it in a corner of your room. Alone. With a fork. Not that I know anything about that… 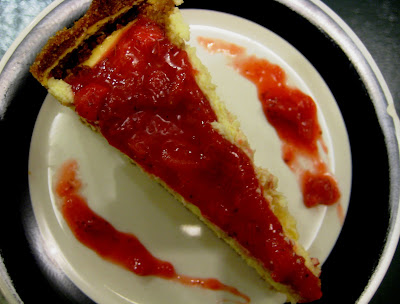 My proposal came from my friend Amma. Who is, unfortunately, both happily engaged and a female.

Although, after reading an article in the New York Times about how happily married individuals are less likely to develop chronic disease (i.e. cancer, Alzheimer’s, dementia) than both unmarried or unhappily married individuals are. (The researchers involved in the study did this REALLY cool experiment where they gave blisters to a series of married couples, videotaped them talking about controversial issues in their marriage, and then tracked how long it took the blisters to heal. In those couples who fought more viciously. The blisters took two. Days. Longer. Impaired immune function? Um. Yes.) I was ready to throw caution and my heterosexuality to the wind. And accept.

Yup. Potential homewrecker. Right here. And probably the only one who can say, “The New York Times made me do it.” 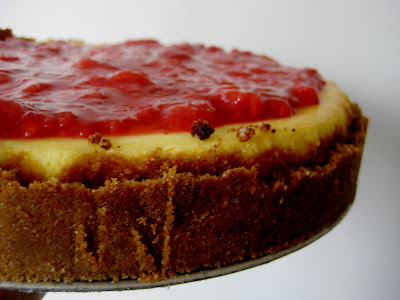 Seriously, though. I don’t usually like to serve up my food with disclaimers. But beware.

Maybe you want to get engaged.

Or maybe you have a textbook case of commitment phobia. (If so, on behalf of females everywhere. Go see a psychiatrist. And get that taken care of. We don’t have time for this! Our clocks are ticking!)

Either way. As a future doctor. I feel compelled (actually, legally bound by…you know…the Hippocratic oath for bakers) to warn you of the potential side effects. So just. Bake with caution. 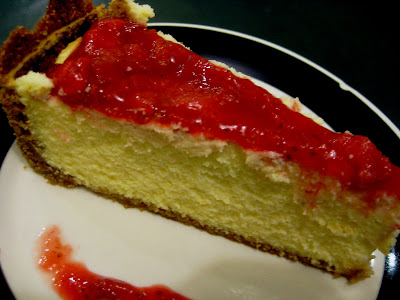 I baked this, per request, for Sophie’s birthday. She wanted a cheesecake. With fruit.

There were many internal debates over which fruit I should use (mango was on the top of the list for a while). But when I saw the first rhubarb of the season at the Farmer’s Market. I knew it was fate.

The cheesecake itself was delicious. And how could it not be with five blocks of cream cheese. (It’s not called a New York Cheesecake for nothing. It’s bold. Unapologetically so. Love that.)

But, honestly, from the feedback I got. It was the strawberry rhubarb topping that really stole the show. I had people requesting spoons so that they could eat the extra from the jar. So even if you don’t end up making the cake. I think the compote would be really delicious on a peanut butter sandwich. Or grilled cheese. Or a topping for pancakes. (Can you tell I’ve thought a lot about this?)

Rhubarb is only in season for a few months. Do it while there’s still time. I know I will. 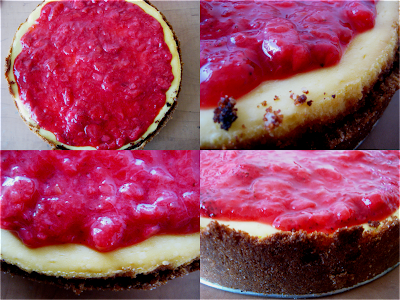 New York Cheesecake
Serves 16, adapted from Smitten Kitchen who adapted it from Gourmet

1. To make the crust – stir together all of the ingredients and press onto the bottom and up the sides of either a 9 or 10-inch buttered springform pan. Pop it into the freezer while you prepare the filling. I used a 10-inch pan, Deb uses a 9-inch. Either will work.

2. Preheat the oven to 550. Beat together the cream cheese, sugar, flour, lemon zest, and orange zest. Add vanilla. Add the eggs and yolks, one at a time, scraping down the sides after each addition. Don’t cut corners here. Scrape. It also gives you an excuse to lick the spatula after each time. Do it.

3. Put the springform pan in a shallow baking pan (or on a pizza pan, like I did) and bake in the middle of the oven for 12 minutes. Deb’s puffed up and browned, mine didn’t. I’m not sure my oven is capable of getting that hot. But if yours is, then watch it because you don’t want it to burn! If it starts to look like it’s burning, proceed immediately to the next step.

4. Reduce the temperature to 200 degrees and continue baking until the cake is mostly firm (it will still be wobbly in the middle). This took Deb an hour and me an hour and a half.

5. Run a knife around the edges of the cake to loosen it. Cool completely, in the springform pan, on a rack. Refrigerate for at least 6 hours and up to 2 weeks.

Place all of the ingredients in a medium saucepan. Boil. Cook for an additional four or five minutes or until it looks like it’s starting to thicken. Taste for lemon juice and sugar (how much of this you need will depend on how sweet your strawberries are and how tangy your rhubarb is) Remove from heat. Cool completely.

Spread over the cheesecake.

This is my submission to Weekend Herb Blogging which is being hosted this week by Winnie of Healthy Green Kitchen. 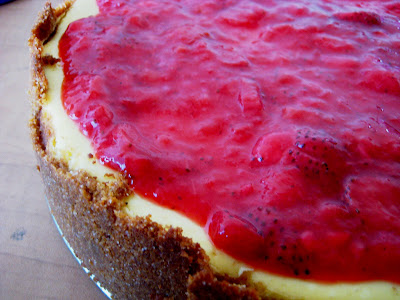