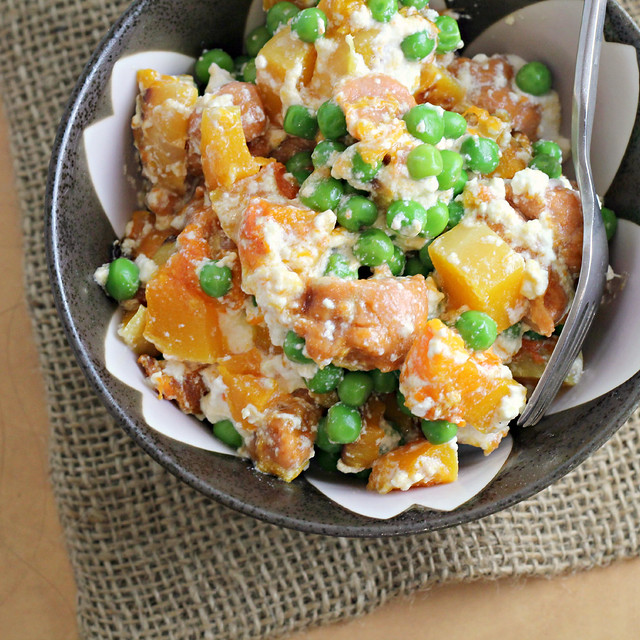 This third marathon was the marathon that wasn’t meant to happen.  Until it was.

I do suppose the third time is a charm, however, because I ran the Philadelphia Marathon yesterday.  And I can for sure say that even though, up until the minute before the gun went off, I was certain that it absolutely was NOT the race I was supposed to run…as I crossed that finish line in 4 hours 11 minutes and 48 seconds…I knew it was. 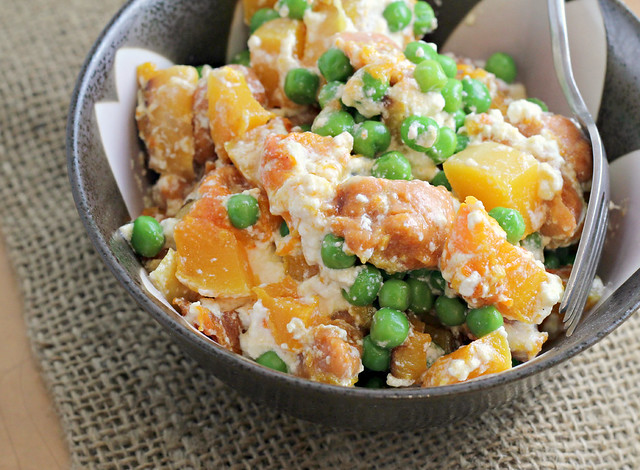 What made me most anxious about this marathon was that everything was thrown together at the last second, from hotel reservations to travel plans to figuring out how to train for the two weeks in-between NYC and Philly to packing and getting out of my apartment on Saturday morning so that The.Boy. and I could catch our BoltBus out of the city and I couldn’t help but feel that at some point, the other shoe was going to drop and that everything was going to fall apart.  That I would sprain my ankle walking down the street or forget to pack my sneakers.  That I would oversleep on the morning of the race or have severe gastrointestinal issues.  Something was going to keep me from this race, I could feel it.

But all of a sudden I found myself in Philly.  And all of a sudden The.Boy. and I were waking up on Sunday morning at 4:30AM.  And before we knew it, my friend Allison and her husband were picking us up at our hotel and driving us over to the race start.

And then we were there.  Me, Allison, and Kate.  My running partners and now sure-to-be lifelong friends.  My Team in Training girls.  We had trained together, sweated together, and laughed together all season long.  And now we were going to run a marathon together.

Really, against all odds, it was going to happen. 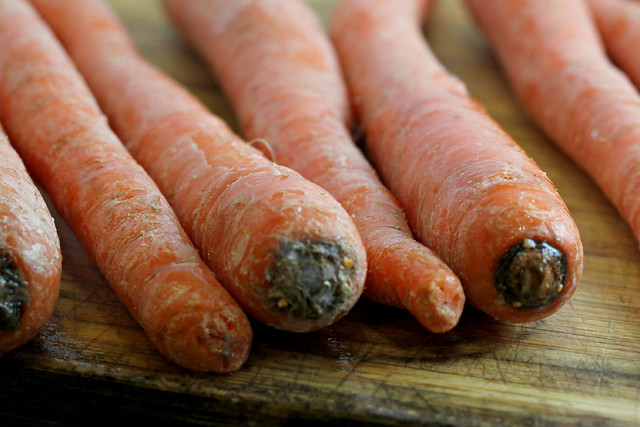 The first third of the race sped by for me.  I was with my girls, we were laughing and running through downtown Philly, checking out all of the stores that we passed, commenting on other runners and trying to hold ourselves to the 9:30 minute miles that we swore we were going to stick to, at least for this first leg.  Thankfully, because the streets were narrow and because the way Philly works is that the half marathon and full marathon start together, it was crowded enough that we couldn’t have gone much faster even if we’d tried.

The second third was trying.  My legs were starting to cramp up in weird ways and I made us stop to stretch twice.  A lot of the streets in Philly are pretty heavily slanted and I was pretty sure that had something to do with the fact that my left hamstring was tight and my right IT band and hip flexor felt like they were about to stage a revolt.  But still, we stuck together. The.Boy. jumped into the race from miles 13 to 16 and just his being there propelled me through those three miles.

And then came the final third, which is always the hardest.  But as we hit mile 19 at the 3 hour mark, I knew there was no way we weren’t going to finish strong.  At that point, it would hurt more to stop and have to start again than it would to just keep going.  So we pushed each other through.  Every time one of us said we were hitting a wall, the other two would chime in with some serious motivation.  As each mile passed, we would compare the remaining miles to the equivalent loops in Central Park, which we had run and conquered countless times.  And I know that if I hadn’t had those two girls next to me to keep me strong, I would have thrown in the towel much earlier.  I’m not sure that I’ll ever be able to run a marathon without them again.  Having them there was just too much fun.

The three of us stayed together until mile 24.5, when Kate hit a major wall and The.Boy. stopped running with us to walk with her.  Allison and I kept on together and then at mile 25 I walked through a water stop and told her to keep running if she wanted.  But then I picked it up, booking it in that last mile with an 8:58 minute mile.  And it was at that moment that I knew we had run this race well.  I had something left to give, and I was so grateful for it.

In the end, all of us finished within about a minute of each other.  And I think I can speak for all of us when I say that I loved every second of the race.  I loved the moments when I felt strong and the moments when I felt like I was going to give up, but didn’t. I loved how we pushed each other and held each other up.  I loved how we kept our morale high by cheering for other Team in Training members as we passed each other.  It was just a great race.  And, without a shade of doubt, it was the race that I was meant to run. 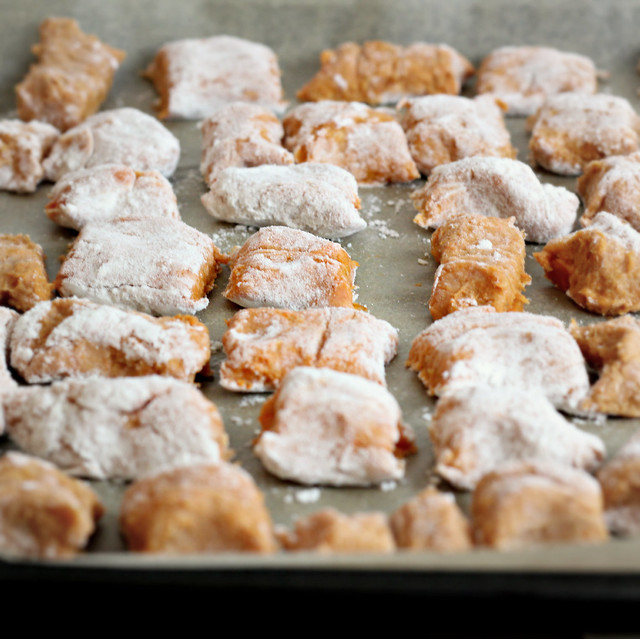 They say that running a marathon is, in a sense, like having a baby. While you’re in the moment, you swear to yourself that you will never do this ever again.

But then the endorphin rush when it’s all over is enough to convince you otherwise.  All I can say about that is, we’ll see.

I once said something similar about making gnocchi, and well. Here we are.  My first ever batch was made at the beginning of this blog and they were dense, heavy, and not the pillows of potato perfection that they should have been.  So I wrote them off as something better bought than made at home, and moved on.

Then came this week’s Food Matters Project recipe for whole wheat carrot gnocchi.  Enough time had passed since my previous potato gnocchi debacle that I thought, “hey. I can do this.”

And so I did.  Unlike my previous attempt, these were magical.  Almost lighter than air and so much better for you than your standard potato gnocchi since they are infused with beta-carotene rich carrots. I paired them with roasted butternut squash, peas and a ricotta sauce.  A meal to be reckoned with for sure and the perfect week-leading-up-to-the-marathon fuel.  (Or you know…the perfect vegetarian Thanksgiving entree.  If you’re into that kind of thing.) 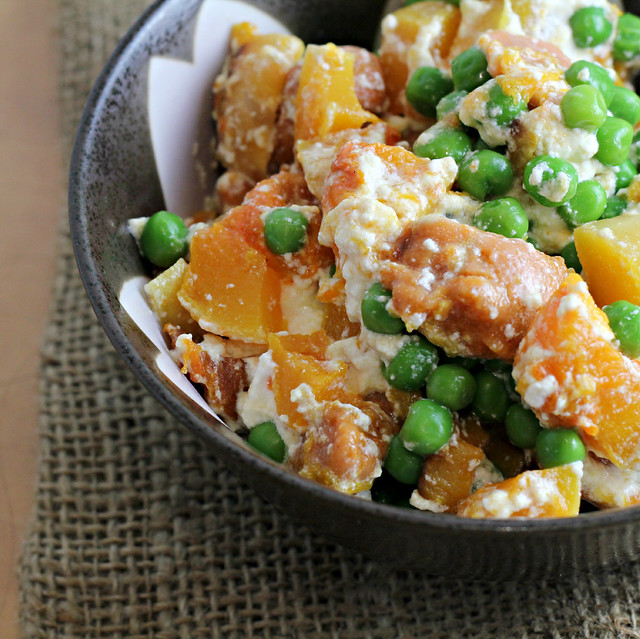 If you want to see how the other Food Matters Project participants prepared their gnocchi, then check it out here!

And…if you want to participate in this week’s 12 weeks of winter squash, then enter your link here: 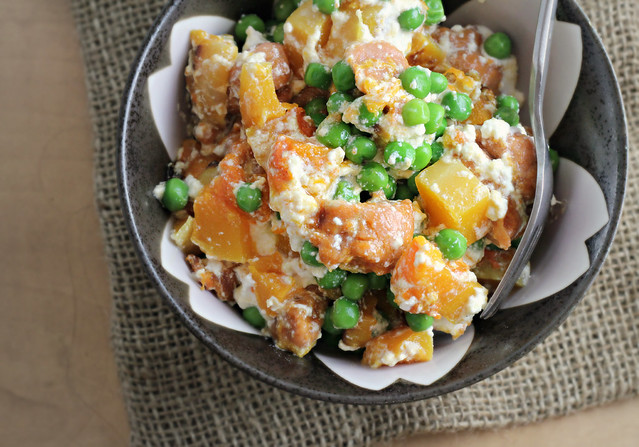 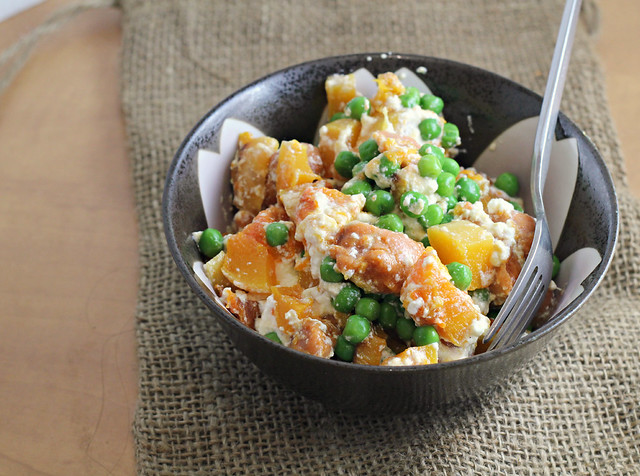