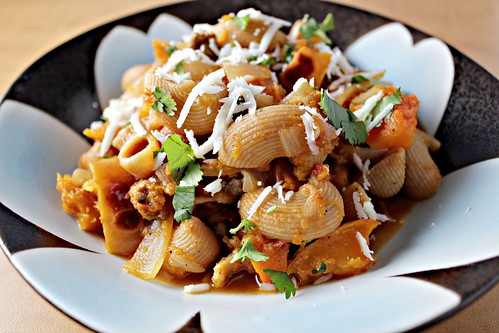 Whenever I see a pasta recipe that only calls for a half a pound of pasta and yet claims to serve 4 people.  I go batshit crazy.  Balls to the wall crazy.  Put me in a strait jacket and lock me up because that is the only way you will get me under control.  Crazy.

Really, you don’t want to be in the same room with me when this happens.  It is not safe. 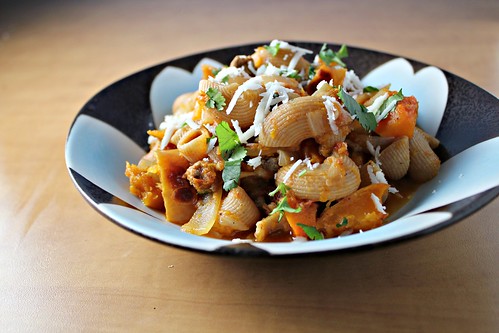 You know which recipes I mean.  All of those mac and cheese recipes that claim to be “so rich” that an eensy weensy 1/2 cup serving is all you’ll need to energize you for the day!  You’ll be able to move mountains!  Walk old ladies across the street!  Rescue cats from really high trees!

Let’s just say that I have my doubts. 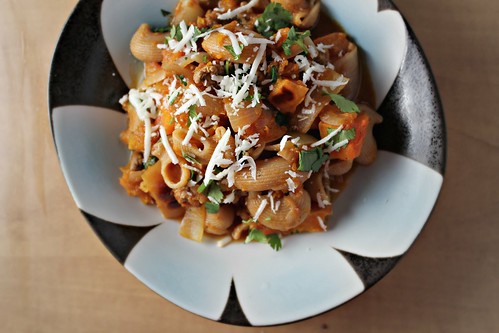 So when I saw this pasta recipe in the January 2011 issue of Bon Appetit (look at me being all on top of things and cooking from my magazines the same month that I get them!  I’m so proud.), which only calls for 8 oz pasta.  I suppressed my urge to throw the magazine across the room only by sheer virtue of the fact that it is a Bittman recipe.

And that man is one of the apples of my eye (along with Michael Symon, Mario Batali, and Yotam Ottolenghi.  And now that I’ve actually seen that list in print.  I can officially declare myself a chef whore. Awesome.).  I would trust him with my life.  And my kitchen. And my butternut squash.  That’s love right there.

Plus, Bittman is a pretty hefty guy.  I mean, yes, he’s lost some weight through his whole “vegan until 6 pm” diet plan.  But if he says that 8 oz of pasta is going to fill me up.  Then I’m wont to believe him.

Now before you go all batshit crazy on me and start saying things like, “But Joanne!  You are on a diet!  You were doing so well!  And now you’re eating…pasta.”  Well, I have some news for you.  I will never give up pasta.  Ever.  That would be a recipe for disaster that would probably end in me buying one of those pans of frozen lasagna and devouring the entire thing all by my lonesome on one rainy Tuesday afternoon.  Not good.  In addition to which, I am a runner (no matter what my calves have to say about it! Although if they would just hold up long enough for me to run the Disney half marathon on Saturday…I would be eternally grateful.  Yes.  Saturday.  I’m kind of scared, too.).  Runners need carbs.  End of story.

And if you examine this recipe a little more closely, you will see that it is jam packed with nutrients!  There are two pounds of butternut squash in it…which is double the amount of pasta and meat combined.  Virtuous is the only word I can think of to describe it.

Aside from delicious, that is. It is so wonderfully spiced with the cumin and cayenne playing off the sweetness of the butternut squash and the saltiness of the halloumi.  Another one of those meals that hits every one of your tastebuds in one fell swoop.  And you won’t even notice that there’s only half a pound of pasta in there.  I swear it. 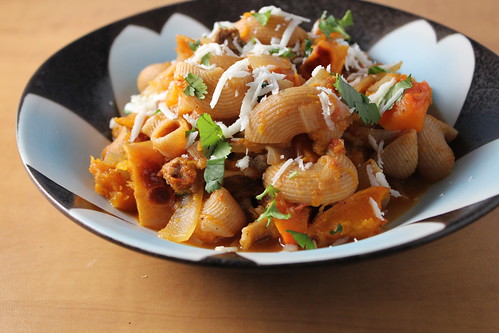 NOTE – to all my vegetarians out there, I am thinking you could probably leave out the lamb and replace it with eggplant or some mushrooms and still be very content.  And, of course, swap out the chicken broth for veggie broth.

1. Preheat the oven to 450.  Spray squash with olive oil cooking spray.  Sprinkle generously with salt and pepper and toss to coat.  Transfer squash to a large rimmed baking sheet.  Roast until tender and brown around the edges, 30-35 minutes.  Remove from oven and set aside.

2. Heat 1 tbsp oil in a large nonstick skillet over medium-high heat.  Add lamb and onions.  Saute until lamb is browned and onions soften, about 7-8 minutes.  Add garlic and the next 3 ingredients; stir 1 minute.  Stir in tomatoes and broth and bring to a boil, scraping up any browned bits.  Reduce heat and simmer until mixture thickens, about 5 minutes.  Stir in squash.  Season to taste with salt and pepper.

3. Cook pasta in large pot of salted boiling water until just tender but still firm to the bite.  Drain, reserving 1 cup cooking liquid.  Return pasta to the pot.  Add lamb mixture, half of the cilantro, and half of the cheese.  Toss.  Add reserved cooking liquid as needed to moisten (I didn’t end up using any).  Season with salt and pepper.  Transfer to bowls and garnish with remaining cilantro and cheese.

I am submitting this to Tackling Bittman and to next week’s Presto Pasta Nights, which is being hosted by Claire of Chez Cayenne. 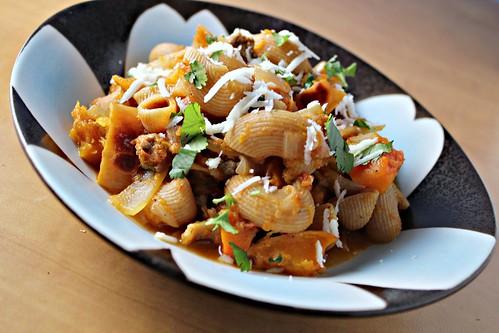