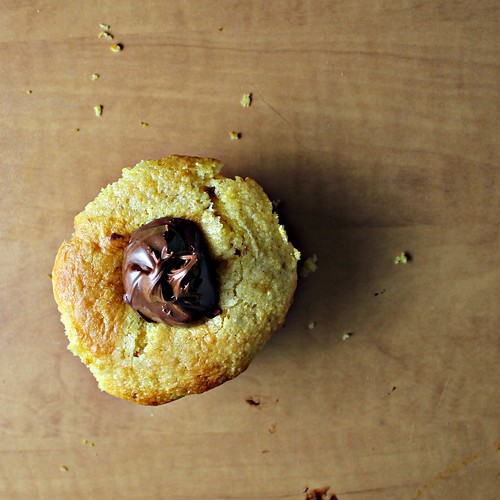 Let me explain to you what happens when I allow my imagination to run amok.

But first.  A definition. 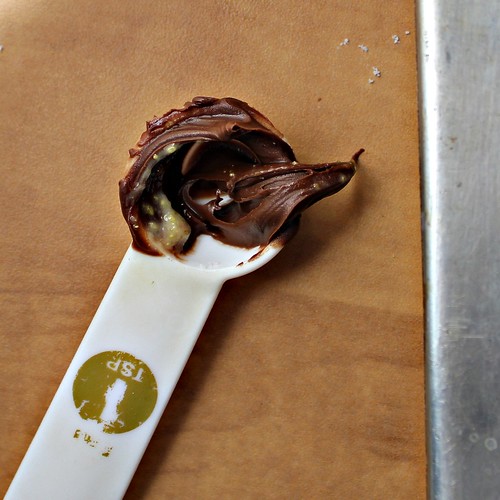 Running amok is (literally, clinically, and scientifically) a term used to describe a psychological disorder found predominantly in Malaysian culture in which an individual, usually a male, who has shown no previous angry or violent tendencies (i.e. a typical case of “he was such a nice boy” and “who would have thought”) comes into possession of a weapon and, in a sudden frenzy, attempts to kill anyone or anything he stumbles across.  Which typically continues until he is killed by bystanders or commits suicide.

(Aren’t I pleasant on Friday mornings when I am leaving in a few hours to fly to Florida to run a half marathon the weekend before I have two really big exams, all of which are filling me with so much anxiety that I’m probably going to come back with a full head of gray hair?) 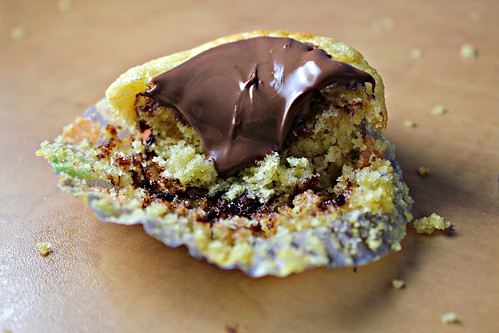 Well apparently my imagination is a Malaysian male because whenever I give it free rein in the kitchen, it heads straight to the grocery store, picks up a jar of Nutella, and attempts to spread it all over everything in its wake.  Cookies, cupcakes, chicken, a spoon (which it then mindlessly shovels into my mouth, might I add). 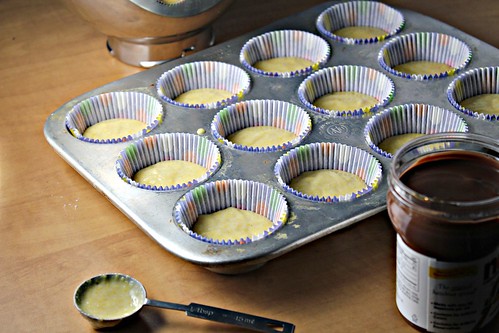 It took these wholesome little beauties.  That didn’t have even an ounce of butter in them.

They were virtuous.  Angelic.  They had greek yogurt instead of sour cream.  You could feel good about eating them for breakfast.

You see what I mean?  It’s hazardous.  It must be stopped. 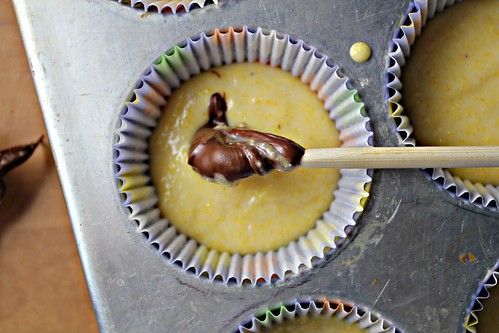 But…not before you try one of these.  I don’t care if you have it for breakfast or dessert.  But it’s the kind of thing that must be eaten.  At least once in your life.  The nutella forms a gooey fudgy mass in the middle that makes you want to die right then and there.  Of sheer ecstasy.

Just, you know.  Make sure you have some roommates around to pawn off the rest of the jar of Nutella to.  To stop the vicious cycle.  Or perpetuate it.  Depending on your point-of-view or psychological training.

Really what I mean is.  Don’t say I didn’t warn you. 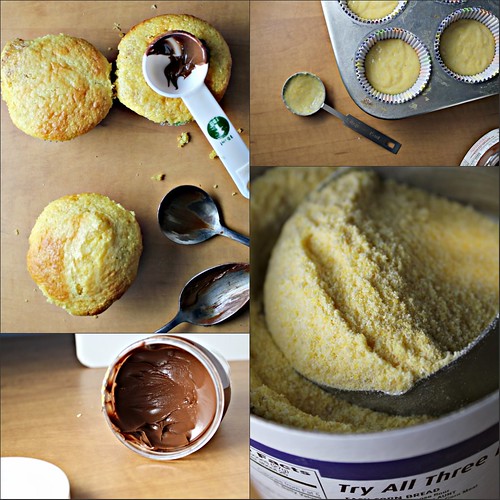 Nutella Thumbprint Corn Muffins
Makes 12 muffins, corn muffin itself from the SoNo Baking Company Cookbook, concept is an Eats Well With Others Original

1. Preheat the oven to 350.  Spray a standard 12 cup muffin pan with cooking spray/grease with butter/line with cupcake liners.  Set aside.

2. In the bowl of a mixer fitted with the paddle attachment, combine the flour, baking powder, soda, salt, sugar, and cornmeal and mix until combined.

3. With the mixer on low, add in the eggs one at a time, scraping the sides after each addition.  Add the buttermilk and oil, scraping down the sides halfway through.  Add the greek yogurt and mix to combine.

4. Put 2 tbsp or 1/8 cup batter in each muffin cup.  Put 1 tsp nutella in each muffin cup and swirl around using a chopstick or a toothpick, whichever you happen to have lying around.  Add the remaining batter to the muffin cups, trying to distribute it as evenly as possible.

5. Bake, rotating the pan about 2/3 of the way through, until the muffins are golden brown and a cake tester inserted inside the center turns out clean, 15-18 minutes.  Let cool on a wire rack for five minutes.  Using your thumb or the back of a tbsp, press down in the middle of each muffin, creating an indent large enough for you to place 1 tbsp nutella. Spoon or pipe a tbsp (I spooned) of nutella into each muffin indentation.  Let cool for another 10 minutes.

This is my submission to Dessert Wars!  Here are the prizes being offered this month:
Whisk and cupcake necklace from Moon & Star Designs

–Unlimited Layers: A Recipe for Turning Your Passion into Profits 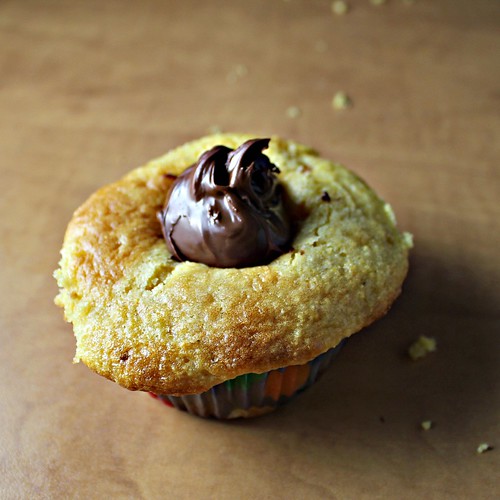