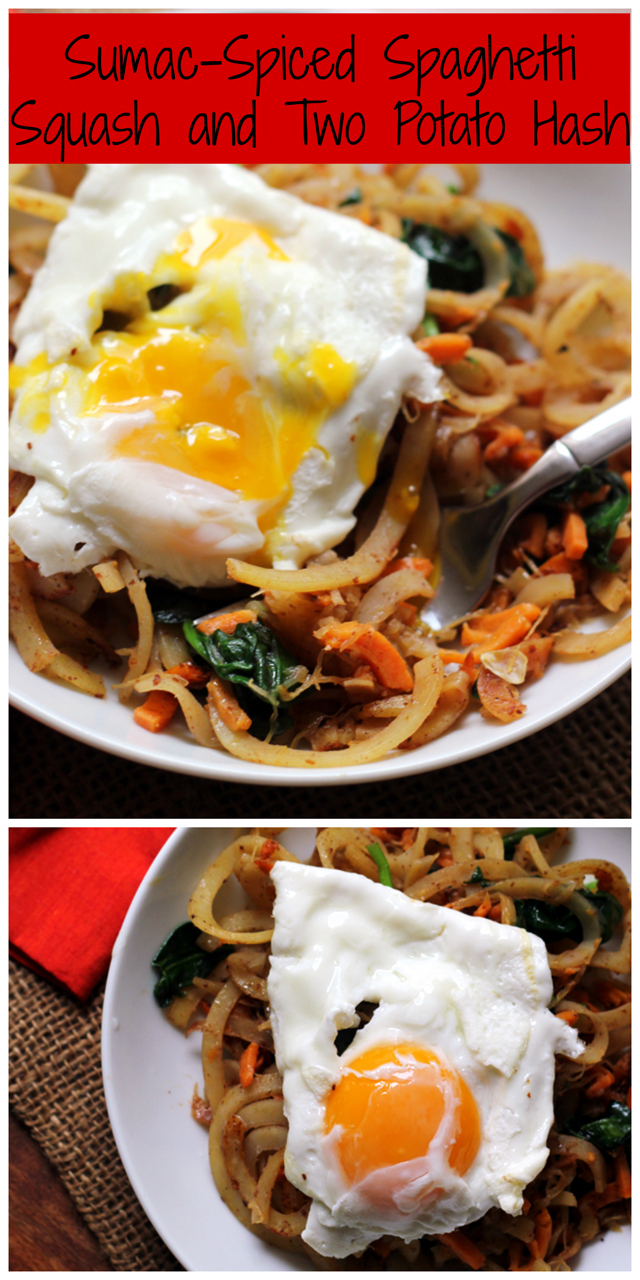 Take hash browns to a whole new level with these sumac-spiced spaghetti squash and two-potato hash! Because these are spiralized instead of diced, they get extra crispy on the outside and are quicker to cook, making breakfast even easier. 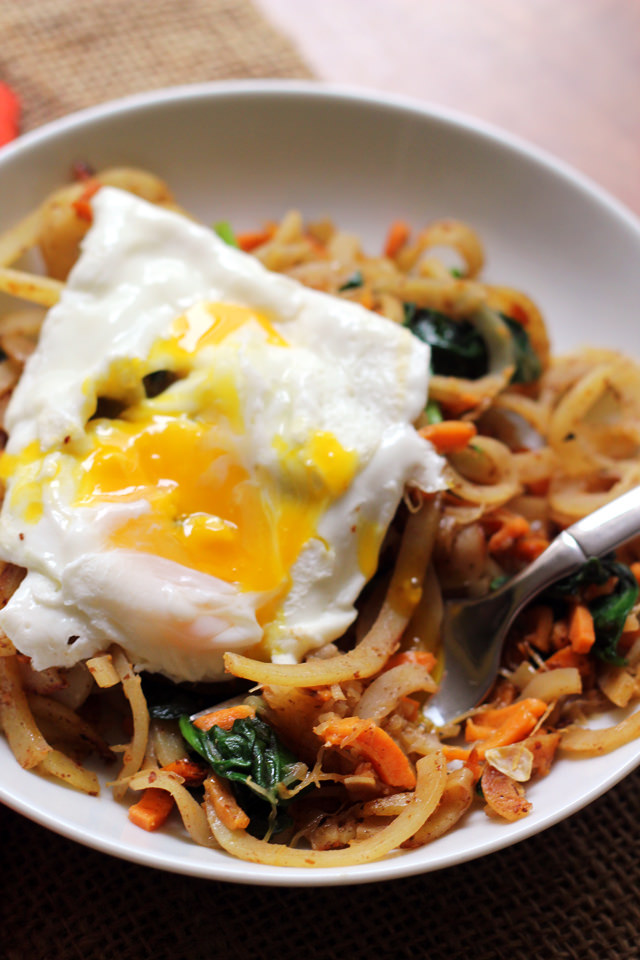 I’m surrounded by them.

It’s so many kinds of best, I can hardly take it. 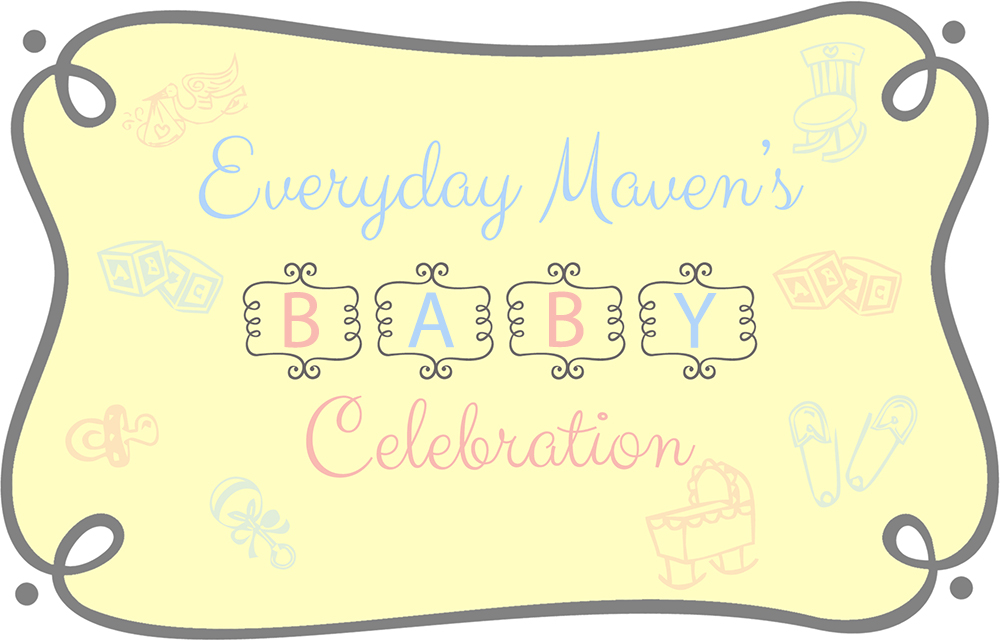 I am especially excited about babies today because one of my most favoritest bloggers, Alyssa of Everyday Maven, is expecting and we are having a big old virtual blogger baby shower to celebrate!

I first met Alyssa at a blog conference in Seattle a few years ago. We had interacted a bit on the internets beforehand, but I was really not prepared for just how much we would click in real life. It was like we had known each other FOREVER. I don’t think there was a second of awkward silence and I’m pretty sure we spent the whole weekend laughing. It was awesome.

While in Seattle, I got to meet Alyssa’s son and her husband, and I have to say that the newest addition to their family is one lucky kiddo. He is going to be SO loved!! And well fed.

Alyssa cooks up a whole lot of healthy delicious food on her blog, most of which is Paleo-friendly and grain free, so we wanted to keep to these guidelines for her baby shower! After all, it’s no fun being at a party for yourself where you can’t eat half the menu options. Am I right, or am I right? 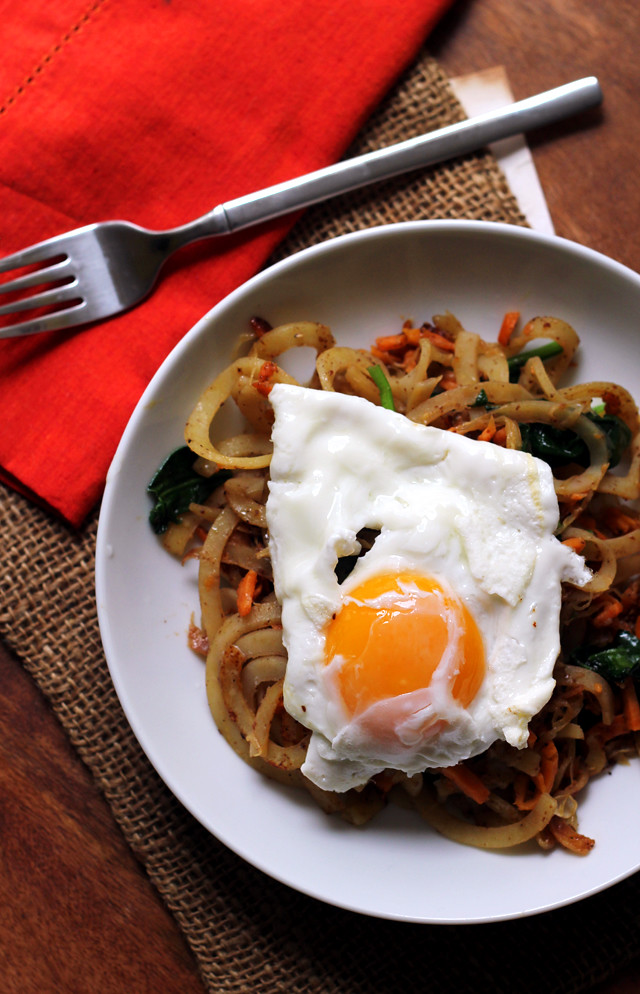 I was tasked with the job of coming up with a breakfast option (/I chose it of my own free will), and I immediately started craving hash browns. They’re my favorite part of any brunch or breakfast, namely because I find it impossible to actually make them myself. I can never achieve that crispy on the outside/soft on the inside texture without ruining one of my pans.

This led me, of course, to POTATO NOODLES. Because obviously, the more surface area you have, the more likely it is that some crisping is going to happen.  Also, the potatoes cook faster, which is always a good thing when you want to get breakfast on the table before the hangriness sets in.

This hash is actually a mixture of white potatoes, sweet potatoes, spaghetti squash, and spinach. They get all sauteed up in a big nonstick skillet until they’ve got that crispy-soft yin-yang thing going on. Then, they’re seasoned with a dash of sumac, which gives them a bit of citrus flair, and topped with whatever egg you like. I prefer my yolks runny, but the.boy absolutely does not, so we had them both ways and can attest to their deliciousness no matter what path you take. 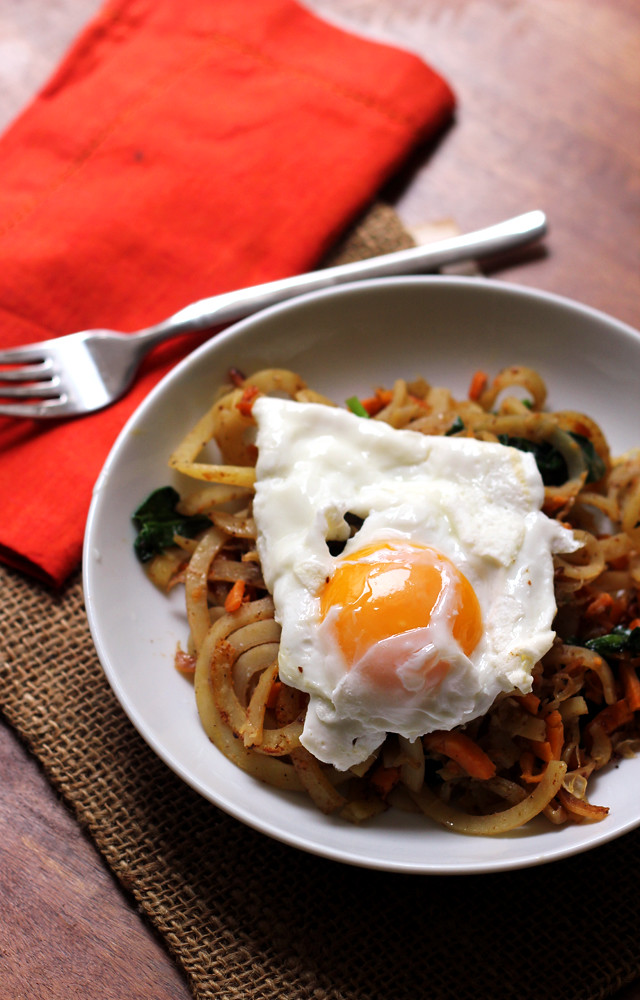 Congratulations again, Alyssa! Check out the links below to see what my fellow baby showerers cooked up! 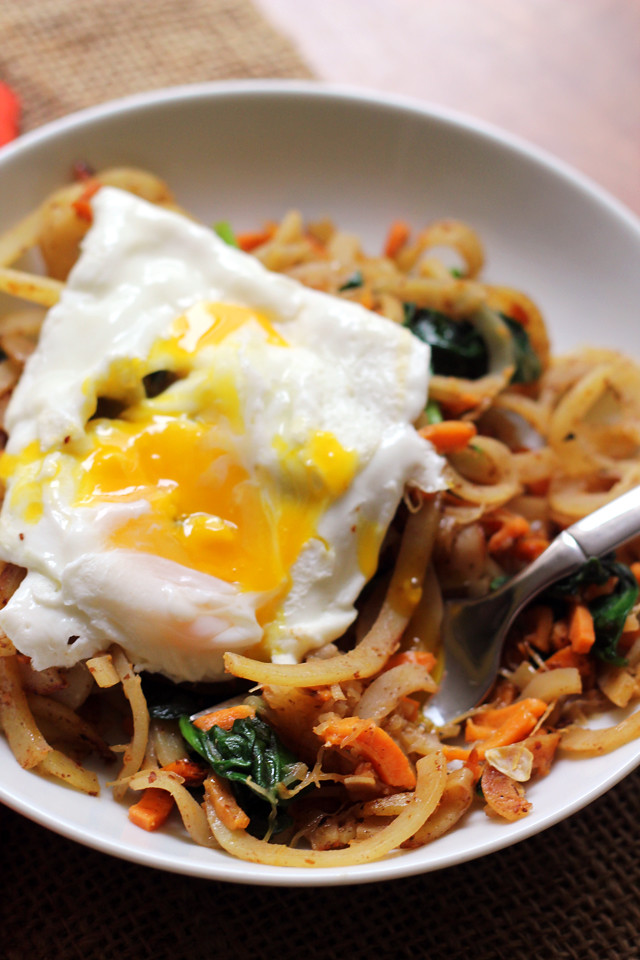 Print
Take hash browns to a whole new level with these sumac-spiced spaghetti squash and two-potato hash! Because these are spiralized instead of diced, they get extra crispy on the outside and are quicker to cook, making breakfast even easier.
Yield: 4 servings
Ingredients
Instructions
Notes
An Eats Well With Others Original
Nutrition Information
Serving size: ¼ of recipe
3.2.2885 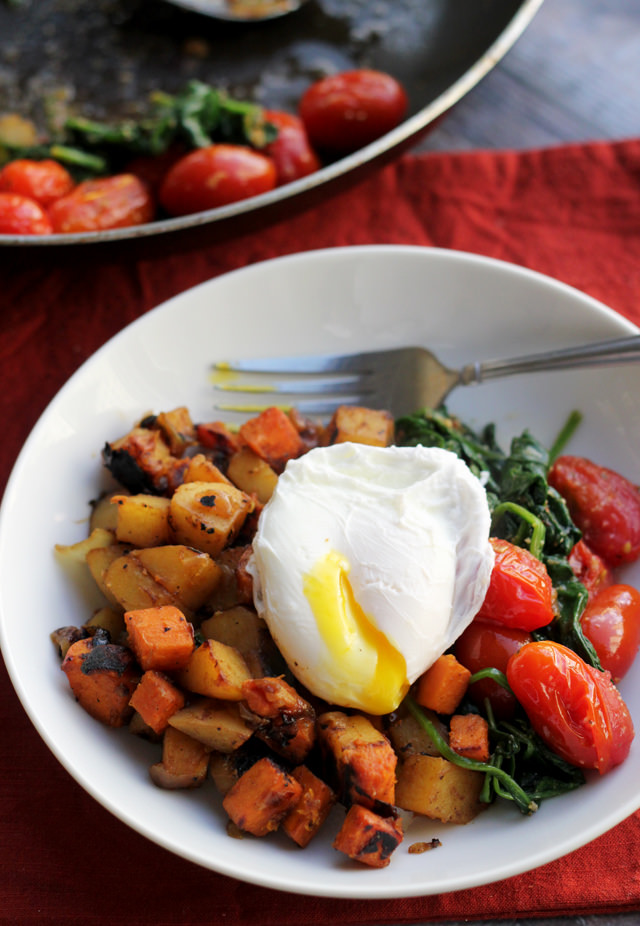 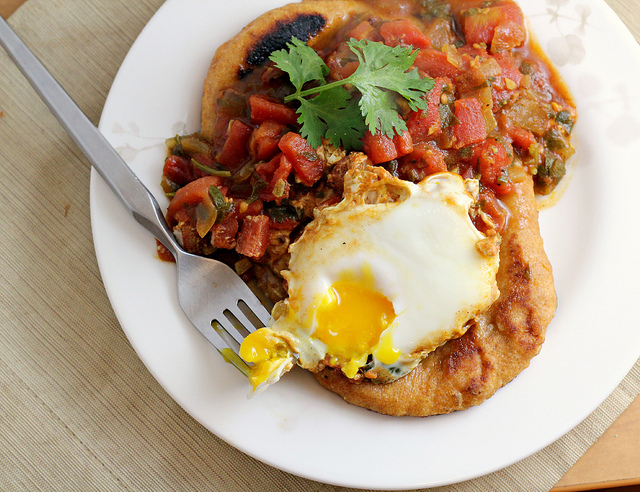 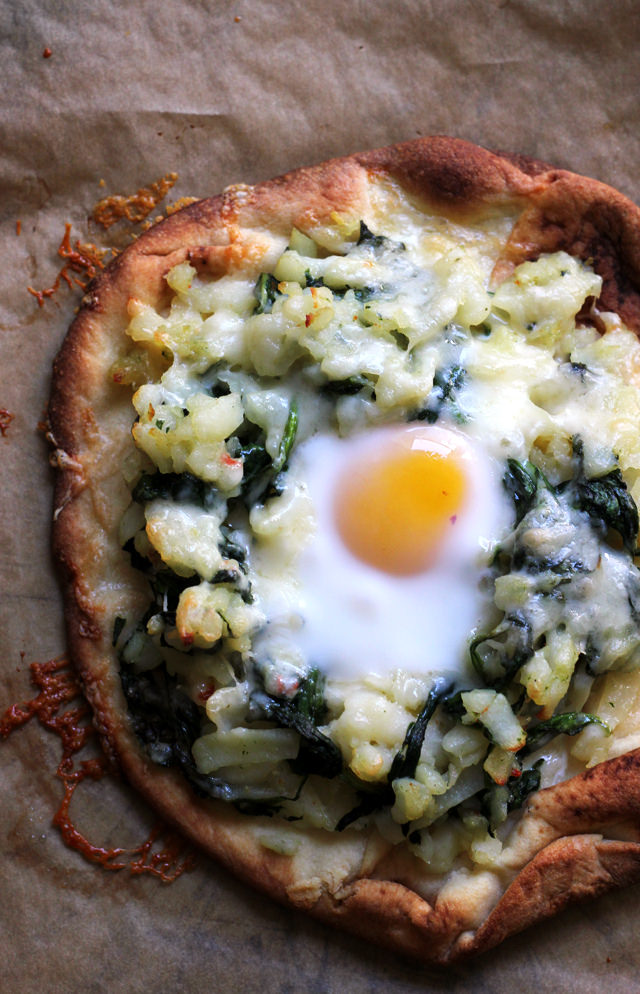 Eggs Sardou from The Curvy Carrot

Huevos Rancheros with Scrambled Eggs from The Flourishing Foodie 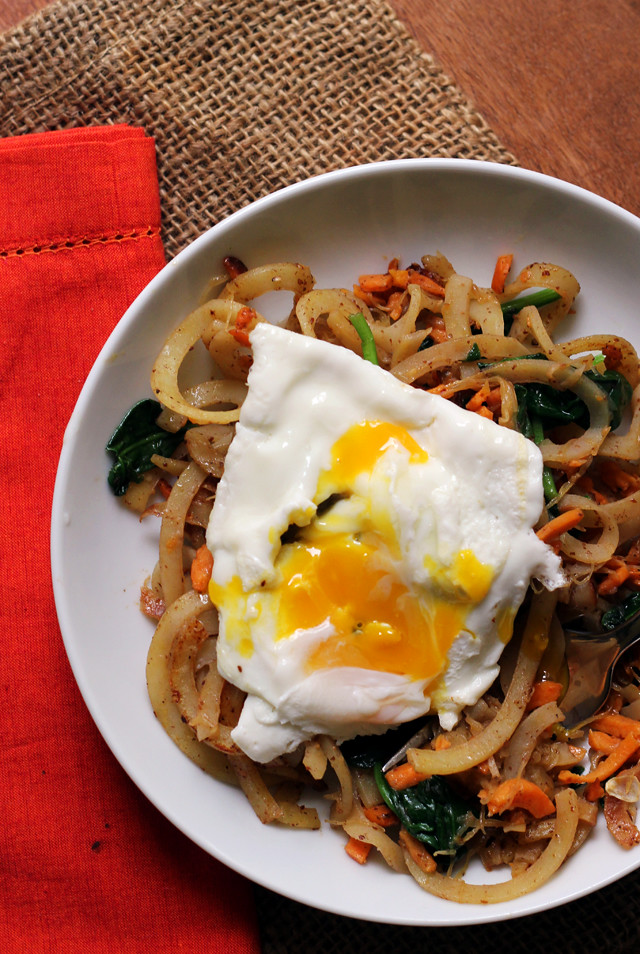