Bunny Chow a.k.a South African Curry in a Bread Bowl 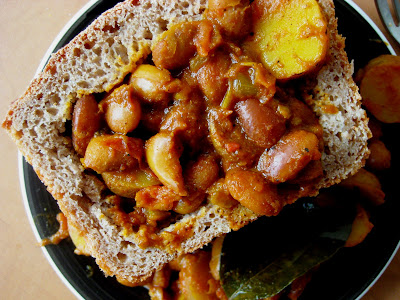 The last time I protested something. Was in high school. Junior year.

We held a sit-in because we felt our rights as students were being infringed upon (Rights? Huh? Yes, we were brimming with entitlement.) Although, I have to say, it was more fun than anything else. We sat around in an unruly mass. On the 2nd floor. Chanting.

Then, of course, there was the walk-out the year before. Most people walked out to protest the war in Iraq (we were down the block from City Hall and there was a HUGE rally going on that day…so maybe what we were really protesting was our principal not giving us the day off to protest. Hmmm.)

Or, you know. Maybe some of us didn’t attend the rally at all. And walked out so we could exercise our right to go sit in the park all day. And. Think about why we disagreed with the war in Iraq. More of a vow of silence mental protest kind of thing. What. If it’s good enough for Gandhi… 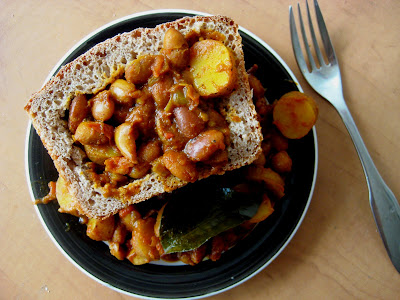 Anyway. The point being that I’m not just some crazy activist who jumps onto whatever bandwagon comes along next.

However. Something has happened that has made me…how do you say it in French? Pissed.

And that something. Is KFC’s Buckets for the Cure.

In case you live in a bubble, don’t watch television, or have moved to the Virgin Islands where there are no KFC’s. The deal is that KFC has teamed up with the Susan G. Komen Foundation (a group that raises money for breast cancer research) such that for every bucket of chicken that is bought, 50 cents will be donated to the foundation.

Maybe. Or maybe they are just further fueling the problem. 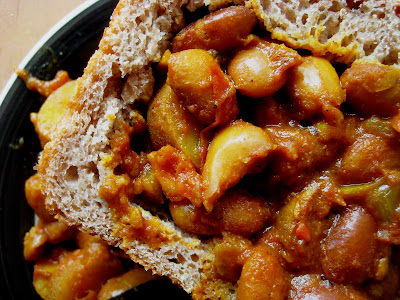 And thus. I think a better solution to this whole cancer. Thing. Would be to not eat KFC in the first place (thus taking pre-emptive steps to protect yourself). And then, donate the full amount that you would have spent on the bucket of chicken (not just the measly 50 cents that they would have donated) to the Susan G. Komen foundation.

This is what I like to call the double whammy approach. You’re hitting cancer from both sides. Gotta love that.

(NOTE – I understand that there are a lot of factors that go into how cancer develops. People can be obese and never get cancer. Or be really thin and health conscious and get it at the age of 20. But why put yourself at a higher risk, you know? Also. I’m not saying never eat fast food ever again. Everything in moderation. And if you want to eat a big mac once in a while. Eat a big mac. No judgment. But to justify eating a bucket of fried chicken every day because it’s helping to cure cancer. Just seems ridiculous to me.) 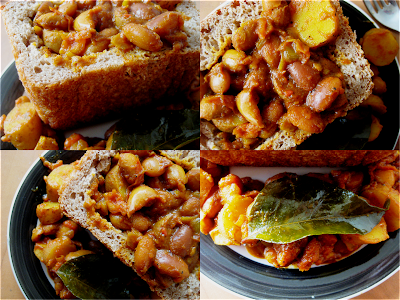 So what does this have to do with this dish? Well Bunny Chow, as it is called in South Africa, is a street food. It is served out of carts and is, for all intents and purposes, their version of a Whopper Value Meal. However. Unlike the Whopper Value Meal. It has nutritional value.

Not only that. But it tastes good. And is served in a bread bowl (homemade in this case! The HBinFive hearty whole wheat sandwich bread to be precise!).

Fast food that even I can get behind.

Needless to say, there will be even more South African food recipes in my culinary future.

This is my submission to Meeta’s Monthly Mingle, the theme of which is South Africa. It is also my submission to the next HBinFive bread braid, hosted at Big Black Dog on May 15th. And it has been yeastspotted. And I am linking this to Meatless Mondays!

1. Soak the beans overnight. Cook as directed, either via the stovetop, crockpot, or pressure cooker methods.

2. Slice the onion and dice the tomato.

3. Heat the oil. Add the cinnamon, onion, cardamom pods, and curry leaves. Fry the until the onion is light golden brown, about 5 minutes.

5. Add the beans and potatoes, along with 1/2 cup water. Bring to a boil, then lower the heat and simmer, covered, 20 minutes. Add the garam masala. Add salt and pepper to taste. Simmer for another 10 minutes.

6. Take a fresh loaf of bread. Halve or quarter the loaf, depending on how big it is (probably better to use small loaves since you need an end for this and can’t really use a middle piece). Scoop out the insides, leaving the crust to form a bowl.

7. Spoon the curry into the emptied out loaf and serve.

NOTE – for the WW bread, I made a half recipe and substituted 1 cup buttermilk for 1 cup of the water. I really liked the sweet-ish tang it gave to the loaf. 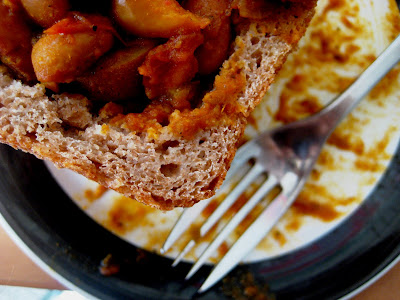 The Regional Recipes round-up has been posted! And our next country will be…VIETNAM! So please check out the announcement post for ideas on where to find recipes.

83 Responses to Bunny Chow a.k.a South African Curry in a Bread Bowl