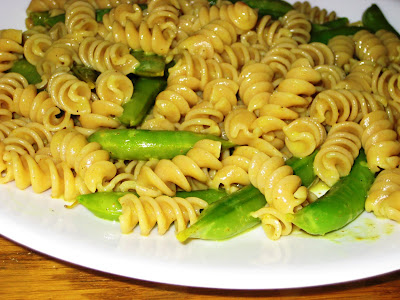 You want to hear something funny? A few days ago my father tried to convince me that it was a bad idea to buy food that’s on sale. He claimed that if meat or produce goes on sale it means that it’s low quality. Does anyone out there buy into that? Keep in mind this is also the man who, when I made tuna the other day, claimed that I should have bought chilean sea bass even though it was $16.99 a pound. I’m thinking he can’t be trusted.

I should also say that I’ve decided to do something slightly insane. I, Joanne, am going to run the Nike Women’s Marathon in San Francisco with Team In Training in October. It’s kind of scary because I have to raise a LOT of money by then but I have to keep reminding myself that plenty of other people out there manage to do it and I have the resource of NYC at my fingertips plus plenty of friends and family who will be (hopefully) willing to help out. I think it’s kind of amusing that I’m more scared of money-raising then of the actual running.

We had our first practice last night at which I met an awesome group of people who I am really excited to train with. Another reason I’m doing it with the charity (aside from the fact that I can’t really afford to pay race fees AND for a flight AND for a hotel, and because it’s sold out) is because I can’t imagine training by myself. The idea of running 20 miles for training by myself just does not sound appealing, but it sounds much more doable when you have a group of 50-100 doing it with you. 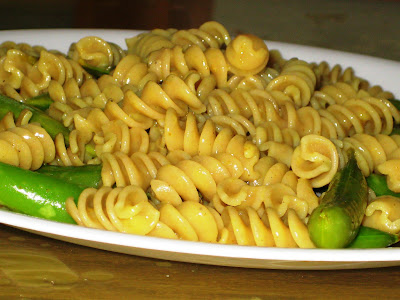 So this pasta dish was a good, but odd, combination of flavors. It started out as an attempt on my behalf to use some sugar snap peas that I had bought at the Farmer’s Market over the weekend. These babies were amazing. I don’t know if it’s because they were local but they were surprisingly sweet and could really have been eaten all by themselves. My father tried to pick them all out of my pasta because he didn’t like the sauce (he hates curry – surprise surprise) but I quickly tied his hands behind his back when I realized what he was doing.

I was kind of craving coconut milk and pasta so I did a food network search and came up with a recipe for a shrimp and sugar snap pea stir fry from eating well. I nixed the shrimp and turned the stir fry into a pasta dish. The sauce tasted better on the second day and though I liked this dish, I’m not sure it’s something I’ll make again. Those snap peas though – I WILL be buying those at the Farmer’s Market again this weekend. In bulk. 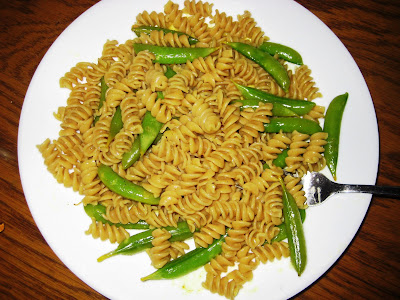 1. Boil the water for pasta and cook the pasta. Reserve water to add to sauce later.

2. Heat oil in a nonstick pan. Add the curry powder and toast until fragrant. Add the peas and cook for 4 minutes. Stir in the coconut milk, lemon juice, and salt. Bring to a boil and then simmer for 2 minutes more. When the pasta is done, pour the sauce over it. Add reserved pasta water as desired.

I am submitting this to Presto Pasta Nights, which will be hosted this week by Kait of Pots and Plots.