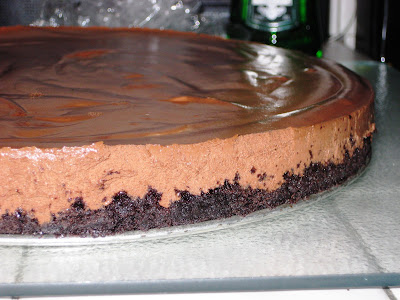 It’s on mornings like these, when I get to sleep in until 8:30 (gotta love those internal clocks) that I’m happy that I sucked it up and did my long run yesterday in the 77+ degree heat rather than have to wake up at 6AM to do it this morning. TNT’s practice was canceled today because of a race in Central Park that we had the option of signing up for (but it cost money and was only 4 miles so I didn’t). This also meant that I got to stay up late last night! My roomies and I had a “roomie night” where we made sushi together, talked for a few hours, and just got to know each other a little better. The night ended with a game of Scrabble and some red wine that half of the MD/PhD class showed up for. Yes we are nerds who play scrabble on Friday nights. Deal with it.

Earlier this week we went to this jazz club called Dizzy’s which is in the Time Warner building and is affiliated with Lincoln Center. It was the first time I had ever been to a jazz club and I really liked the atmosphere of just sitting, relaxing and listening to music, quietly chatting with the person next to you, and sipping a beer. I should have gotten ice cream instead of the beer though. It definitely would have made me happier. But I realized that only after tasting some of Anu’s banana parfait so I had to make do with my Stella.

So I guess you’ve noticed this but somewhere along the line, I gave up my hardline approach to healthy cooking and starting baking. Sure, I make the traditional substitutions of swapping out half the butter for applesauce or using reduced fat cream cheese, but a year ago you would not have caught me within ten feet of a cupcake pan. Oh how times have changed. But I think that I have finally reached the point of everything in moderation, not accompanied by a side of guilt.

And thus we have this chocolate mousse pie that I made for my father’s birthday – the first recipe for which I made absolutely no healthy substitutions. And it was awesome. Worth every bite. He had two slices. I had one plus my brother’s oreo crust. If you don’t make this within the next few days, you will be sad. So get to the kitchen! 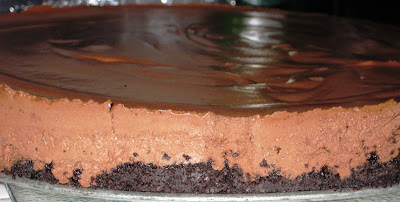 For the crust: Preheat the oven to 350. Butter a 9-inch (I think I used a 10-inch) springform pan. Finely grind the cookies in a food processor. Add butter and process until evenly moistened. Press crumb mixture onto bottom to form a crust. Bake for 5 minutes. Let cool.

For the mousse: Combine chocolate, vanilla and salt in food processor. Bring 1 cup cream to a boil. With processor running, gradually pour hot cream through feed tube and process until chocolate is melted and smooth. Transfer to a large bowl. Cool to room temperature, stirring occasionally.

Beat 2 cups cream and sugar in a large bowl until stiff peaks form. Fold into the chocolate mixture. Pour into prepared crust. Chill about 6 hours.