Tunisian Chicken with Raisins and Lemon 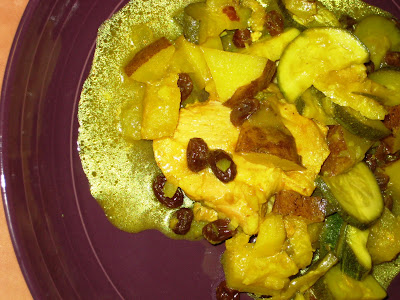 Frank Bruni, a new food columnist over at the NYTimes, wrote a piece on Wednesday about the strange mannerisms and idiosyncrasies his friends take on when invited to eat with him at a restaurant review. People become very protective over whatever dish they are instructed to order, wanting only to have ownership over the more elegant or pricy dishes (steak is always a hot item) and scorning simpler fare like the pasta or vegetarian entrees. Never mind the fact that no matter what they order, they will only be eating a quarter of it and will also have to eat a quarter of everyone else’s. (It is a very communist system that Bruni has in place where everyone is created equal and no patron is left behind.) What makes this even more amusing is that no matter what dish a person ends up being paired with, he becomes very protective of it and will argue tooth and nail that it is superior to every other. People are strange, is what Bruni concludes, and somehow inevitably see the dish that is set before them as an extension of themselves, hence the desire to not only order the heftiest dish but then to convince everyone else of it’s decadence before the night is through. As if that will give them some kind of acclaim.

This all got me thinking about my own meals and whether or not I feel the same way about the food that I produce. Take this Tunisian chicken with raisins and lemon, for example. I had bought extra chicken, so I invited my friend Anu to come over and eat with me. Having never made the recipe before, I was a little nervous, but I knew that she would be forgiving if it didn’t quite turn out. Okay. Fine.

Observation one. Anu comes over after a day at the lab, sets her backpack down by the table and joins me at the stove, asking me what I’m cooking. I point out the recipe in the Bon Appetit cookbook and she becomes very impressed by the word Tunisian in the name, immediately jumping to the conclusion that the dish will be a complicated and other-worldly masterpiece. Tunisian food somehow calls to mind images of the exotic, strange and unusual. I mean, let’s be real, who has ever actually had authentic Tunisian food before? “This is going to be intense,” she says confidently, in a way that suggests that she feels very proud to be the recipient of such a feast. As if my choosing to invite her over for this specific meal is somehow a commentary on my end about her adventurousness as an eater. (She is a very adventurous eater, which is one of the many reasons why adore her, but that’s not quite the point.) The ironic part of all of this is that the recipe actually only calls for about 5 real ingredients (all of which are common pantry items) and one spice (turmeric). Not exactly intense. Probably not authentic either, but like I said, we wouldn’t know the difference.

Observation two. At the dinner table. After the cooking we pour ourselves a glass of wine and sit down to eat. Anu waits patiently while I photograph the food, offering up her plate as the more aesthetically pleasing of the two. And then we eat. I start ponderously, thoughtfully, thinking with every bite about how I feel about the dish. She begins raving with the first bite, “Oh my gosh, this is so good. I am amazed.” Now this is music to every chef’s ears, but it also fits all too well with Bruni’s theory. Perhaps she feels that because the meal was cooked for her, it is her dish and thus she must wax poetic about its qualities for fear that if I disregard it as being somewhat pedantic, I will do the same to her as well.

In reality, the dish was good, not great. It featured a good, simple combination of flavors that went well together but was really not something to write home about. I kind of wish the sweetness of the raisins had gotten infused in the sauce more so that you really got that sweet and sour quality when it mixed with the lemons. What it was good for was a study on human behavior and a reminder of how important food is within the context of our social interactions. It influences us in ways that we cannot even realize and somehow manages to delve deep into our subconscious.

The moral – be careful what you cook and who you cook it for. It may have a far great impact than you know. 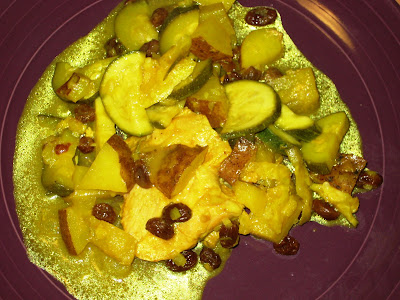 Arrange chicken in a single layer in a heavy pot. Drizzle oil over it. Tuck the potatoes in-between the chicken. Sprinkle with garlic and turmeric, then salt and pepper. Lay lemon slices over it. Sprinkle with raisins. Pour enough broth over it just to cover it. Bring to a boil. Cover and boil for 10 minutes. Uncover, add the zucchini on top, reduce heat to medium and simmer until chicken is just cooked and potatoes are tender, around 20 minutes. Remove the chicken, potatoes, and zucchini to a platter. Tent with foil to keep warm. Add lemon juice to the pot and boil until the cooking liquid has reduced by half and thickened, about 7 minutes. Season with salt and pepper. Pour over chicken and serve. 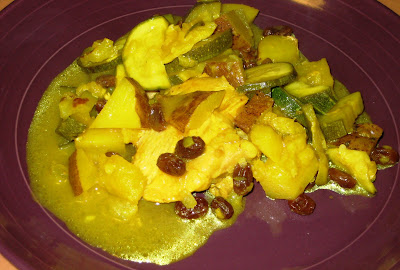 18 Responses to Tunisian Chicken with Raisins and Lemon