Caprese Sticks and Homemade Marshmallow S’more Sticks…Review of On A Stick! 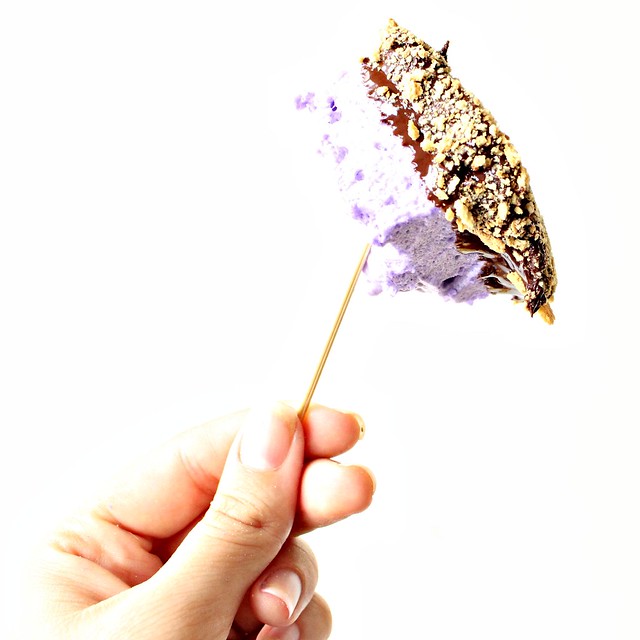 This weekend, it was just too hot to figure out how to use a knife and fork.

(I realize that’s something I should have been taught years ago.  And I’m sure I was.  But I’m just a spoon/eat-with-your-hands kind of gal.  And so it’s been years, people.  Years.

Apparently, it’s not like riding a bike.  You don’t just wake up one day and remember.  Once it’s gone, it’s gone.)

So when my Team In Training mentor buddy, Pam, and I decided to co-host a dinner party for our new mentees.  I did my best possible to avoid showing the world (which consists entirely of my teammates, coaches and physical therapist) just how culturally inept I can truly be.

Sticks.  I thought.  Sticks are the way to go. 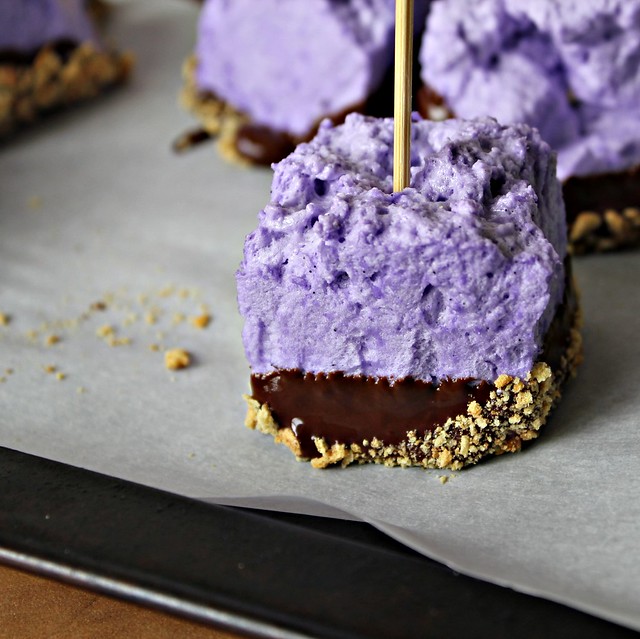 Quite fortuitously, I was recently sent Matt Armendariz’s On A Stick to review.  It was like a treasure trove of prevent-Joanne-from-embarassing-herself recipes.

You can find a way to eat anything on a stick, is what I instantly realized upon paging through it.  Mojitos, waffles, pasta.

Really, it was eye-opening.  (And eye pleasing seeing as how every recipe is accompanied by a stunning photo!)

I might never have to be that weird girl sitting in the corner eating lasagna with her fingers ever again.  Which means I might actually go on a date in the next century or so.

This book.  Is.  Life-changing. 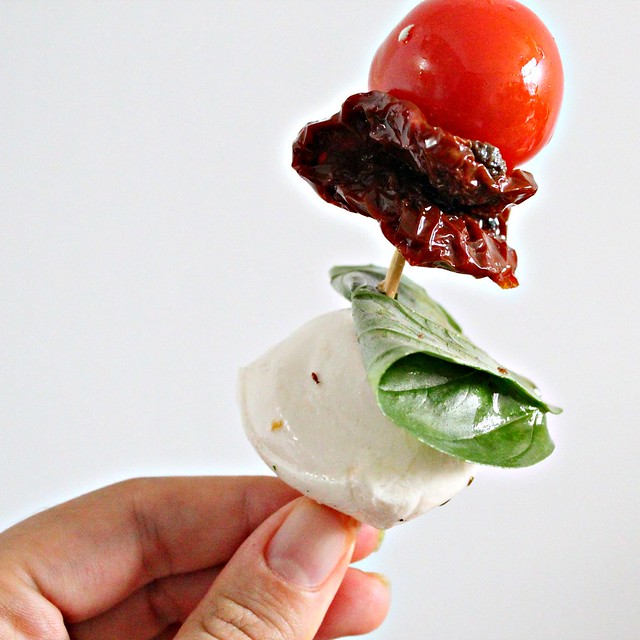 For the party I prepared lots of finger foods (enough for the 20 people we were expecting to have!), which I’ll share with you in good time.  But the sticks were some of my favorites.

Not only are they delicious and fun, but they serve as prime blackmail photo ops when olive oil inevitably ends up dripping down your coach’s chin and marshmallow somehow finds its way into your physical therapist’s hair.  And you’ve just happened to have brought your camera because, well, you’re a food blogger.  That’s what you do.

And, possibly the best part, when you’re done eating, you have a stick.

You can duel with it.

You can use it in lieu of mace when you’re running in Central Park at weird hours of the afternoon and are affronted by various members of NYC’s homeless population.

Multi-purpose. I love it. 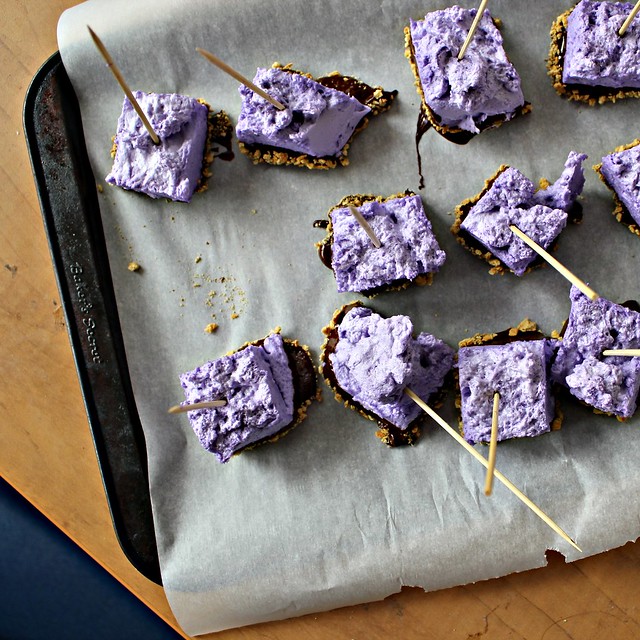 On A Stick is divided into two sections – savory sticks and sweet sticks – and I knew I wanted to make one recipe from each.

The savory section is fairly meat heavy and while I would be okay just substituting tofu in for beef, I had a feeling that wouldn’t quite fly with the omni crowd I was cooking for.

So I went caprese.  You can never go wrong with caprese.  Mozzarella, tomato, and basil?  That is the holy trinity of summer food.  What makes these extra special is the sun-dried tomato touch.  It provides a great textural and flavor contrast and adds a bit of complexity to the caprese that we all know and love.

The sweet section proved to be much more difficult to pare down.  After much hemming and hawing and nail biting, I decided on marshmallows.  Because, while the caprese sticks were a safe bet, choosing to make marshmallows for 20 people when you’ve never ever before in your life even thought about making marshmallows?  Just a tad bit risky.

The idea kind of stuck especially when I realized that I could dye them purple, which is Team In Training’s color.  There was no going back after that.

Thankfully. Because these were also a huge hit.  It might have something to do with the “wow factor” of homemade marshmallows.  But then, there’s also chocolate and graham cracker crumbs.  And let’s be honest.  Can you resist these three things when combined?

Given how many of these sticks I ended up inhaling. I obviously can’t.

At least I have an ample supply of ammunition to show for it.  Which is good.  Because after realizing how much I ate…there are a lot of Central Park runs in my future.  A. Lot. 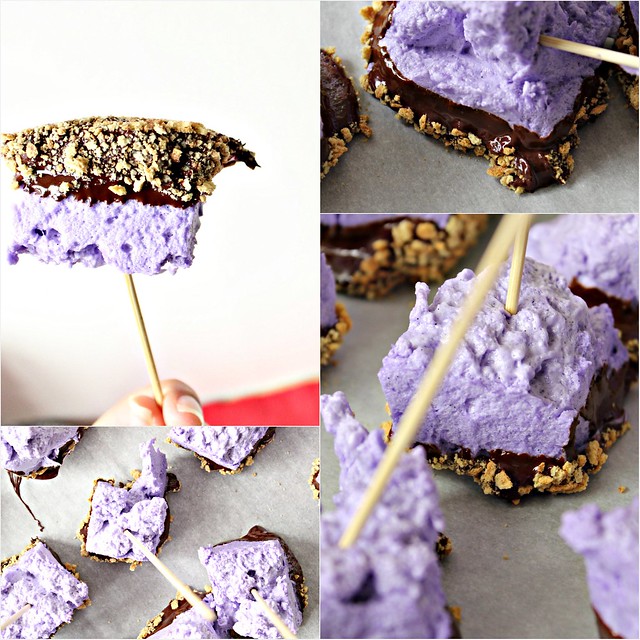 Homemade Marshmallows
Makes 1 9×13-inch tray of marshmallows, adapted from On A Stick

2. Place sugar, 2/3 cup water, and corn syrup in a small saucepan over medium-high heat.  Bring to a boil, stirring, and cook until sugar dissolves and temperature reaches 240.

5. Pour mixture into baking sheet or dish and refrigerate until stiffened, about 3 hours.

S’Mores Sticks
Makes 1 9×13-inch tray’s worth, adapted from On A Stick

1. Line a baking sheet with parchment paper.  Place graham cracker crumbs in a shallow dish and set aside.  Spear marshmallows with sticks (if not already speared).

2. Melt chocolate chips in a double boiler over medium heat, stirring occasionally. Allow to cool to room temperature.  Dip marshmallow sticks in chocolate, one at a time, and let excess drip fall off.  Roll in graham cracker crumbs adn place on prepared baking sheet.  Serve immediately.  Or, if you’d like the chocolate to set, refrigerate about 1 hour before serving. 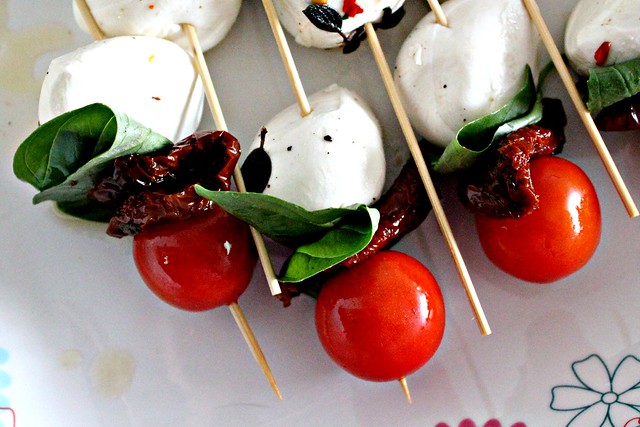 Caprese Sticks
Makes 12, adapted from On A Stick

1. Arrange mozzarella balls, both kinds of tomatoes, and basil leaves onto cocktail picks, mixing and matching in varied combinations.

2. Before serving, sprinkle with sea salt and a quick drizzle of olive oil, if desired.

DISCLAIMER: Although I received this cookbook for free, I did not receive any monetary compensation for doing this review. My thoughts and feelings on it are entirely my own. 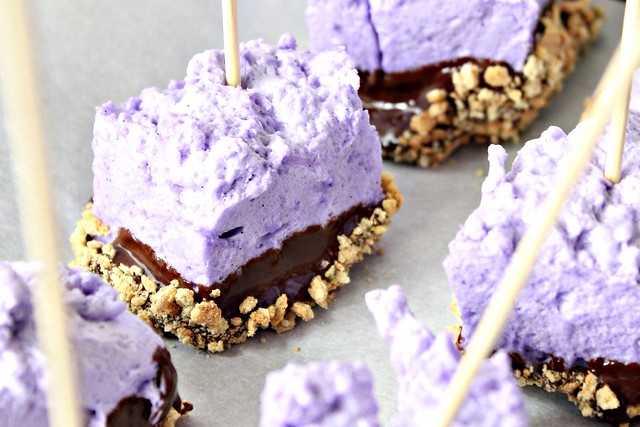 81 Responses to Caprese Sticks and Homemade Marshmallow S’more Sticks…Review of On A Stick!