Wheat Berry Salad with Zucchini and Mozzarella…Happy 4th of July! 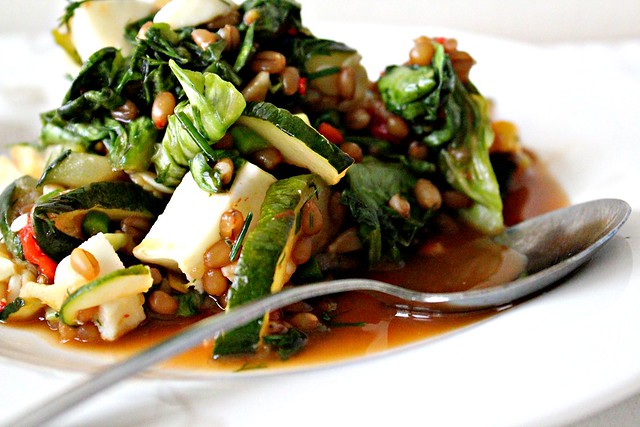 I may be going color blind.

At least twenty-two times this weekend, I attempted to bookmark red, white and green food in my google reader.  And label it as “4th of July Friendly”.

Only to hit myself over the head within five minutes when I remembered that the American flag is not, in fact, red, white and green.  And no amount of mislabeled recipes is going to change that. 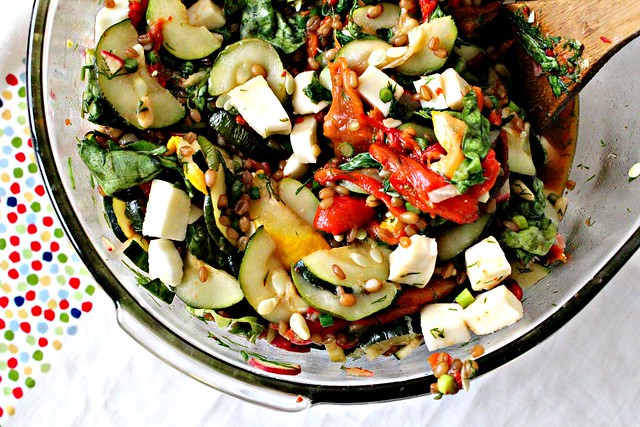 So, you see.  There’s obviously something funny going on with my neuronal synapses.  And being the good, conscientious medical student that I am.  I’ve made a differential diagnosis. 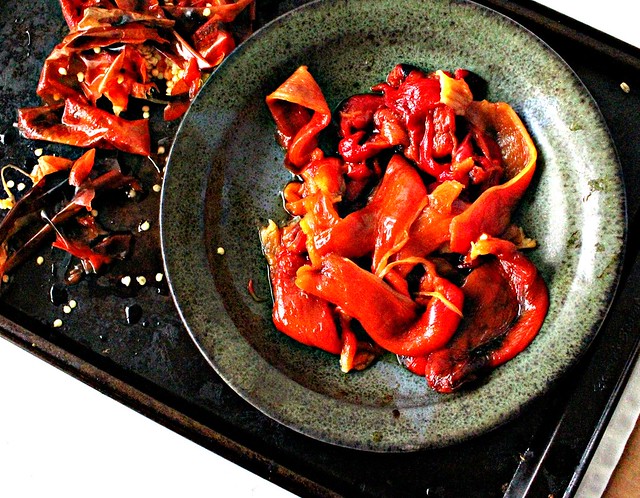 Option 1: Late onset post traumatic stress disorder-induced retrograde amnesia.  (The trauma in question, of course, being the boards.  It always comes back to the boards.)  The idea being that I’ve somehow forgotten everything for the past six months and so my brain is convinced that it is not only December, but Christmas season.  And that I, apparently, now live in the southern hemisphere, which is the only way it could ever rationally be 90 degrees during the holiday season.

Not that anything about this is rational.

But if I start baking mass amounts of cookies and muttering about kangaroos.  You’ll know why. 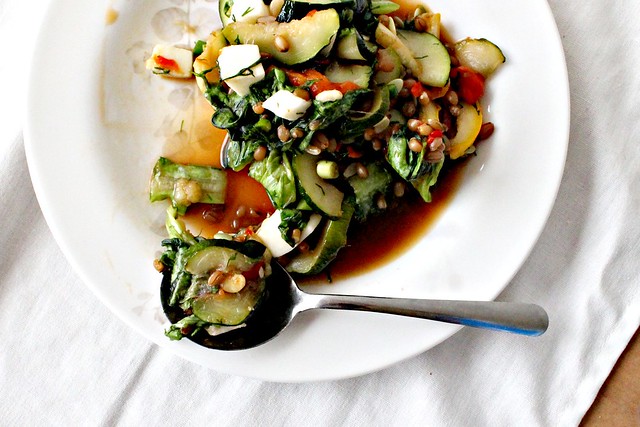 Option 2: Dissociative identity disorder.  In which part of me believes that I am actually an Italian citizen and that we are celebrating Italian Unification Day this weekend.

(This is also called wishful thinking.)

This might explain why I’ve ultimately decided to bring pasta salad to my parents’ barbecue today.

However, that might also be because that is the only meatless dish I can get my father and brother to eat.

Hmm.  Too many confounding factors. Let’s move on. 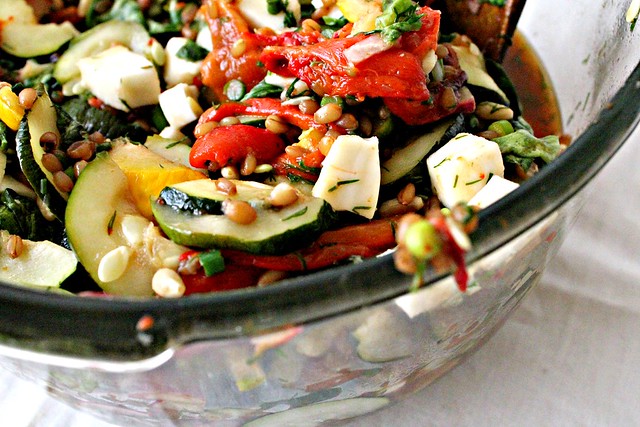 Or syphilis (impossible given the unfortunate circumstances of my extended term of celibacy).

Or Lyme disease (equally, if not more impossible than syphilis given my disdain of the wild outdoors and dirt and bugs).

Or pregnancy (see note on syphilis, above.)

Or, if this were House, it would actually be due to (e) none of the above, but rather to some weird esoteric bacteria that is normally endemic to tropical environments but that somehow weaseled its way to the northeastern US and into my intestines.  Probably via the obscene amount of mangoes I eat on a daily basis. 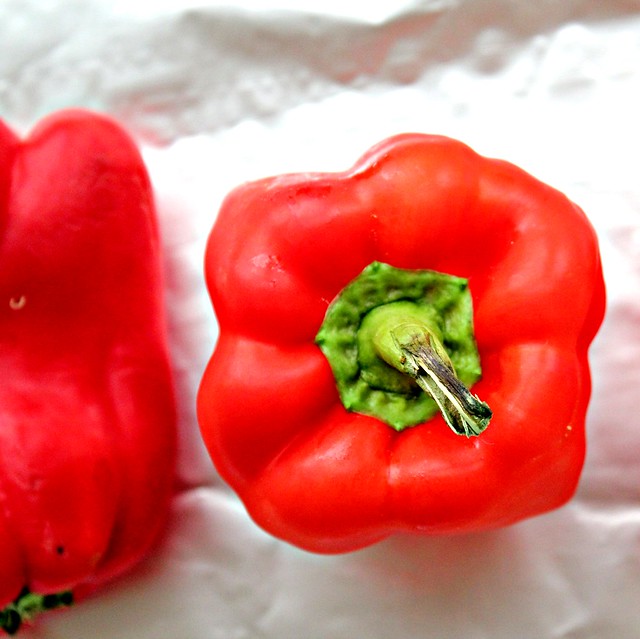 This salad is, in fact, red, white, and green, but I’m certain it would still make a great addition to your 4th of July menu (or to any barbecue menu) if you’re still searching for one.  It is chock full of summer veggies and exudes fresh summer flavor.  Ideal, no matter what part of the color spectrum it falls on.

1. Toast the pine nuts in a small, dry skillet over medium heat, shaking the pan occasionally, until lightly browned.  Remove from the pan.

2. Turn on the broiler.  The heat should be medium-high and the rack about 4 inches from the fire.  Brush the zucchini with the 1 tbsp oil, sprinkle with salt and pepper, and broil, turning as needed, until lightly charred on both sides and beginning to soften, 5 minutes or more.  When they’re cool enough to handle, cut the zucchini into chunks or slices.

3. Toss together the zucchini, wheat berries, roasted red peppers, radishes, lettuce, and dill in a large salad bowl.  Add the vinegar and remaining oil.  Sprinkle with salt and pepper and toss again.  Taste and adjust the seasoning.  Toss with mozzarella. 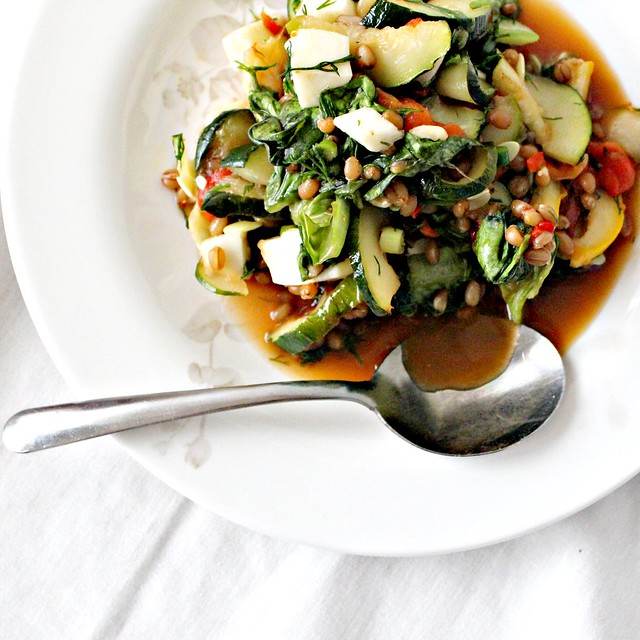 76 Responses to Wheat Berry Salad with Zucchini and Mozzarella…Happy 4th of July!