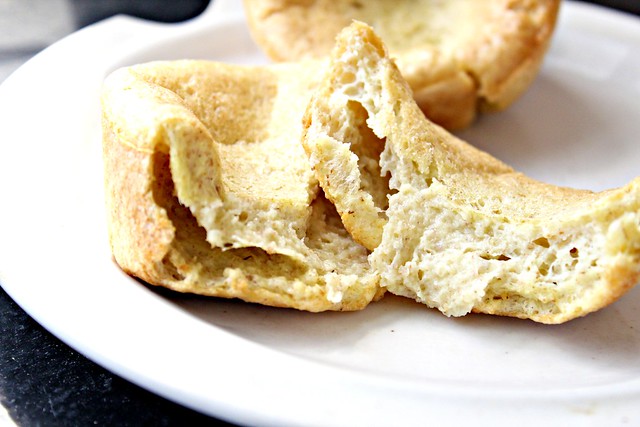 I’m not usually one to put the fate of my dinner in the hands of Rachel Ray, but as we made our way back down to the hotel lobby after dropping off our bags in our room, Cate said, “Let’s ask the concierge where to go.  That’s what Rach always says to do.”

And, well.  Given that I’ve been reading her blog every day without fail since before I even had one of my own and thus trust her implicitly with, not only my time but also what goes on my dinner table (the two most precious things in my life).  I agreed.

Plus it was late.  We were tired.  And sure, we could have headed into Boston or Cambridge, but local sounded good. 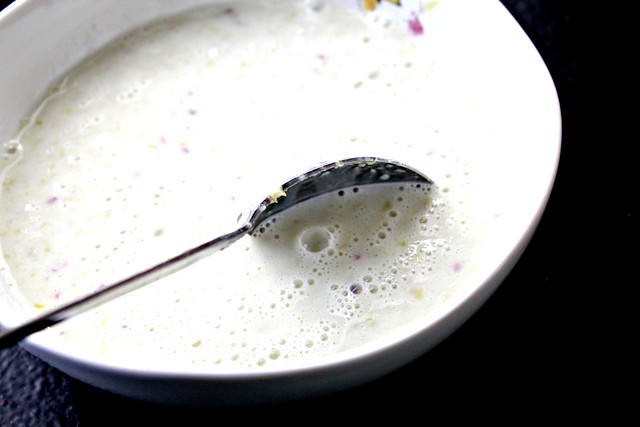 The concierge, a Middle Eastern-looking man who was quite incongruously named “Ike”, smiled at us agreeably and suggested, first, that we head to Union Square (Somerville, MA, not NYC) where I knew from personal experience that there were a few good places to eat, and then that there was a “great seafood place just a five minute walk away” (his words, not mine) and that he would gladly give us instructions on how to get there.

Being the diehard Eat.Live.Be-ers that we are, Cate, Patsy and I thought “walk=exercise” and so we decided to go with the latter.

Plus, seafood in Boston…you can’t really go wrong there.  Right? 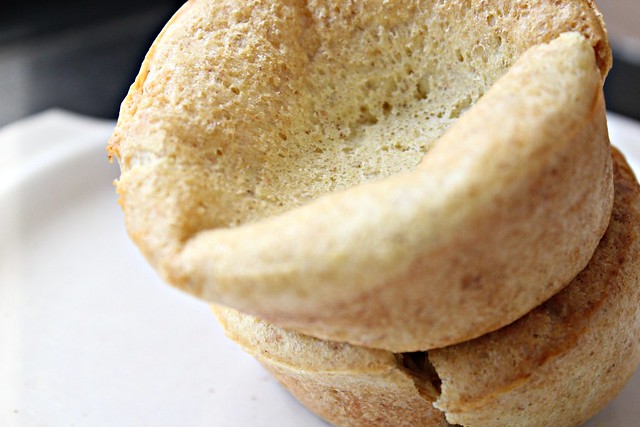 It was a bit of an epic journey.  There were hills.  A group of 40 year old bachelors who Cate was ready and willing to offer up my hand in marriage to, if need be.  Dark corners and abandoned alleyways.

But eventually, we made it.  Mount Vernon Restaurant.

As soon as we entered, we should have known that something was up.  First of all, the place was half empty.  Second of all, both the hostess/owner and our waitress looked like they were straight out of one of those diners you see in movies about the old west.  Townies who had really meant to make it to the big city, but had just gotten stuck in one of these places in a small town off the highway.  Lifers.

Except, we were in Somerville, MA.  (Which, granted, is not Boston or even Cambridge.  But is approximately ten minutes away from either of those places and should resemble a suburb and not middle-of-nowhere America.)

Anyway.  We suspended our doubts and disbelief long enough to allow the hostess to seat us, peruse a menu, and order. 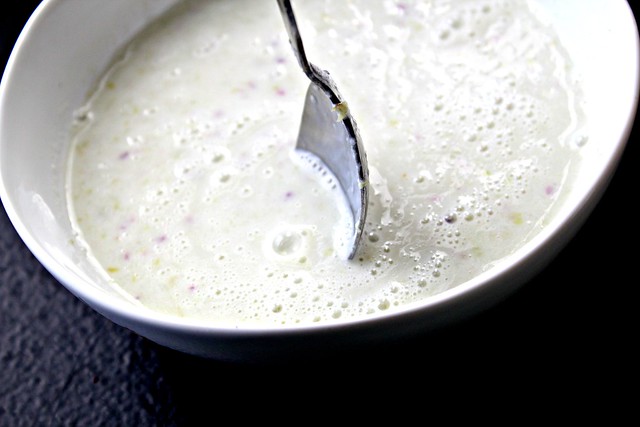 After ostensibly delivering our order to the “chef” (I wouldn’t call him that if my life depended on it), the waitress returned and asked us if we’d like popovers or Italian bread for the table.  And, well.  Given that there’s no way that Boston Italian bread can compare to the stuff you can get in NYC, we went with the “popovers”.

Now. I am no expert bread baker.  Nor had I ever had a popover in my life.  But I’ve made enough to know that it’s really hard to mess it up to the point that it’s completely inedible.  And yet…

Let’s just say that this was an inauspicious start to a disaster of a “meal”.  (Again…I wouldn’t call it that since what we were served was not food in any sense of the word.)

I’ll spare you the majority of the details, but let’s put it this way.  The best part of my lobster mac and cheese was the ritz topping.  Patsy tried exactly one of her baked stuffed shrimp before gagging uncontrollably.  And Cate was served a baked potato whose insides were the same shade of brown as its skin.  We left without eating any of it.  (And without paying for two of the meals.)

And, of course, being the big-mouthed New Yorker that I am (and seeing as how I do, even after years of fighting against it, take after my father who has never once held his tongue upon being served bad food). I let the hostess have a little piece of my mind.  It had nothing to do with her, and she was actually quite nice, but everyone in that kitchen needed to be guillotined on the spot.  And I let her know it.

Now you see why three food bloggers went to Boston and ended up eating granola bars for dinner.

The thing that gets to me most, though…is that cooking edible food isn’t rocket science.  It doesn’t need to be that hard.  All you need is a few good recipes.  Perhaps a copy of Irma Rombauer’s The Joy of Cooking (who is the woman on Gourmet’s list of gamechangers that we are celebrating this week), which is the one tome you will ever really need in the kitchen.  And you’re set.  In fact, I have two copies and I might donate one to our good friends over at Mount Vernon.  It will be my gift to the people of Somerville.

And perhaps I’ll send over a batch of these popovers as well.  Which, though they’re made from WHOLE GRAINS, are light and fluffy and have a certain air-like quality to them.  Not reminiscent of cardboard at all.  Exactly as good popovers should be.

—
As I mentioned before, this week we are cooking the recipes of Irma Rombauer and so I chose to make her white gazpacho to eat with my popovers.  Light, refreshing, and both sweet and tangy at the same time, this soup is perfect for the obscenely hot and humid weather we’ve been having (especially if you have cucumbers taking over your fridge.  Like some of us do.).
For more Irma Rombauer recipes, check out these blogs:
Val – More Than Burnt Toast
Taryn – Have Kitchen Will Feed
Susan – The Spice Garden
Claudia – A Seasonal Cook in Turkey
Heather – girlichef
Miranda – Mangoes and Chutney
Jeanette – Healthy Living
April – Abby Sweets
Katie – Making Michael Pollan Proud
Mary – One Perfect Bite
Kathleen –Bake Away with Me
Viola – The Life is Good Kitchen
Sue – The View from Great Island 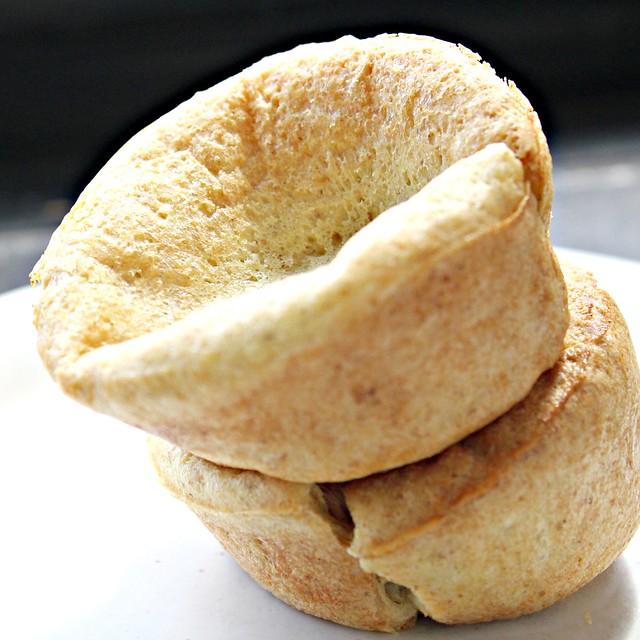 Whole Grain Popovers
Makes 20, adapted from Good to the Grain

For the multigrain flour mix:

White Gazpacho
Serves 4-6, adapted from The Joy of Cooking

I am submitting the whole grain popovers to Weekend Herb Blogging, which is being hosted this week by Simona of Briciole and the white gazapcho to Souper Sundays over at Kahakai Kitchen. 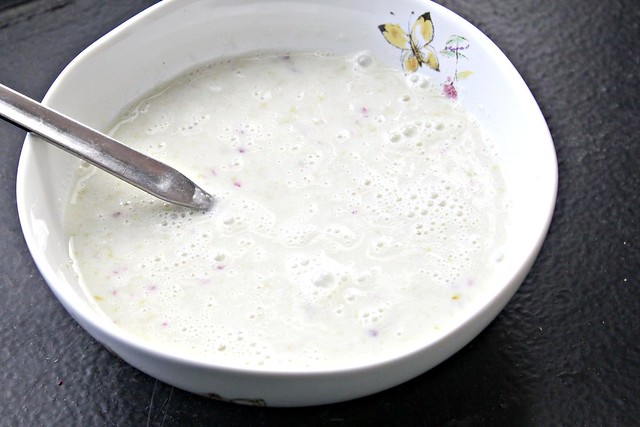