Sandwich of the Week #1 Broccoli and Cheese Calzone

Spaghetti with A Creamy Tomato and Sausage Sauce 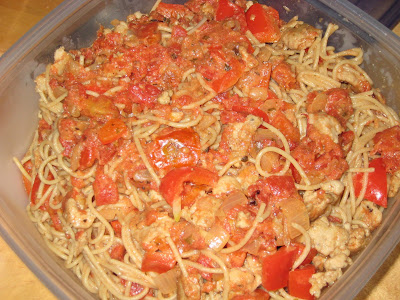 Coming from a 100% Italian background, pasta was always a staple in my house. It has become less so now that my mother has given up cooking, but throughout my entire childhood we had pasta with meat sauce at least once a week. I was craving something homemade this week and considered going for an alfredo-y sauce. Instead, since I had some canned diced tomatoes sitting 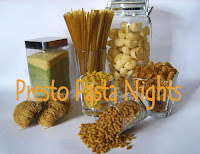 on my shelf, I decided to make a creamy tomato/red pepper sauce (don’t you just love tomato sauce infused with sweet red pepper flavor) with chicken sausage. Luckily for me, the local supermarket here in Boston (Shaw’s) sells sweet Italian chicken sausage. Now, maybe it’s just because I haven’t had pork sausage in a while, but I thought the flavoring in the chicken sausage was spot on (kind of like how vegetarians claim that tofurkey tastes like the real thing), allowing me to have the illusion of a rich pasta sauce without all the calories. I also made the sauce with half creamer and half almond milk to try to make it a bit lighter. It was a really good dish and may even be something that I dare to cook for my parents the next time I’m home. I am going to submit this dish to Presto Pasta Nights, which is being hosted by Erin of The Skinny Gourmet this week. Be sure to check back with her on Friday for the round-up!
As some may know, I spent the first few months of this year applying to MD/PhD programs. Basically what that means is that after graduating college, I will spend another 7-8 years in school working to obtain both my MD and a PhD. These programs are pretty tough to get into with each school only offering 10 positions per incoming class. I have known for a long time that I want to be a doctor, and then while in college I got really involved in research (I worked on calorie restriction and its effects on aging), so it seemed like a career that married the two would be the best for me. In early December I found out that I got into the Cornell/Rockefeller/Sloan-Kettering Program and so I was really psyched and ready to go there. A few days ago, I found out that I also got into NYU, which I am also amazingly glad about. However, now I have to make decisions about where I want to spend the next ten years. I really am happy, though, and am still in a state of shock about it all. It’s one of those things where you spend so much time thinking and worrying about it, that once it works out it’s just kind of hard to believe!
I hope everyone had a good weekend!
Spaghetti with Creamy Tomato and Sausage Sauce
Serves 4
1 box whole wheat spaghetti
3 links sweet Italian chicken sausage, casings removed
1 red bell pepper
2 (14 oz) cans diced tomatoes
1/2 cup half and half
1/2 cup almond milk
4 cloves garlic
3 shallots
2 tbsp olive oil
salt and pepper
1) Start boiling the water for the pasta and cook as directed.
2) Heat 2T of EVOO in a non-stick skillet. Add the garlic and the shallots and cook until fragrant, about 2-3 minutes. Add the chicken sausage, breaking it up into pieces and crumbling it with a spatula as it cooks.
3) Once the chicken sausage is browned, add the half and half and almond milk to the pan. Boil and then simmer for 5 minutes. Add the tomatoes, red pepper, and salt/pepper to taste. Bring to a boil and then simmer for fifteen minutes, stirring every so often.
4) Mix with the cooked pasta and then serve with parmesan cheese and some good bread to mop up the sauce.
You are reading this post on Eats Well With Others at https://joanne-eatswellwithothers.com. Excerpts and links may be used, provided that full and clear credit is given to the author and or owner of Eats Well With Others. All rights reserved by Joanne Bruno.

4 Responses to Spaghetti with A Creamy Tomato and Sausage Sauce