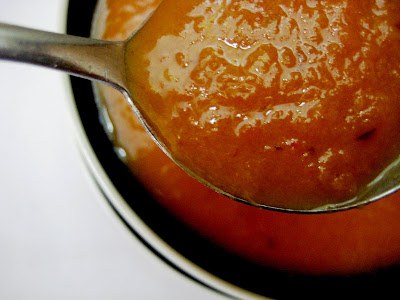 So my brother is leaving today for a week-long trip to Argentina.

(This is the point at which, if my parents were reading this, they would look at me in utter shock and amazement. I swear he told them at least twenty times that he was going. And each time he did. They reacted as if it were the first time they were hearing any of it. I had to actually sit them down at one point and explain to them that no matter how many times they tried to repress their memory of this event, it was still going to happen.

Just because you don’t remember something, it doesn’t mean it doesn’t exist. It just means you’re going senile.

They didn’t like that very much. But their ability to recall this little nugget of information vastly improved immediately after I said it.

Oh, THAT trip. Of COURSE we remember. Sure you do.)

Why is he going? Funny you should ask.

That being said. It’s a homework assignment. Of sorts.

You heard me right. His school is requiring him to go. It’s tough being in business school. It really is. 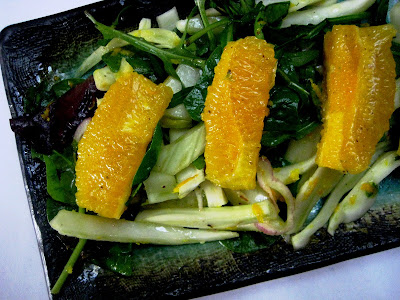 So today while I am stuck in a room with fifty cadavers. Being tested on (A) whether or not that tiny non-descript white vessel with a pin in it is the iliohypogastric or ilioinguinal nerve (or neither. That’s always an option. Especially given my current mental state. Which is to say. Confused.) and (B) which one of those can be accidentally cut during an appendectomy because it lies on McBurney’s point, which is 1/3 of the way between the anterior superior iliac spine (ASIS) and the umbilicus. (God I am such a wealth of useless information. How do you stand me?)

He will be on his way to paradise. 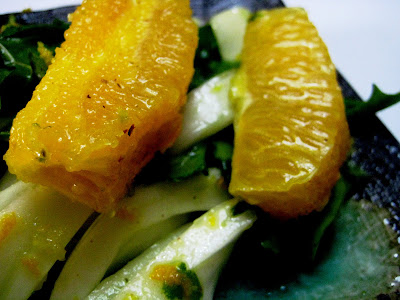 This has nothing to do with these recipes. At all. I just felt like venting. Glad I got that out of my system.

So this week’s Symon Sundays assignment was to make the shaved fennel salad and the tomato soup. I have to say. I didn’t love the salad. Apparently. I don’t like raw fennel. Which I felt really bad about. Until I saw an episode of the Barefoot Contessa in which Ina Garten said she didn’t like raw fennel either. And if Ina doesn’t like it, it’s totally acceptable if I don’t. The woman is a culinary goddess after all.

But if you do like raw fennel then go for it. Because everything else about it. Was incredibly tasty.

Directions
In a medium bowl, whisk together the garlic, shallot, salt, lemon zest and juice, and the orange zest and juice. Fold in the shaved fennel, fennel fronds and dill. Toss to coat. Add the orange segments, a few grindings of black pepper, coriander, olive oil and watercress. Toss gently and plate ingredients, spoon additional dressing over each portion. 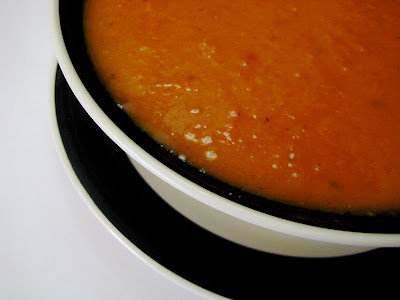 And then we have this soup. Now. It’s a commonly known fact that I’m not really a soup person.

But this wasn’t soup. This was heaven. In a bowl.

I ate it hot. And I ate it cold. Sometimes both. In one day. Yeah it was that good.

It tasted almost like a pink pasta sauce with a blue cheese/sriracha twang to it. And with that being said. I would consider pouring it over pasta. If I weren’t pretty sure that I would just end up sipping it from the pot with a straw.

Spicy Tomato and Blue Cheese Soup
Serves 4 so long as no one grabs the pot and drinks it straight…not that I know anyone like that, adapted from Live To Cook

Directions
1. Heat the olive oil in a 4-quart pot over medium heat. When the oil is hot, add the onion and a three-fingered pinch of salt and sweat the onions for 2 minutes.

2. Add the garlic and continue to sweat for 2 more minutes. Add the tomatoes, their juice, and the stock and bring to a simmer. Add the cream, sriracha sauce, and oregano and simmer for 45 minutes.

3. Pour the tomato soup into a blender, add the blue cheese, and blend until smooth, working in batches if needed. Strain the soup through a fine-mesh strainer into a clean pot, taste, adjust the seasoning if necessary, and reheat to serve.

4. The tomato soup will keep, covered in the refrigerator, for a few days.

Check out Ashlee’s blog on Monday for the Symon Sundays round up!

I am submitting this soup to both Souper Sundays over at Kahakai Kitchen and the Side Dish Showdown at Cinnamon Spice and Everything Nice!

Remember to send in your submisisons to Regional Recipes: Irelandby the 31st and BSI: Carrots by Sunday (I am going to post the round-up Sunday morning due to scheduling issues, but you can send in your entries until Sunday night at midnight and I will add them as they come). Email: [email protected]

Thanks to everyone who has submitted already!