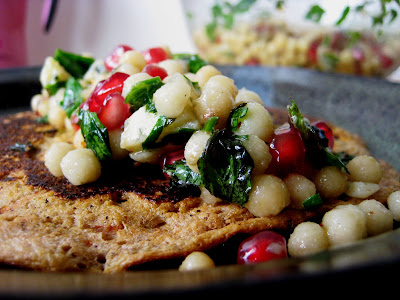 When a cab driver asks you about your boyfriend, there is a narrow window of time in which you can answer before he starts to make assumptions.

If you answer quickly enough (in the affirmative. Always the affirmative. Even if you’ve been single for years. You know that coffee mug that you use compulsively every morning? It’s name is now Trevor. And it is dependable, lovable, and quite the perfect companion in every way.) he will usually leave you alone for the rest of the trip. And you’ve just saved yourself an entire cab ride of wondering at what point you should just jump out of the moving vehicle because man he has gotten creepy. 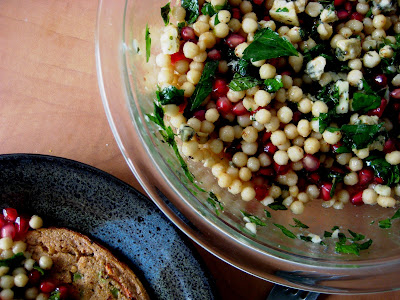 The second you pause, however. He knows the truth. And then, well. All bets are off.

Earlier this week I took a cab to Queens to visit my parents. The cab driver, as per usual, was being kind of sketchy. At every red light, he would turn around and leer at me. Smiling.

I, in return, attempted to look very busy with my phone. Who knew that text messaging yourself could be so riveting! Which is probably why when he asked the magic question, “So how’s your boyfriend?” I paused.

At this point, I’m looking out the window at the traffic behind us. Trying to determine, if I did have to jump, what the likelihood of me dying would be. Calculating the force with which I would hit the pavement and whether or not that would be enough to break a bone or, worse, my skull. So if F=ma and we are moving at a speed of 60 miles per hour and I weigh 52 kg then

Only to be interrupted by his next question. Which was, “What about me, I could be your boyfriend.” 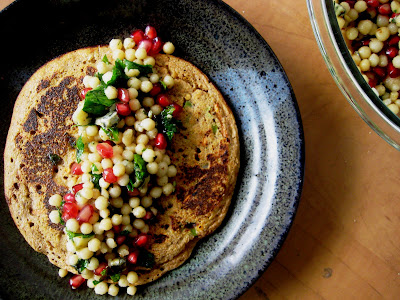 All I wanted was to do something nice and surprise my parents and in return I am going to die. Great.

What to do. I smiled. Nervously. Laughed. Nervously. Tried to brush the whole thing off. I mean he was old. He couldn’t be serious. Right? (At least that’s what I told myself.)

(Note to all of you cab drivers out there. I don’t know if you think you’re funny. Or if you’re just trying to make conversation and don’t know what else to say. But don’t hit on the girls who ride in your cars. It is NOT okay. And it makes us uncomfortable. Because we, as passengers, are essentially powerless.) 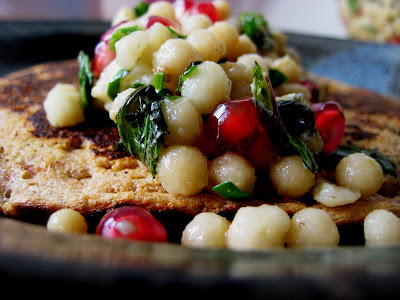 I was really working myself into a tither. But then I remembered something.

I had pomegranate seeds for lunch. And do you know what pomegranates are?

And what is the point of a superfood if not to confer super POWERS onto whoever eats it? Then and there I decided. If he tried anything. I would whip his ass.

Needless to say, I got to my final destination in one piece. (Pun not intended). Not without him asking for my number, of course. So if you get a phone call from a guy named Innocent (seriously. That was his name.) looking for a girl who rode in his cab on Tuesday. I am deeply sorry. But I had to do it.

Which brings us back to the moral of the story. Unless your cab is being driven Justin Timberlake or Brad Pitt. Have a boyfriend ready for fabrication. Because you’ll regret it if you don’t. 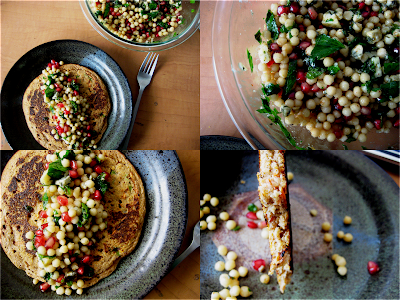 In all seriousness. I loved this meal. The red lentil pancakes were just the right amount of spicy and were chock full of flavor. They were my first experience with savory pancakes. And will not be my last.

I paired them with a pomegranate couscous salad that I saw on Closet Cooking a while back. The original calls for pistachios, which I promptly replaced with blue cheese. Mainly because I had some in my fridge that was threatening to bite the dust at any moment. The cheese did well to cool off the spiciness of the pancake and also complemented nicely the tang of the pomegranate molasses vinaigrette (AMAZING!). Which may just be my new favorite salad dressing of all time.

Spiced Red Lentil Pancakes
Serves 4, adapted from Bittman’s How To Cook Everything Vegetarian

1. Put the lentils in a food processor and add about 3/4 cup water. Puree until a smooth and thick batter is formed. Transfer to a bowl and stir in the eggs, garlic, chile, scallion, carrot, salt, pepper, ginger, and garam masala.

2. Heat a large nonstick skillet over medium-high heat. Spray with cooking spray. Ladle in the batter to form several smaller pancakes or one large one (I made four SUPER large pancakes). Turn the heat down to medium and cook until the bottom is browned, about 2 1/2 minutes. Flip and cook for another 2 1/2 minutes.

1. Boil some water and cook couscous in it as you would pasta.

2. Make the vinaigrette by mixing together the olive oil through salt and pepper. Make the dressing saltier than you think you want it to be because the flavor is going to get dulled down when you mix it with the couscous.

The red lentil pancakes are my submission to this week’s I Heart Cooking Club, the theme of which is Caravan of Spice.

The Pomegranate and Blue Cheese Couscous Salad is my submission to Presto Pasta Nights, which is being hosted by Katie of Thyme for Cooking.

Last call for entries to Regional Recipes: Haiti! (I know it was a hard country…next month will be easier I swear! But thanks to all who have participated so far!) 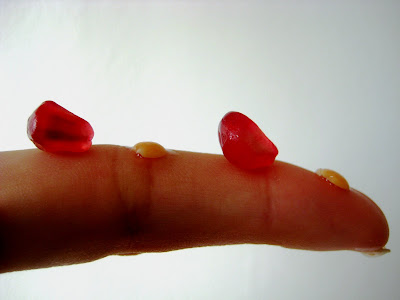