Eggplant and Tofu in Spicy Garlic Sauce Over Pasta 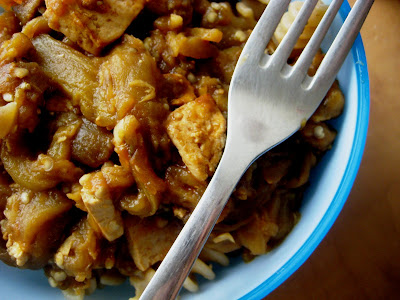 Not so recently anymore, I got into a conversation with one of my guy friends about where I go to the gym. He, being a native Upper East Sider all his life exclaimed, “Oh yeah. That’s a great place to meet people. Lots of singles.”

Interesting. Because I haven’t had. Quite. That. Experience.

Aside, of course, from the personal trainer who offered to help me perfect my squats (for the record – bad pick-up line guys. Really bad.).

To whom my response was. Thanks. But no thanks. 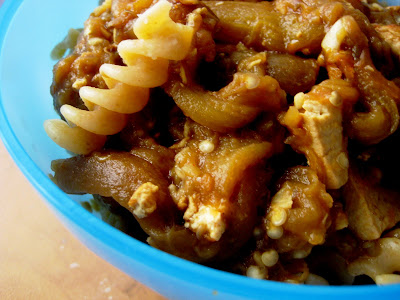 I couldn’t figure out what it was. So I spent a lot of time ruminating on the subject. (Instead of studying the three parts of the broad ligament of the uterus. I thought it was a much better use of my time.)

Maybe it’s me. Maybe I’m just not pick-up-at-the-gym material. Maybe I give off F*** you vibes. (I’m actually pretty sure that’s part of it. But I blame that on living in New York. It’s a survival mechanism.) 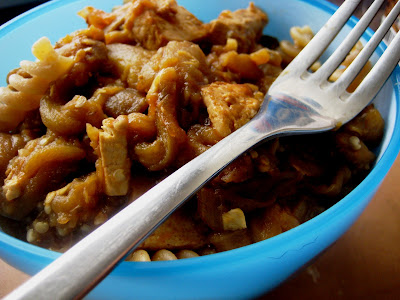 So I told that to my friend. He didn’t seem to think it was likely. Where there’s a will, there’s a way. Or something like that.

He seemed to think it might have something to do with the fact that I bring my anatomy notes with me and study them while on the elliptical.

It doesn’t help that right now. These notes consist of a study sheet on the congenital malformations of the vagina. And an in-depth analysis of the process of sperm maturation.

What is someone supposed to say to that? Hey baby. That’s a really nice picture of the perineal body you’ve got there.

Yeah. If I were a guy. I would probably run. Away. Screaming.

So I guess he has a point. 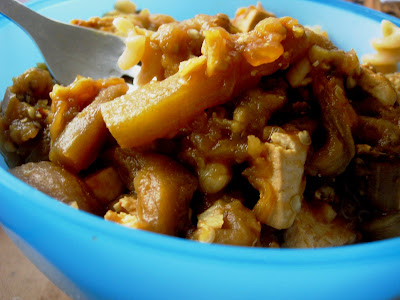 It probably also doesn’t help that when I’m not studying anatomy. I tend to be watching really bad television. The Real World. Sixteen and Pregnant. The Tyra Show.

Which isn’t my fault, really. This is what I’ve been reduced to since the powers that be decided to replace the Food Network with Bloomberg TV. (Stocks versus Paula Deen. No brainer. Apparently someone out there is missing a large part of their frontal lobe.)

My new favorite guilty pleasure is the new Jessica Simpson show, called The Price of Beauty. Basically Jessica goes around the world looking at what defines beauty in different countries. And, as one would expect, always concludes that while physical beauty is nice. It’s what’s inside that really counts. (Let’s all give a collective Awwwwwwww.)

Cheesy. But true. Case in point.

This pasta. It’s brown. Kind of monochrome. Not so very appealing.

But let me tell you. Looks. Can be deceiving. Because one bite of this. And you will be hit with flavor. Lots of it.

I mean. It has eight cloves of garlic in it. (And yet again, I wonder why no one comes near me at the gym.) How could you go wrong there? 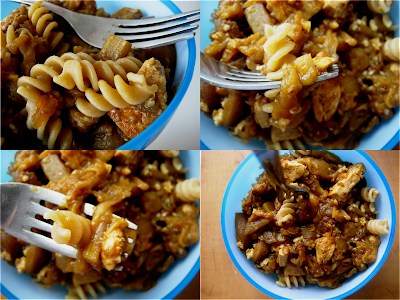 Cut the tofu into 1/2-inch slices and press them lightly between towels to get some of the moisture out. Combine the 3 tbsp. soy sauce with the 2 tbsp. water and 1/2 tsp. sesame oil. Dip each slice of tofu into the mixture and set on a plate.

Set up a pot of water for the pasta. When boiling, cook the pasta per the package’s instructions. In the meantime.

Heat an oiled, non-stick skillet until hot. Place the tofu slices in the skillet and cook until browned. Turn over and brown the other sides. When the tofu is completely browned on both sides, remove it from the skillet and place it on a cutting board. Cut each slice into 8-10 cubes. Set aside.

Heat an oiled, non-stick wok and add the eggplant and 1/3 cup water. Cover and cook, stirring often, until eggplant begins to brown. Uncover and add the garlic and ginger and cook for 2 more minutes.

Add all remaining ingredients except the tomato, sesame seeds, and tofu. Simmer uncovered until all the eggplant slices are completely cooked–they will be very soft and start to fall apart. Add the tofu cubes and tomato and cook until heated through.

Dish the pasta out into four bowls. Cover it with the eggplant/tofu mixture.

NOTE – If you don’t like tofu. Which I know some of you out there don’t (ahem, Dave). I think this would be excellent with chicken. Or pork. But I would marinate it overnight in the soy sauce/sesame oil mixture rather than just for a few seconds.

This is my submission to this week’s Presto Pasta Nights which is being hosted by Ruth over at Once Upon A Feast! 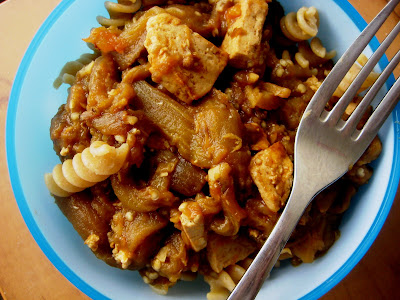