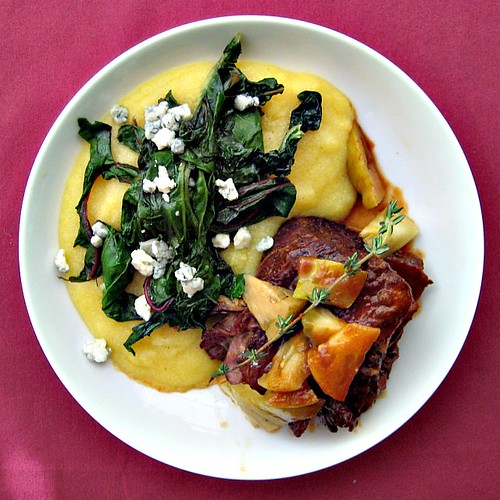 I was going to call this post The Dish That Got Me Through A Five Mile Race at an 8:40 Pace Plus an Extra 5 Miles Thrown In At the End Because I Am a Crazy Person.  (Because you can rest assured that it was the thought of being able to eat this fabulously marbled short rib without any trace of guilt at all whatsoever that got me through the cumulative ten miles.)

But (a).  That seemed little long.  Although now that I look at the title I did use.  Well. I’m not really known for my brevity, now am I. 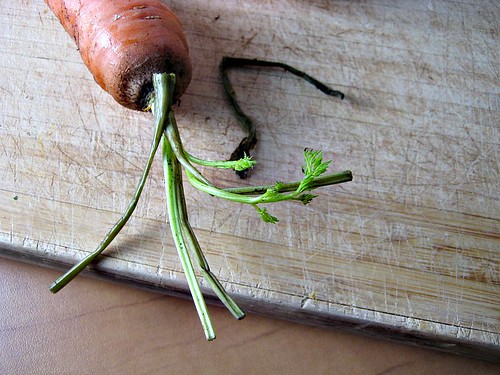 And (b).  What happens when you don’t read the instructions for a recipe before you make it (especially if it is a Michael Symon recipe) is that more often than not it actually takes three days to make rather than the two days you had planned.  (Word to the wise.  If you are cooking a Michael Symon recipe…always assume it takes at least two days.  And read ahead.  Do as I say, not as I do.) 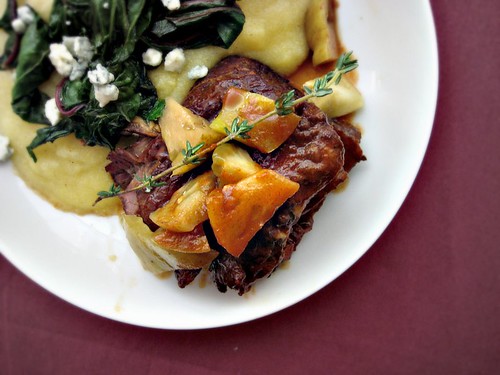 And so you just might get home after your ten mile run.  About a thousand calories in the red.

Set to cooking.  At 10 AM.  (Otherwise known as short rib time.  Kind of like high tea. Symon style.)

And think.  Hmm.  Maybe I should actually read the recipe before making it.

Read, read read.  Get to the point where Mr. Symon tells you to refrigerate the short ribs in their sauce overnight so that you can skim the fat off the top the next day.

Throw your copy of Live To Cook across the room.  Because, really?  This?  Coming from the man who lives off of pork belly?  Wants you to skim the fat?  What?  Where are we?  What century is it?  Huh? 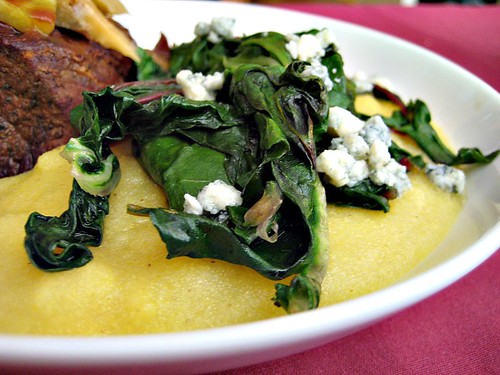 And then do what any normal person would do, which is have a large bowl of ice cream.  (After all, now that you find out that this short rib recipe actually is guilt free, you need to fill that 1,000 calorie void somehow.)

Savor every second of the dopamine high.  And then set to making the short ribs.  Ultimately deciding not to title your post “The Dish That Got Me Through The Day After A Five Mile Race at an 8:40 Pace Plus an Extra 5 Miles Thrown In At the End Because I Am a Crazy Person”.  Because really.  That would just be excessive. 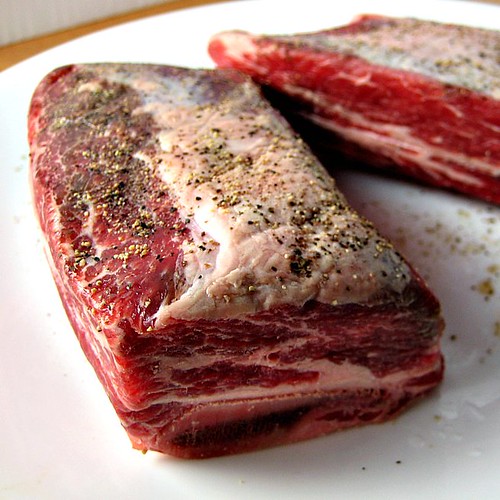 This was actually my first time both cooking and eating short ribs and let me tell you, these did not fail to please.  The short ribs themselves, due to the long braising time at low heat, basically melt in your mouth and the tang of the pickled green tomatoes does a good job of evening out the fattiness of the ribs.  I chose to serve these with polenta, topped with some swiss chard and blue cheese, because there are few things in life that go better with polenta than rich, slow-cooked meats.  And even fewer things in life that go better with a red wine-based sauce than blue cheese.

2. Cut the tomatoes into wedges.  Place them in two 1-quart jars, cover them with warm liquid, and screw on the lids.  Refrigerate for up to 1 month.

Note – I made two short ribs and all of the sauce.  I definitely had extra sauce but enough short ribs for two servings.  I’m going to provide the whole recipe, however.

1. The day before cooking, season short ribs with salt and pepper and refrigerate.

2. Preheat the oven to 325.  Remove ribs from the fridge about a half hour before you want to cook them.

3. Heat 1 tbsp olive oil in a large pan (or a large enameled cast-iron Dutch oven if you have one.  I don’t.) over medium-high heat.  Add half of the short ribs to the pan and cook on all sides until browned, a few minutes for each side.  Transfer the ribs to a plate.  Repeat with remaining ribs, adding oil as necessary.

6. Love the oven temperature to 225 (or to 300 if that’s as low as your oven will go…) and cook for 4 hours or until the meat is very tender (mine took 2 1/2 hours but that’s probably because my oven was too high).  Remove the ribs to a large bowl and strain the liquid into the bowl.  Discard the solids.  Refrigerate ovenight.

7. To serve, skim the congealed fat off the liquid and reheat the ribs in the liquid.  Remove the ribs to a serving platter and cover to keep warm while you simmer the liquid to reduce it by half.  Pour the sauce over the ribs and top them with the pickled tomatoes.

1. Heat the olive oil in a large skillet over medium heat.  Add the garlic and cook, stirring, for 2-3 minutes or until lightly brown.  Add in the chard, 1/2 tsp salt, and 1/4 tsp black pepper.  Cook, tossing occasionally, until the chard is tender, about 5 minutes.

2. In the meantime, bring 4 cups water to a boil.  Add 1 tbsp salt.  Slowly pour the polenta into the boiling water, whisking it in as you go.  Keep whisking until it thickens.  If using instant, this should take 3-4 minutes. If not, then cook as per package instructions…usually you can bring it to the bubbling point and then stir it every so often for about an hour.

3. Divide the polenta among the bowls.  Top with chard and blue cheese.

I am submitting this to Symon Sundays, hosted by Ashlee at Veggie By Season and also to the Hearth and Soul BlogHop! 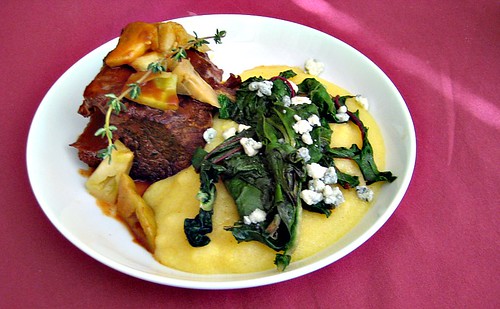