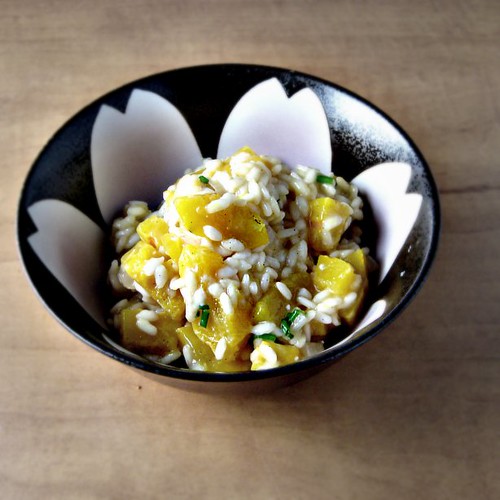 This is not dessert.

I know, I know.  You read vanilla, you instantly think creme brulee.

And so even though the ingredient list calls for chives.  And parmesan cheese.

You are still pretty sure that this will end up with a caramelized sugar crust on top.  Somehow. 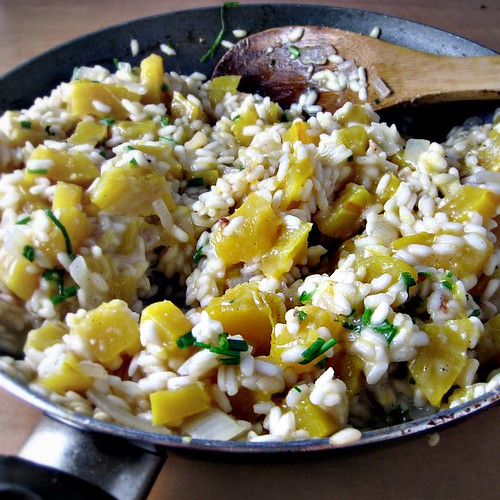 Let me tell you something else.

It’s the holiday season, people.  (Officially.  Because I said so.)  You are going to have false advertising thrown at you left and right.  And so you need to learn how to be skeptics.  Build up that tough outer shell that I know you have somewhere under that candy-coated crust and milk chocolate center.  Become a peanut M&M, I say!

Oh my.  All of that homemade caramel has gotten to my head.

Oops.  You didn’t read that. Until after Thanksgiving.  Right?  Right. 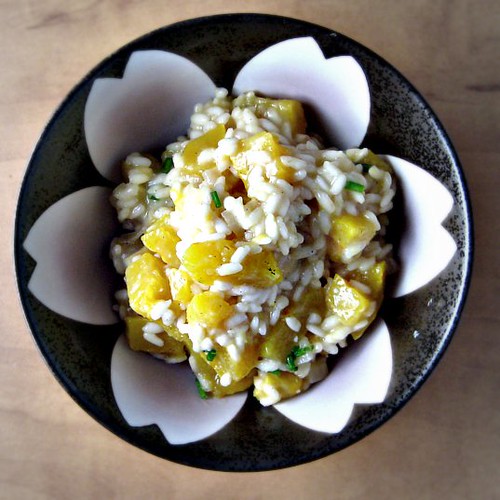 Aaah.  Got you again!

That, my friends was a shameless ploy at keeping you hanging.  Getting you hooked.  And then leading you on.  I could totally have been a twenty-something year old guy in a former life.  Seriously.

(Although there will be homemade caramel coming.  Soon.  If I don’t eat it all before Thanksgiving.  Which will be quite an accomplishment, if I do say so myself.)

Until then.  There is risotto.  Which still, after all of this, does not taste like creme brulee.  But does taste delicious.

It sounds weird, I know.  Vanilla?  Savory?  What?  But if you’re a vanilla fiend such as myself, or even if you’re not.  I feel pretty confident in saying that you will love this.  You’ll be confused at first.  You’ll bite into it and won’t be quite sure what to think.  But keep going.  Don’t give up!  Reach for the stars!  Because by the end, you’ll find that you can’t stop eating it.  Even though you don’t quite know why.

But don’t just take my word for it.  Be skeptical.

It’s the holiday season, after all. 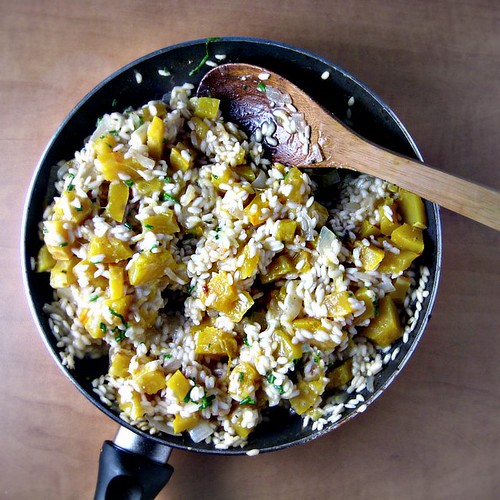 Butternut Squash and Vanilla Risotto
Serves 4 as a main, 6 as a side, adapted from Giada’s Kitchen

1. Put the vegetable broth into a medium saucepan and warm over medium-high heat.  Cut the vanilla bean in half.  Scrape out the seeds and add them to the broth.  Add in the vanilla bean itself.  Simmer, then reduce heat to low.

2. Add the squash to the broth and simmer until it is fork-tender, about 5 minutes.  Using a slotted spoon, remove the squash chunks to a dish.  Turn the heat on the broth to low and cover to keep warm.

3. In a large heavy saucepan, heat the 1/2 tbsp olive oil.  Add in the onion and cook until tender, about 3 minutes.  Add in the rice and cook until coated with oil, about one minute. Add in the white wine and simmer, continuously stirring, until all of the wine has evaporated.  Then, in 1/2 cup-ish increments, add the broth to the rice, only adding more when the previous batch has almost entirely evaporated.  Stir.  Stir.  Stir.

4. When the rice is tender but still firm to the bite, and creamy, turn off the heat.  Mix in the squash and parmesan cheese.  Add salt to taste.  Add chives.

I am submitting this to this week’s IHCC, the theme of which is POTLUCK!  And also to the Hearth and Soul Bloghop! 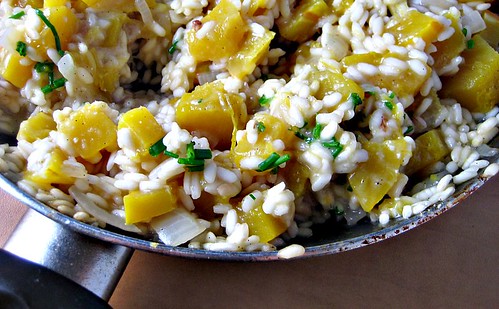