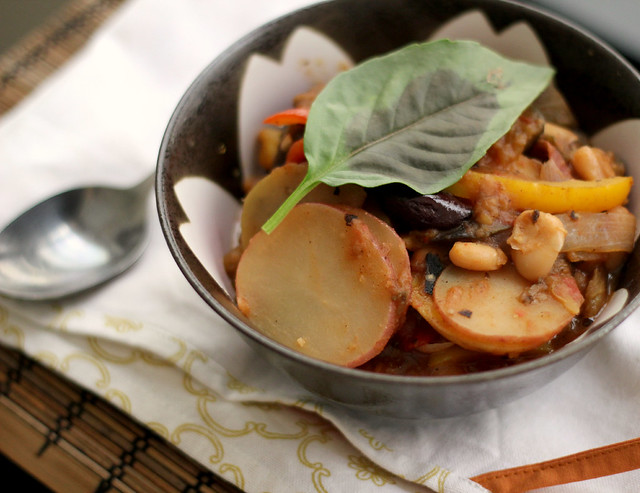 If you don’t have something nice to say you really shouldn’t say it at all, but if I abode by that life rule, my roommate and I would have nothing to gossip about between the hours of 10 and midnight every night and, well, all of you who are expecting a recap of the Carnival cruise I went on this past weekend would be sorely disappointed when the only purely apathetic point I could muster on the subject was “I went.”

So instead you’re going to get outrage and disgust.  Lucky you. 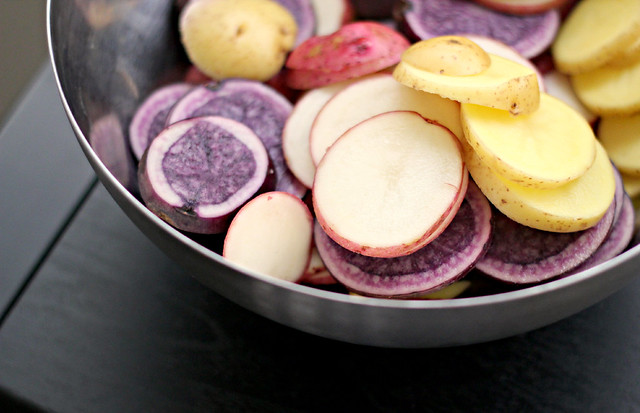 (Before we kick off this roast of epic proportions, I feel compelled to remind everyone that I did not go on this cruise by choice.  Every year as per our Medical Scientist Training Program grant stipulations, our MD/PhD program must go on a retreat.  Think of it part weekend away, part bonding experience, and part science conference.  People present on the work they’re doing in their PhD’s, there’s a poster session, and alcohol abounds.  Generally these are a day and a half long, a weekend at most, and take place in Tarrytown, New York.  Until the summer of 2010, that is, when our program’s administrator discovered it was actually cheaper to go on a Carnival cruise for five days than for us to trek it to almost-upstate New York for a day and a half.  So now we’re switching off between the two.)

Let’s start off on a happy note, shall we?  Possibly the only mildly okay thing about the trip was our room.  My roommate and I roomed together on the boat and after having to endure living in a circadian rhythm-disrupting, constantly pitch black room with no windows last year (if you want to induce seasonal affective disorder early, this is the way to do it), decided to upgrade this year to a room with a balcony.  There was sunlight and a couch and room to actually walk from one end of the cabin to the other.  Worth every extra penny.

That, and the science talks given by my classmates (and then being able to gossip about them with Anu afterwards) were definitely the highlights of the trip.

Which brings us to everything else.  Ugh.

Let’s start with the food, shall we?  I actually don’t think I’ve ever encountered anything more inedible in my life.  And I know you’re thinking, well Joanne, you’re kind of a food snob…but my darling roommate who happily eats pizza and Chipotle and Chinese take-out every day couldn’t eat it either.  I really can’t even explain why it was so awful other than that everything was either deep fried, dripping in some kind of low quality oil for no apparent reason, or covered in about 2 inches of American cheese.  Now I like American cheese in some very appropriate instances, like on grilled cheese or in mac and cheese.  But on a fajita wrap?  Or layered on top of polenta?  Not so much.  The vegetables were also all really wet.  And had this strange musty taste to them.  So Anu and I didn’t eat for four days.  We tried, we really did.  But after approximately three bites of everything, it was either forge ahead and hurl or go to bed hungry.  And, um. We chose the latter.

Then there was the “coffee”.  I’m pretty sure that actually they just took 1/4 cup of dirt, swirled it around in a pot of hot water and added some brown food coloring for good measure.  At least that’s what it tasted like to me.  So not only was I starving, but I also had a caffeine headache the entire time.  FUN. Definitely.  If you think I didn’t spend our entire day in St. John (New Brunswick) in Starbucks with an americano being IV dripped into my veins…you’d be wrong.  Very wrong.

Did I also mention that this boat also entered a time warp as soon as it set sail such that there was no Wifi, 3G, 4G OR cell phone service on board?  Well, they claimed there was Wifi, actually (at a totally reasonable cost of $94 for 240 minutes!!!) but I have yet to encounter anyone who actually got it to work.  So…so much for that. 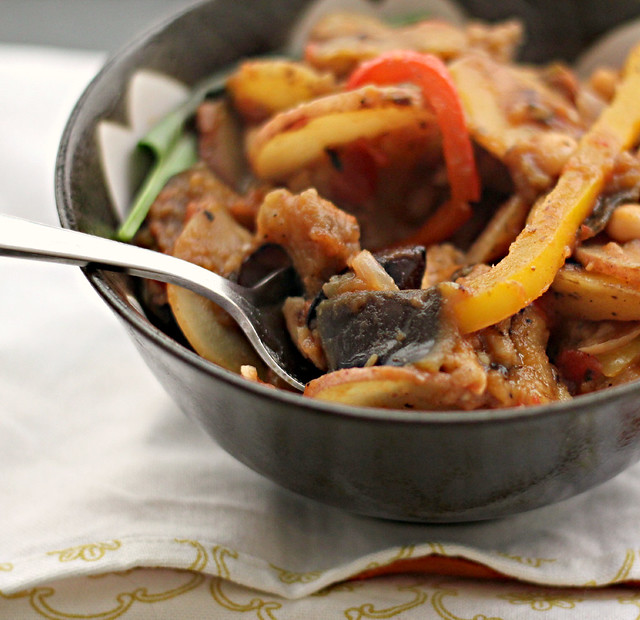 I could probably go on endlessly about how tacky all of the decor and entertainment was.  How frustrating it was for me (a mostly non-drinker) that everyone’s plan of action for the night, all four nights, was to end up drunk in the boat’s only dance “club”.  But I won’t.  No one likes a Debbie Downer, even if she comes bearing food.

So to sum up…I just didn’t have fun.  Which is kind of the opposite of the point of going on a cruise.  It was a waste of a perfectly good weekend.  And I almost cried of happiness when I got home.

Anu and I booked it off that boat as early as possible (seriously, I’m pretty sure we were the third people to disembark), cabbed it home and brewed ourselves the largest most delicious cup of coffee.  Ever.  It was glorious.

Then I headed to the grocery store.  Because if there was one thing I couldn’t live without for a second longer, it was food.  And vegetables.  Many vegetables.  None of which were covered in any amount of weirdo slime.  Win.

This stew was really the perfect welcome home dish because not only was it rife with the fresh flavors of summer but it was hearty enough to make up for the fact that I’d barely eaten for four days.  And to fuel some serious brainstorming as to why I’m going to be inexcusably busy this week two years from now when someone tries to coerce me into going on the cruise again.  It’ll be my parents’ 32nd anniversary? My 27th half birthday?  Hmm. I’ll work on it.

Speaking of groceries….those living on the Upper East Side, did you know that TOMORROW a new Whole Foods location is opening up on 57th and 2nd???  I got to go on a pre-opening tour of the store yesterday and let me tell you,k it is going to be gorgeous.  Just gorgeous.

The official opening “bread breaking ceremony” will take place on Thursday morning at 8:30 if anyone wants to attend! Not only will Whole Foods be celebrating their opening but they will also be donating 57 salad bars to schools throughout the five boroughs.  This donation will be made in partnership with the Mayor’s Fund to Advance New York City and Whole Kids Foundation, a Whole Foods Market foundation dedicated to improving childhood nutrition through increased access to healthy foods.  In addition, even if you can’t make it to the opening ceremony itself, 5% of the total sales from opening day will also go to the school salad bar donation so stop by, spend some money and check out the new digs. I know I will! 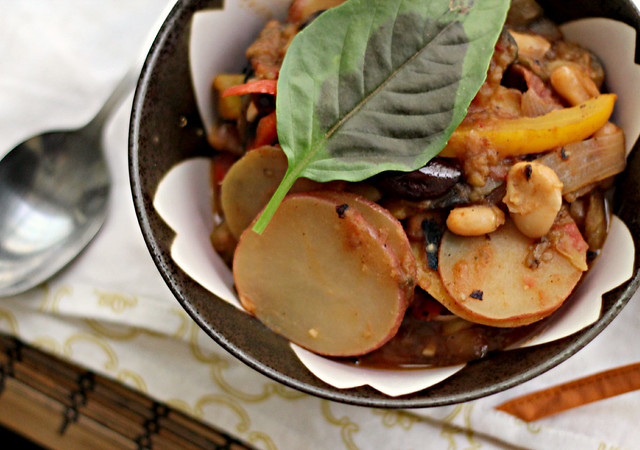 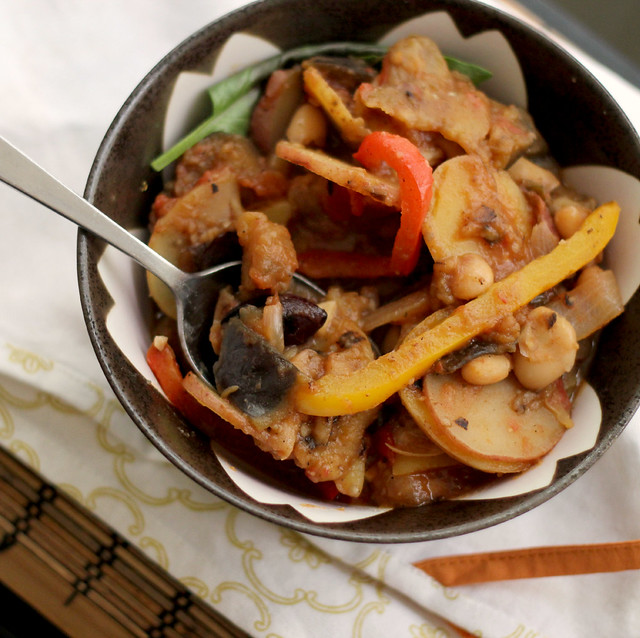 72 Responses to Summer Potatoes Stewed with Eggplant, Peppers and Olives