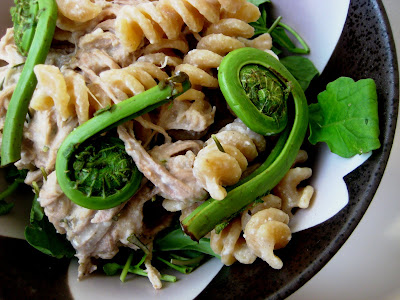 So when I tell you that, upon discovering fiddlehead ferns at my local Whole Foods, I bought them. Went home.

And promptly took 44 pictures of them. 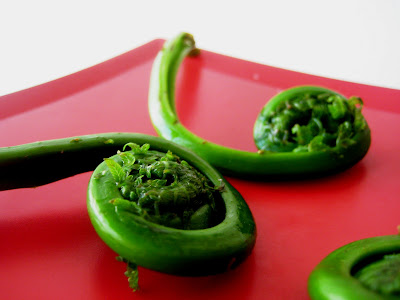 Speaking of which. The New York times wrote an article about people like us recently.

(And by “us” I mean food bloggers. Not 23-year-old females who have cookbook collections that outnumber that of their shoes. Or people who own at least eight jars of peanut butter. Or have six jars of dried beans sitting on their windowsill. Next to the package of dried kaffir lime leaves. That they walked three miles to buy. Or any other demographic that I may or may not fall into.)

They called it First Camera, Then Fork.

Hmmm. Yeah. That sounds about right. 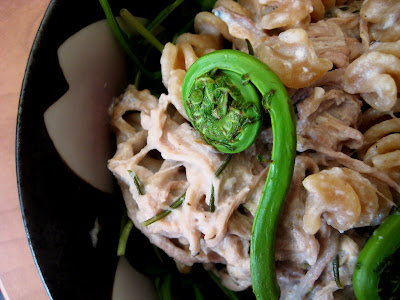 The article focuses mainly on bloggers whose contributions to our little community are more reminiscent of a food diary than anything else. You know the type. They take pictures of every meal. Every morsel. Every crumb. Religiously. (Or fanatically, as the Times argues. But we’ll get to that.)

And really. More power to them. If I took pictures of everything I ate. You would soon realize just how boring my life really is. And. Really. We can’t have that now, can we? No. I must absolutely keep up the illusion that I am the ringleader in this circus that I have created for you. Peanut gallery, bearded women, trapeze artists, and tightrope walkers abound! (Although. On the streets of New York. Any and all of these things may be encountered. So it’s all slightly more realistic than one might suppose. If I lived in, say, Iowa.) 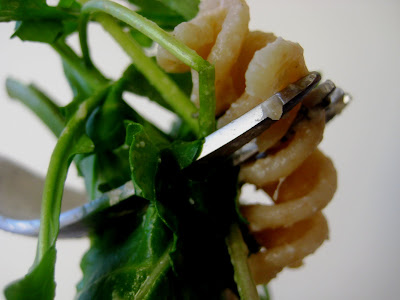 Mentality. Now that’s an interesting word. Because it implies some kind of psychology behind this food blogging phenomenon.

In fact. The New York Times goes so far as to call it. Pathological. Obsessive. Compulsive.

And yes. Maybe that is, to some degree, true. I would venture to guess that we all inconvenience ourselves or our families to some degree in order to get, what we in the biz call “the money shot”. Some of us now cook dinner at lunchtime. Because all of the natural light that floods through our south-facing windows will be gone by the time 7pm rolls around.

We wake up early on Saturdays. To walk down to the Union Square Farmer’s Market so that we have even a modicum of a chance to snatch up some of those ramps before they have disappeared into the ether that is food-obsessed New York on a sunny Saturday morning in May.

But does all of this mean that we have some kind of modern day eating disorder? To be honest. I haven’t quite decided. On the one hand, you have to alter your life to some degree in order to accommodate any hobby. You have to make time to golf. Go out of your way to rescue 14th century stamps from collecting dust in a tiny antique store in a tiny town in Middle-Of-Nowhere, USA. Set aside an entire quarter of your room for all of the jars of peanut butter you’ve amassed.

But on the other. If not being able to do these things makes you anxious. Psychotic. Comatose. Then Houston. We may have a problem.

All food for thought. Something to think about while you sort through those 44 photos. Or in-between the hours of worry about what you should make for that blog event that requires you to concoct something out of ghost chili peppers, black sesame seeds, and green tomatoes.

Obsessive? Me? Not at all. 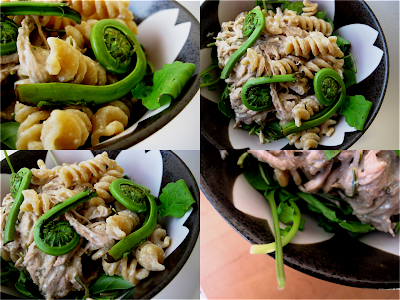 Michael Symon’s mac and cheese is one of the most decadent that you will ever encounter. It has you create a rosemary-infused goat cheese sauce that is just tart enough that it is not too rich but cloying enough that you won’t want to stop eating it. Possibly the only mac and cheese I’ve made that is impressive enough to serve to guests.

The original recipe called for shredded chicken, but I instead threw an oregano/lemon/garlic marinated pork tenderloin in the crockpot for 8 hours with 1/4 cup water and then shredded it. I also decided to amp it up with some steamed fiddleheads and arugula. After all. I’ve always got to have some green with my beige!

1. Bring a large pt of water to a boil. Add enough salt so that it tastes seasoned. While the water is coming to a boil, put the milk, rosemary, and 1/2 tsp salt in a large saucepan over high heat. Bring just to a simmer, then lower the heat to medium and simmer to reduce the mixture by half.

2. Set up a steamer to steam the fiddleheads. Do NOT eat raw – they may be poisonous. Steam to desired consistency.

3. Add the goat cheese and pork to the cream and bring the mixture back to a simmer. Continue cooking until it coats the back of a spoon, about 30 minutes. 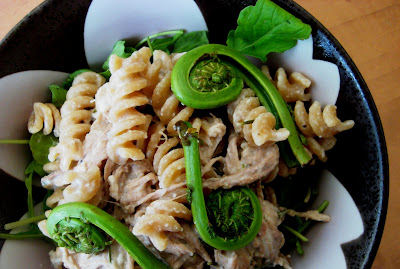 And, of course. Happy Mother’s Day to all of you moms out there! And to mine! Love you muchly!