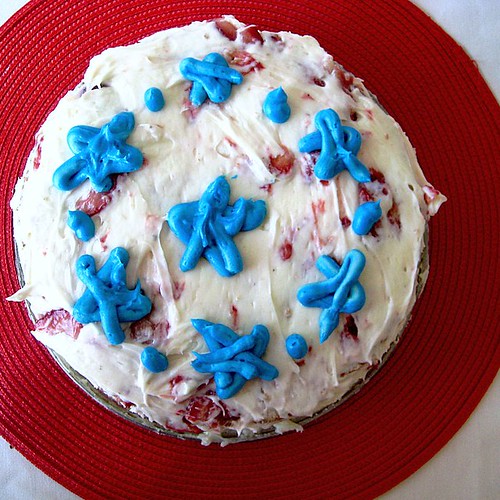 I really got into the spirit of things yesterday.

I bought red, white, and blue cupcake liners from the grocery store.  They are now sitting on my shelf in my pretty new IKEA bookshelf that is reserved for baking supplies. It also holds my piping tips, piping bag, and two 9 inch cake pans.  Why the pans have ended up in my room and not in the kitchen, I can’t really say.  But I’m sure it has something to do with my undying patriotic fervor.  Somehow. 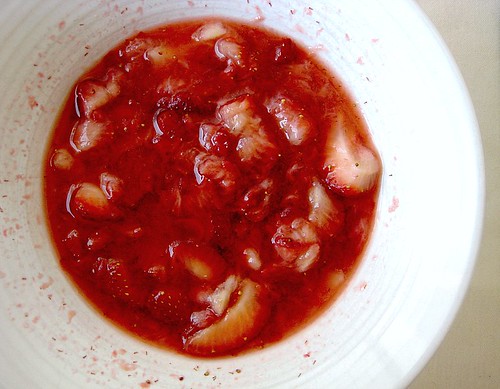 I bought silly straws.  For my brother.

Because he felt it wouldn’t really be the 4th of July if he couldn’t drink Sam Adams Summer Ale out of  a silly straw. 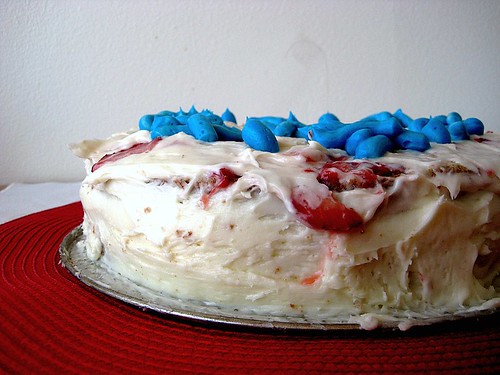 I attempted to have the sex talk with my 13 year old sister.  Given the rates of teen pregnancies in this country.  And the drain they end up being on the nation’s economy.  I would venture to say that this was one of the more patriotic things I did all day.

In fact, someone should make a public service announcement about it.  Especially here on the upper east side where parents care more about their bank accounts than their child’s sex life.  It could come with a tax write off.  Or something.

Just one of my many stellar ideas as to how we can solve the national budget crisis. 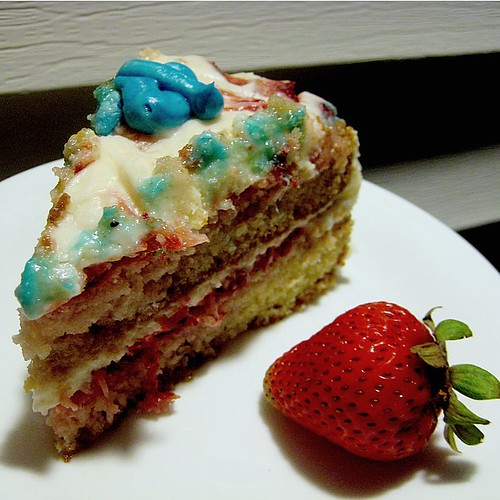 I pondered the legality of eating the American flag.

I mean.  We all know it’s illegal to destroy the flag.  Burning.  Tearing.  Cutting.  Shredding.

And in its most literal form.  Eating is certainly an act of destruction.

But then again, it’s also an act of love.  Passion.  Adoration.

So did I feel guilty eating this cake?  No, I did not.  Actually, I felt extremely pleased with myself.  And kind of wished I hadn’t left the remaining slices with my parents.  (Then again, if it is illegal, it’s better to leave the evidence with them.  They would hold up much better in prison than I would. I mean.  Me and prison food?  Not happening.)

Although I did padlock my door before I went to bed.  (Not that this would stop the feds.  But it would least buy me some time.  Deter them a little.  Allow me to formulate an exit strategy.  One that would hopefully work better for me than it has for the troops in Iraq.)

And spent an hour brushing my teeth trying to get the blue food dye out of it.  (To no avail.)  Nope. I had nothing to do with this cake at all whatsoever.

This fantastic cake with it’s strawberry soaked layers and it’s cream cheese buttercream frosting.  That, if anything, will make you realize what life, liberty, and the pursuit of happiness are all about.

Yeah.  I’m going to go not get another slice of it from the fridge.

The life of a fugitive is hard.  But someone’s gotta do it. 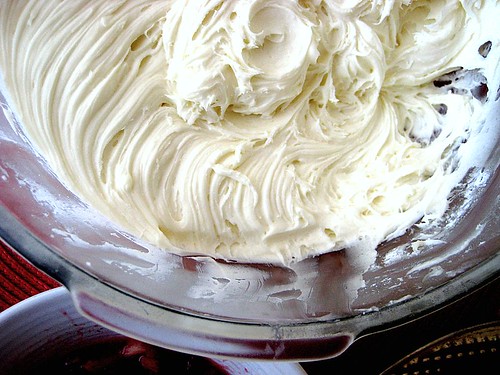 1. Preheat the oven to 350.  Sift together the flour, baking soda, cornstarch and salt in a medium bowl.  In another bowl, cream together the butter and sugar.  Add in the eggs one at a time, mixing well after each addition.  Add the sour cream and vanilla and mix until well combined.  Mix the dry ingredients into the wet, stirring until just incorporated.

2. Pour batter into a greased 9-inch cake pan that is at least 2 inches deep.  (Ree uses an 8-inch cake pan, but I don’t own one.)  Bake for 45-50 minutes or until a toothpick inserted comes out clean.  (The outside will be pretty brown.  Don’t be alarmed.)  Immediately remove from cake pan and allow to cool on a cooling rack.

3. Stem strawberries and slice them into a large bowl.  Mix with 3 tbsp sugar and let sit for 30 minutes.  Mash the strawberries and divide into two batches.  Mix each batch with one tbsp of sugar.  Allow to sit for another thirty minutes.

4. Combine the cream cheese, 2 sticks butter, powdered sugar, vanilla, and a pinch of salt in a large bowl.  Mix together until light and fluffy.  Place in the fridge until ready to use.

5. When the cake is COMPLETELY cool, cut it in half widthwise.  Spread strawberries evenly over each half, cut side up, including ALL of the juice.

6. Use a little less than 1/3 of the icing to spread over the top of the strawberries on the bottom layer.  This doesn’t have to be perfect so don’t stress when it’s not.

7. Place the second layer on top.  Add the remaining icing to the top and sides, spreading evenly.  I had some icing left over so I dyed it blue and piped stars onto the top of it.  Perfect for the 4th of July but maybe not for your 25th wedding anniversary.  Use your own judgment here.

8. Make sure to store this in the fridge until ready to eat otherwise the buttercream will melt! 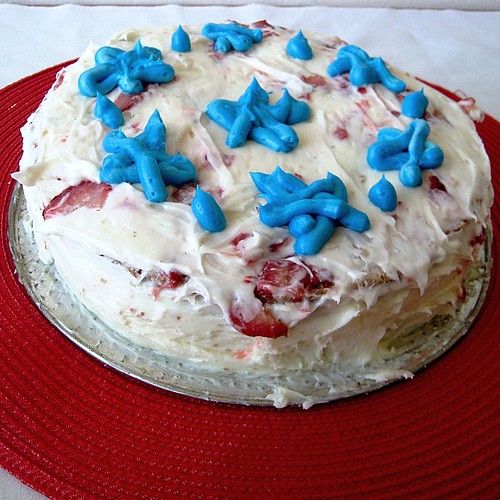 Semi unrelated side note.  Last week, I got an email from Danny of Danny Macaroons asking me if he could hand deliver some of his confections to my door.  While I don’t usually accept candy cookies from strangers.  If there’s one thing I’ve learned it’s that when a guy offers to bring you baked goods.  You don’t say no.  Ever.  As these instances are few and far between.

Danny Macaroons supplies macaroons and pistachio biscotti to cafes and to individuals throughout New York City.  I was given chocolate and caramel topped ones to try.  And I have to say.  These were utterly fantastic.  They were even given the Sophie seal of approval.  And Sophie doesn’t even like dried coconut.  So if you live in NYC and are ever in need of a macaroon.  Danny is definitely the guy to call.

ALSO.  The REGIONAL RECIPES: GREECE Round-up is up!  Our new country will be posted later today! 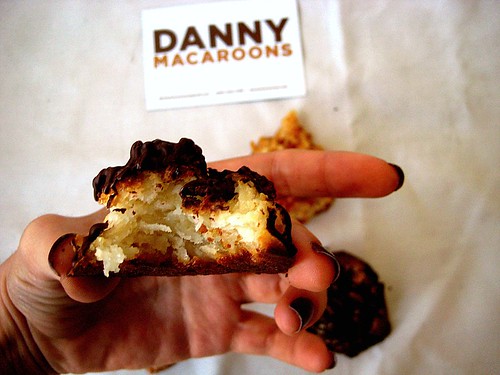