Fig and Ricotta Pizza with a Maple-Balsamic Reduction 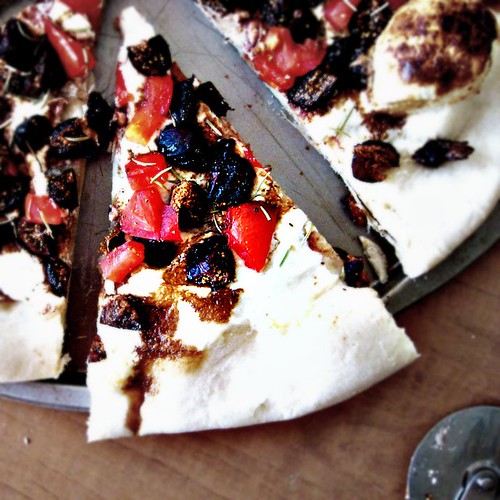 If you follow me on Twitter (and if you don’t. Well.  That’s awkward.) then you know what kind of shenanigans I’ve been up to.

All sorts of sordid things, really.  Most of which have to do with which nerve goes through which of the thousand holes in the skull.  And/or the real housewives.  Sometimes both in the same tweet. 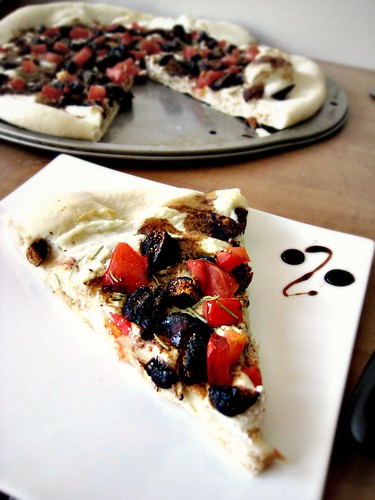 Last week specifically, though.  I reported to the world at large that I had made crack.

One would have thought that the government has the police or the FBI or some official agency carefully searching Twitter for incriminating statements like that.  In fact, I was pretty sure that some local authorities were going to knock on my door at any moment and demand that I hand over the goods.

I was kind of hoping for that, actually. Especially if one of them could have looked like Jack Bauer.  My response would have been, “Take me away, Jack.  I’ve been a very bad girl.”

But. No such luck. 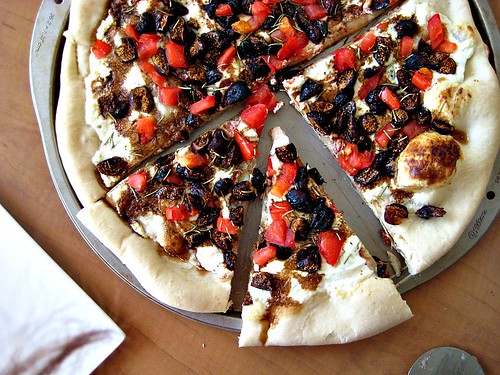 Eventually, after enough time had passed that I had given up on the whole Jack Bauer scenario (sigh.  Another one bites the dust.).  And after I had gotten a few replies from random people actually wanting to make some kind of drug deal (I found it strangely comforting to know that someone is using Twitter appropriately). I clarified.

Oh, you thought I meant CRACK.  What a coincidence!  I was actually referring to pizza.

(Not a coincidence at all.  But let’s be real.  These people are so drugged up that they don’t know what the word coincidence means.  I mean, they’re searching Twitter to find illegal drugs.  Who does that?) 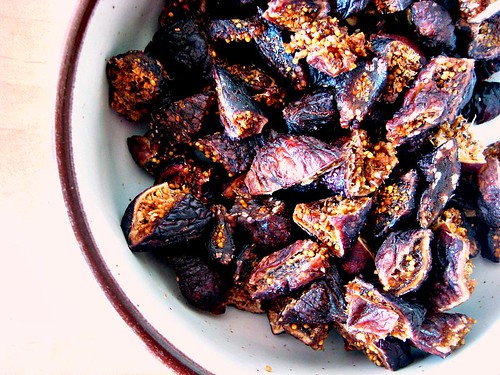 Actually, though.  I stand by my original statement.  This pizza.  This brainchild of mine.  Is actually quite crack-like.

It was first inspired by a ricotta and fig tartine I had a Le Pain Quotidien when the professor I was working with this summer took us all out to lunch on one seriously rainy day in August.  When I ordered it, I had no idea what a tartine was but they had me at the word “figs” and the buck stopped there.  A tartine, according to Pain, is basically a few slices of toast covered in ricotta, topped with some dried figs, tomatoes, and a drizzle of honey.

Hellagood.  But not worth the money when I can go home and reinvent it.  And so it was.  I was all set to recreate it, in pizza form because isn’t everything better in pizza form, when it dawned on me that a maple-balsamic reduction would be so much better than honey.  And the whole thing would taste so much better with rosemary and a touch of sea salt on top.

And though I knew it would be good, even I wasn’t prepared for just how much I would want to eat it every day for the rest of my life.  But when I took the first bite, I swear that I swooned.  Then I thought, hmm.  Maybe that was a fluke.  A “fluke bite”.  That would be sad.  So I went in for a second bite.  And man, that was no fluke.  That was crack.  Pure and unadulterated. 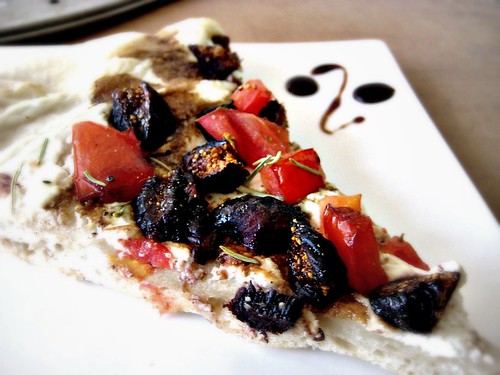 Fig and Ricotta Pizza with a Maple-Balsamic Reduction
Serves 4

1. In a small bowl, mix the yeast with 1/4 cup of the lukewarm water and a pinch of sugar.  This should start to foam within about five minutes. If it doesn’t, then your yeast has probably gone bad.  Not good.  Try again with some new yeast.

2. In the bowl of your stand mixer, combine the flour, sea salt, olive oil, and remaining water.  Add the yeast mixture.  Stir on speed 2 with a bread hook until combined.  Then stir for 2 minutes on speed 2 to knead.  Place in a greased bowl, cover with a damp towel and allow to rise for two hours.

3. After two hours, cover it in flour and form it into a ball.  Allow to rest for 20 minutes.  Roll out onto a pizza peel if using a baking stone or a pizza pan if not.

2. In a small nonstick skillet, heat the maple syrup and balsamic vinegar until boiling.  Simmer until thickened and reduced by half, about 3-5 minutes.

3.  On the rolled out pizza, spread the ricotta.  Sprinkle with dried figs and tomato pieces.  Sprinkle with rosemary, sea salt, and freshly ground black pepper.  Drizzle liberally with maple balsamic reduction.  Put in the oven and bake for 10-15 minutes or until the bottom is light brown.  Eat.

This has been yeastspotted!  And is being submitted to Two For Tuesdays! 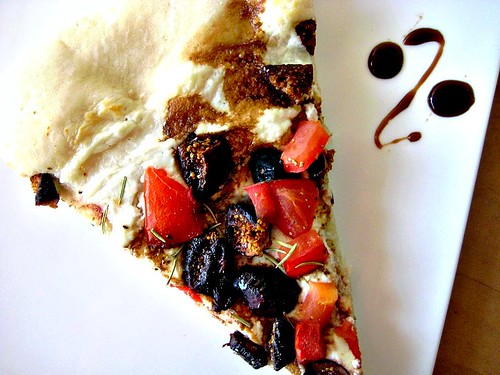