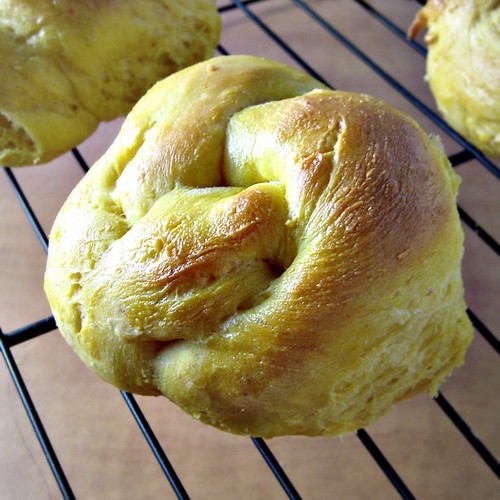 I spent an irrational amount of my high school years protesting.

We walked out.  We sat in.  We made posters.  We chanted.

Heck, we all but marched on Washington.

And yet, that’s really not me.  I’m not usually one to get swept away with self righteousness or feel a connection to a cause that’s so all-encompassing that I’m sure I can’t live without blocking traffic or toilet paper-ing someone’s car.

This may come as a surprise.  But I’m pretty complacent. 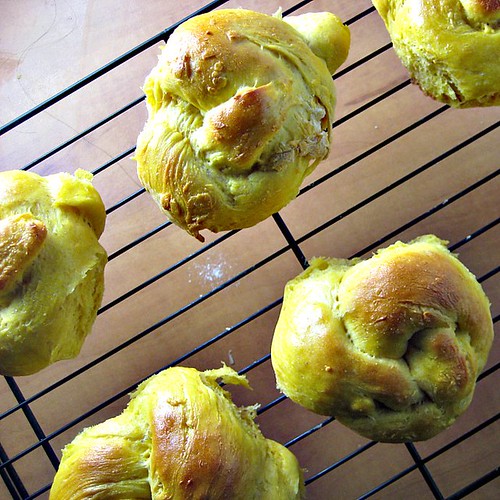 You see.  Every year my brother and father insist on making stuffing from a box.  Or a bag.  And every year, I fight tooth and nail for my right to homemade stuffing.  (Truly, if such a right isn’t already in the Constitution, I plan on writing a bill to have the damn thing amended.  Hallelujah.) Stuffing with a little something called flavor.  Stuffing that does not merely consist of synthetically produced bread cubes that are chock full of high fructose corn syrup, sausage, and celery.

No, no, no.  I wanted robust flavors. Homemade brioche, perhaps.  Or pumpkin cornbread.  With sausage, cranberries, raisins, sage, leeks, chestnuts.  Some sweat, blood, and tears.

Sigh.  Doesn’t that sound picturesque to you? 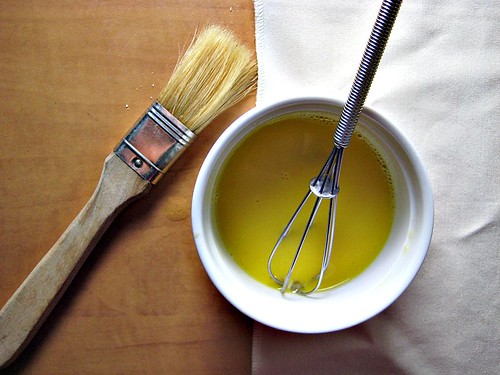 This proposal was, as you might have guessed, promptly rejected.  For no rational reason other than “because we said so”.

And so, remembering the one thing I’ve learned in med school which is that sometimes you have to do irrational things in irrational situations. I felt that I was left with only one recourse (other than storming the place and taking down every man, woman and child in my wake).  That being, of course.  To boycott.

And, of course, I baked these pumpkin rolls.  Because I truly felt that I should not be banished to a carb-free Thanksgiving just because my family can be just about as gauche as they come.  (And also because I didn’t want you to read about me the next morning in the paper.  I’d be “that girl who killed her family over a pile of mass-produced bread cubes”.  No one wants that. And in my experience, nothing relieves stress more than digging your fingers into a pile of dough. Or setting your stand mixer to 2 and letting it beat the crap out of your dough.  That’s pretty gratifying, as well.)

So I arrived at my parents house.  With the rolls (and guns) blazing in their holsters (err…bread basket).  Expecting that I would be the sole ingest-er of these little knots of pumpkin challah good-ness and really excited about the extras I would get to take home and smear with peanut butter and cranberry sauce the next day.  But then something shocking happened.  Within about ten minutes of my being home, my brother waltzed into the living room stuffing a roll into his mouth.  And then another.  And then another.

The rolls were a hit.  Rightfully so, of course.  They were fantastic.  Fluffy in all the right ways with just a subtle hint of sweetness.

With the take home message being that the power of homemade bread knows no bounds.  (Hear that brother?  And father?  Homemade bread. NOT bread from a small plastic bag.)

And so, I will surely be making these again next year.  With a twist.  Little does everyone know, I have grandiose plans for these babies.  Plans that involve savory pumpkin roll stuffing.  Did I hear someone call for a throwdown?  Boo yah. 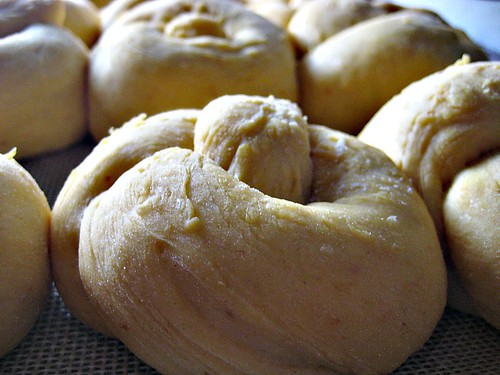 1. In a bowl, dissolve the yeast in the warm milk.  Throw in just a pinch of sugar.  Watch to see if yeast starts to foam. If it does, that means it is ready to go!  If not, then it’s probably dead and you need new yeast.

2. Pour the yeast into the bowl of a stand mixer and add butter, sugar, pumpkin, 3 eggs, salt and 3 cups flour. (*the original recipe only called for adding 2 eggs here but I can’t read apparently and so I added three.  I probably added a hint of flour to compensate for the extra liquid, but honestly I saw no problem with them so I am going to stick with three*).  Mix with a bread hook until smooth.  Add enough of the remaining flour to form a soft dough that is not too sticky to handle.  Mix with the mixer for about 2-4 minutes to knead, or until smooth and elastic.  Alternatively, put onto a floured surface and knead with your hands for 6-8 minutes.

3. Place in a greased bowl.  Cover and let rise in a warm place until doubled, about 1 hour.  I like to preheat my oven and let the bowl sit on top of it.  Punch down dough.  Turn onto a lightly floured surface and cut in half.

4. Shape each portion into 12 balls.  Roll each ball into an approximately 10-inch rope.  Tie into a knot and tuck in ends on each side.

5. Place two inches apart on a Silpat or baking sheet covered in parchment paper.  Cover and let rise until doubled, about 30 minutes.  Preheat oven to 350.

6. In a small bowl, beat the remaining egg with 1 tbsp cold water.  Brush over rolls.  Bake at 350 for 15-17 minutes or until golden brown.  Remove from pans to wire racks. 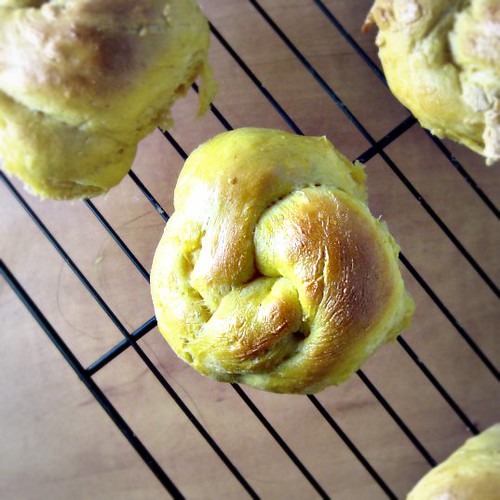