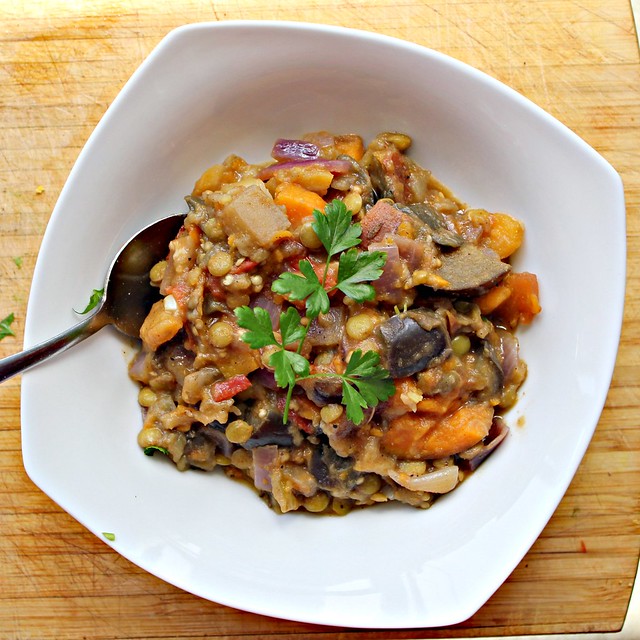 My brother has a knack for keeping me on edge.

I like to tell myself it’s just a phase.  And that it will end soon.  But it’s been almost 22 years.  I should give up hope.

He called me last night at 10:43 PM and asked me if I was watching television.

(You should know that I don’t own a television.  And neither does anyone in our apartment.  Now you see why I have time to write a food blog.  You people are my one and only favorite late night show.)

When I said no, he told me to turn on the television.

You see what I mean?

When he realized just how far he could go with this, he asked me if I knew what was going on.  Of course, at this point, I’m thinking bombs. Assasinations.  Terrorist plots.  Mass murderers.  National disasters.  Apocalypse.

I’m a very positive person, as you can tell. 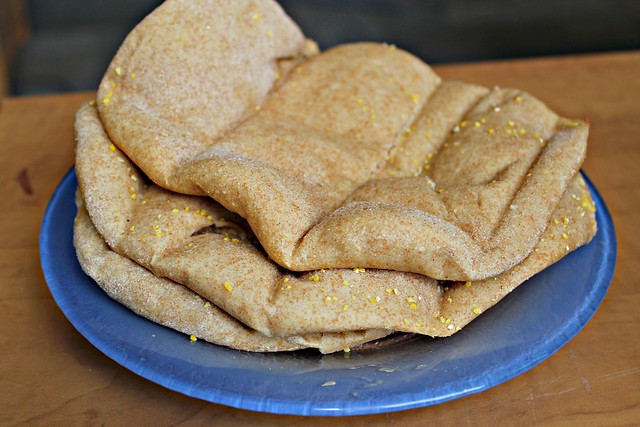 So as I got up to gather my belongings and head for the nearest bomb shelter or wrap myself in aluminum foil to protect myself from radiation (would that work, do you think?).  He took pity on me.

And told me the true story of what had happened.  Osama bin Laden.  Dead.

The world breathed one giant sigh of relief.

And I, well.  I slept better last night knowing that maybe I wouldn’t have to dream about bombs exploding around me or start shaking whenever my subway stops unexpectedly in-between stations, or have flashbacks to that terrible day. 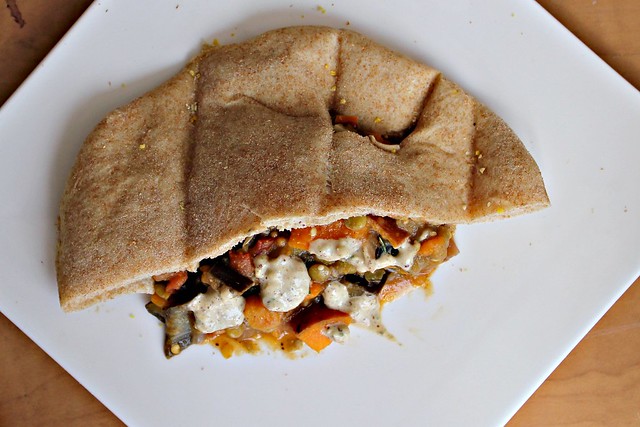 A week in which I developed at least four new injuries in my legs.  Tried twice to run.  And failed.  And ended up walking 6 miles instead.

A week in which I learned vast quantities of information about the heart, the kidneys, the lungs, the immune system, the GI system, the musculoskeletal system, and embryology.  And then proceeded to forget all of it within 24 hours.  (It’s an uphill battle, what can I say?)

And a week in which I received an email.

I could do this the Daniel way (my brother) and we could play 20 questions until you figure out what I’m talking about.

But I am not a sadist.  So I shall tell you.

From here on out, I am going to be writing a weekly post for Marcus Samuelsson’s blog!  (For those of you who don’t know, Marcus is a James Beard award-winning chef, cookbook author, and food activist.)  His “people” emailed me earlier last week asking if I would do it. (As if that were a question!)  The fact of which still absolutely takes my breath away.  Every day.  My first post has been written and sent off and I’ll be sure to let you all know when it appears on the blog! 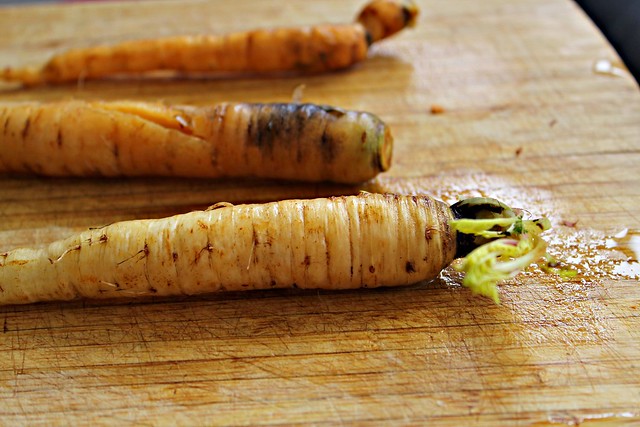 So to celebrate, I have made a dish from his cookbook, which I absolutely love.  He is a genius at combining flavors in new and incredibly exciting ways. In this case, taking an Indian-spiced veggie-rich pita filling and pairing it with a lemon-tahini sauce that is infused with chives.  (Chives?!?!?  Who would think of such a thing!  But it’s good. Really good.)  Thereby combining Indian, Middle Eastern, and American flavors all in one dish!

It truly makes for an incredibly healthy and tasty lunch.  Especially when served with a homemade whole wheat pita.

Yes. I went there.  (Maybe I do have a bit of sadist in me?  Or masochist? Or maybe I just hate studying?)  I have been scared of making my own pitas for forever but really it was so easy.  Just look at how fluffy they are!  Plus, have you looked at the ingredients on the back of most bags of pitas, lately? Yuck, is all I have to say about that. 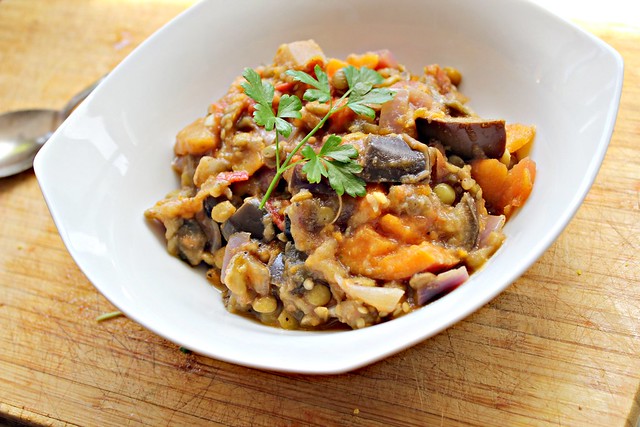 None of this has anything to do with this week’s Eat.Live.Be. topic which is to choose one bad habit that we want to break.  And then attempt to break it over two weeks.

My bad habit is this.  I have a tendency to view foods in black and white.  There are “good foods”.  This lunch is an example of a “good food”.  And then there are “bad foods”.  A cupcake.  Would be a “bad food”.  The problem is that when I eat a “bad food” I get so bent out of shape about it that I go a little crazy.  I berate myself, I feel guilty, and then of course I eat more “bad foods” to punish myself.  It’s truly the most vicious of vicious cycles.

So my goal for the next two weeks is to stop categorizing food like this in my mind.  Because you know what?  I can eat a cupcake or a piece of chocolate and the world won’t end.  It won’t mean I’m a weak person.  It’s not bad.

It’s a shade of gray.

I’m hoping this will put me in a better mindset in general.  We’ll see how it goes!

Do you have any bad habits you want to break?  Write a post about it or leave a message in the comments!  And check out what habits these other Eat.Live.Be-ers are breaking! 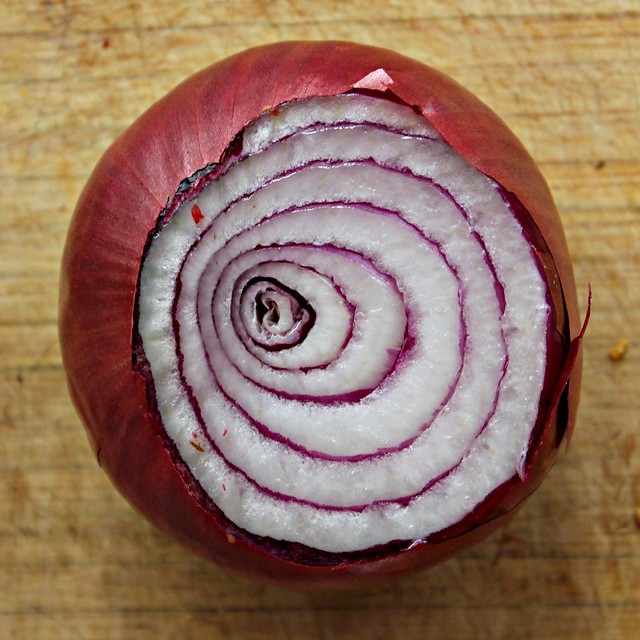 1. In the bowl of a stand mixer, combine the yeast, honey, and 1/2 cup warm water.  Stir gently to blend.  Whisk in 1/4 cup bread flour and 1/4 cup whole wheat flour until the mixture is smooth.  Cover loosely with saran wrap and set aside until doubled in bulk and foamy, about 45 minutes.

2. Remove the plastic wrap and return the bowl to the stand mixer.  Using the dough hook to mix, add the remaining 3/4 cup water, 1 1/4 cups bread flour, 1 1/4 cups whole wheat flour, olive oil, and salt.  Knead on low speed until the dough is smooth and elastic, about 8 minutes.  As you do this, add more flour if, after two minutes of mixing, the dough sticks to the sides of the bowl and not the hook.  Transfer the ball of dough to a lightly oiled bowl, turning once to coat.  Cover again, loosely, with saran wrap and allow to rise for 1 hour or until doubled in bulk.

3. Place an oven rack in the middle of the oven and preheat to 500.  Once the dough has risen, transfer to a lightly floured work surface.  Punch down the dough and divide it into 8 equal pieces.  Form each piece into a ball, flatten a bit, and then use a rolling pin to roll it into a 7-inch-ish round.  Transfer the rounds to a baking sheet or other work surface that has been sprinkled with cornmeal.  Once all the rounds are done, loosely cover with a clean kitchen towel and let rise for 30 minutes or until puffy.

4. Transfer 2 pitas, one at a time, (or 4 if you’re a good multi-tasker) onto the baking surface. Either use a baking stone or do what I did and put the pitas directly onto the rack.  Bake 2 minutes until puffed and golden.  Then, using tongs, flip over and bake for 1 more minute.  Transfer to a cooling rack and let cool completely.  Repeat with remaining pitas.

1. Bring a large pot of salted water to a boil.  Add the potatoes, lentils, carrots, and eggplants and boil for 10 minutes. Strain and set aside.

2. In a large saute pan, heat the oil over medium heat.  Add the chiles, garlic, onions, garam masala, mustard seeds, cumin and tomatoes and saute until softened, about 5 minutes.  Add the coconut milk and reserved sweet potatoes, lentils, carrots, and eggplants and simmer until the veggies are softened, another 10 minutes.  Stir in the lime juice and cilantro and season with salt and pepper.

3. Slice the pitas to form pockets.  Spoon in the vegetables.  Drizzle with lemon-tahini sauce.

1. Combine the ingredients in a food processor.  Puree until smooth.  Add more water and salt/pepper to taste.  **The recipe calls for you to saute the garlic first but I love me some raw garlic.  Feel free to do as you wish! 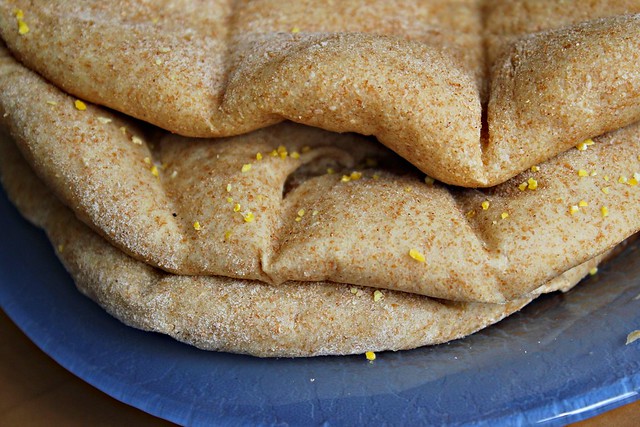