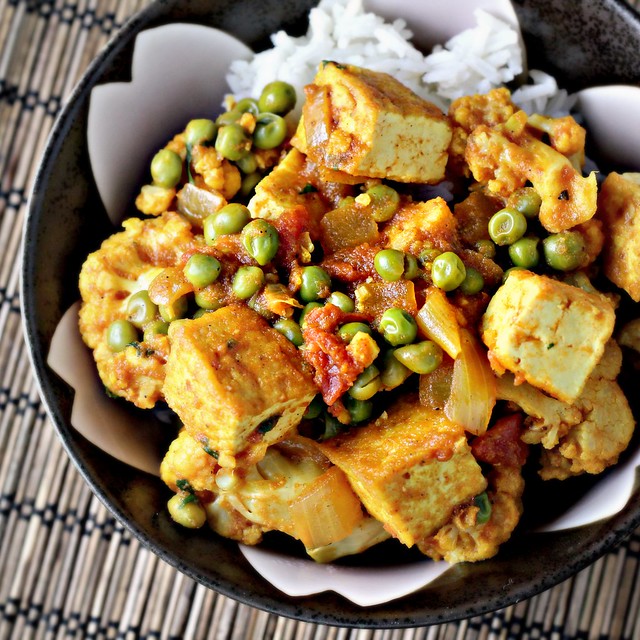 If you have curry-infused dreams like I do then you should head over to Marcus Samuelsson’s blog and check out my post and recipe for this paneer curry with peas, cauliflower and tomato-chili sauce!

I’m also going to do something I don’t normally do here, which is restaurant reviews.  I thought it might be helpful to anyone thinking of traveling to the Fort Lauderdale/Hollywood area if I talked about the places we ate while there…the good, the bad, and the gag-reflex-inducing.

The Broadwalk – Simply put, I hated the food on The Broadwalk (and no, I’m not spelling it wrong. That’s what they called it.)  It was basically a summation of everything that I believe is wrong with the way most of America eats.  Almost everything was fried and if it wasn’t, it came with a fried side dish.  There was nary a vegetarian option in sight other than a salad that consisted of lettuce, tomato, and nothing else, and the few vegetable side dishes that were on the menu…were smothered in butter.  And it’s not like this was limited to one “restaurant” (I use the term loosely) along the strip.  We ate at a different one for lunch almost every day and they were all the same.  Now, just to be fair, The.Boy. was not as unhappy with The Broadwalk food as I was, so I really think it just comes down to the fact that I am picky.  I cook really good, inventive vegetarian food every day and it baffles me when someone who does this for a living can’t come close to what I can make in my own home.  To someone who is looking to eat a burger and fries every day for seven days straight…The Broadwalk is perfect for you.  I’m just not that person.

Sardelli’s – Sardelli’s is, literally, one of those hidden gems that you stumble upon almost by accident (there wasn’t even a sign on the door! We had to ask the valet where the entrance was.)  It’s an Italian restaurant/steakhouse that has a homey yet elegant feel to it.  To start, the chef sent out a potato soup on the house that was to-die for. There was a hint of truffle in it and it was creamy and utterly amazing.  The.Boy. had the pasta bolognese, which was made with homemade pappardelle.  I’m pretty sure he was in heaven.  I had the butternut squash agnolotti (also homemade) in a sage brown butter sauce.  Just what I was craving.  The real kicker, though, was dessert.  The.Boy. got this totally luscious mini apple pie that was basically a dream while I got creme brulee with a layer of chocolate truffle on the bottom.  This was by far our favorite meal of the vacation.

Lola’s On Harrison – Lola’s was my fine dining restaurant pick of the vacation.  Located in Downtown Hollywood, it was a great start to a night that was full of karaoke and Olympic-watching.  The.Boy. ordered a steak while I got the herb crusted salmon which came with a wheatberry cucumber tomato salad (yes, I still eat fish on RARE occasions. Mostly salmon and sushi.  The few times I’ve eaten other types of fish I realize that actually, I don’t like fish that much.  If we’re being honest…I mostly got it because I wanted that salad.  Worth it.)  We split a dessert of chocolate truffle cake that was totally delicious.  It came with an espresso-infused ice cream that The.Boy. was none too pleased with given his disdain for all things coffee but even he conceded that it was tasty.

Red Thai Sushi – The.Boy. had never had sushi and since it is such a love of mine, I felt compelled to sit him down and force feed it to him at least once during our vacation.  By which I mean, he saw that I was in such a bad mood about The Broadwalk food that he would eat anything to make me happy.  Even raw fish.  This was one of the best rated restaurants in Hollywood according to Yelp and I was really pleased with it.  They gave you a lot of sushi for your money (at least compared to NYC) and everything was quite tasty.  Even The.Boy. agreed.

Pachamamma – Don’t even get me started on the awfulness of this place.  Oh yes, this is the Peruvian restaurant of twitter fame.  The one with the waitress who refused to switch in veggies for steak in one of the dishes and instead offered to serve me just the sides that came with the dish but for the FULL PRICE. Uh, yeah.  No.  She also brought us water bottles instead of tap water without asking us which we wanted.  And charged us for it.  Needless to say, she did not get a very high tip and I left her a note giving her a piece of my mind and letting her know that I was a food writer and would be writing about my experience.  Don’t go here under any circumstances.

Sugar Reef – This was the only Broadwalk option that was tolerable. It was only open at night and served a mix of Thai/French/American fusion food.  The.Boy. got a grilled salmon with mango salsa that he raved about and I got a green fish curry that was way too fishy for my palate.  I ended up gifting almost all the seafood in it to The.Boy. and ate the vermicelli and spinach that were in it.  I think, though, that a person who likes fish would have actually enjoyed it.

Chocolada – Though Chocolada has a full menu, it is most widely known for it’s bakery.  We got dessert here after eating at the sushi place and really loved their pastries.  It reminded me of pastry shops on Arthur Avenue in the Bronx or in Little Italy.  Delicious.

Il Mercato Cafe – This restaurant was a little bit off the beaten trail in that it’s in Hallandale and not Hollywood and is located in one of the shopping centers on N Hallandale Beach Blvd.  Though this wasn’t our favorite meal of the vacation, it was up there. I had homemade artichoke ravioli that was served in a creamy sauce that somehow wasn’t cloying or overly heavy.  The.Boy. had lamb chops served over polenta and roasted veggies.  He really enjoyed the dish although he felt that they were a bit stingy on the meat.  We shared a gelato sundae for dessert that was revelatory.

Josh’s Organic Garden – Josh’s Organic Garden is Hollywood’s farmer’s market! It was located literally right outside of our hotel so we went bright and early on Sunday morning, the only day of the week it was open, and stocked up on fruit and some veggies.  We got a pineapple, mangoes, strawberries, peaches, plums…all of which we then used to make smoothies every day of the week!  They were delicious and so refreshing in the Florida heat.

I think that just about sums up my Hollywood, Florida food experience.  Although I did a lot of complaining about the lack of veggies, I was mainly only dissatisfied with The Broadwalk.  We really did eat some delicious meals while there!

44 Responses to Paneer with Peas, Cauliflower and Tomato-Chili Sauce