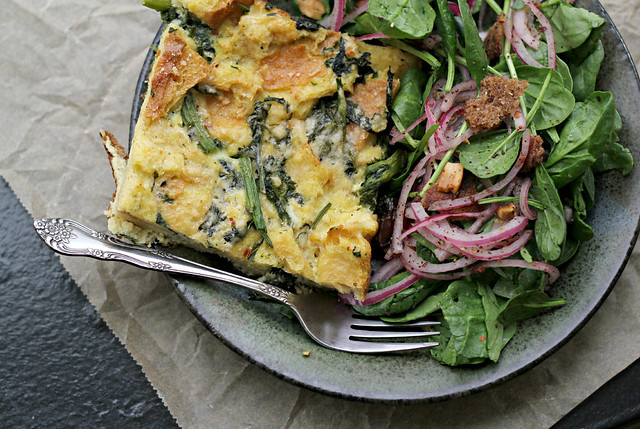 I spent four years in Boston during college and fell in love with the city almost instantly.

The excited fervor that took over the city whenever the Red Sox were playing; and, of course, the happy chaos when they won the World Series in 2007.

The almost palpable elation on the first day that felt like spring, as the whole city seemed to take to the streets to revel in the glory of it.

The ice cream. JP Licks – you’ll always be my one and only.

The Charles River, which I ran along more days then I can remember, going from one bridge to another depending on the distance.

The food, which was just so good. Some of my favorite restaurants of all time are in Boston and it was there that I stopped being a picky eater and started to taste everything. 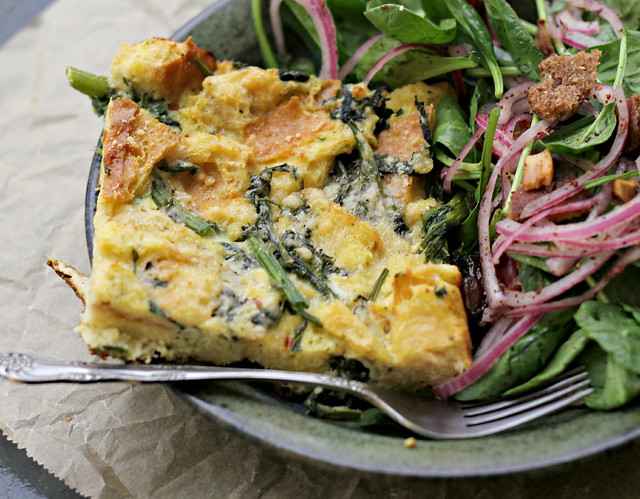 And then, of course, there was Marathon Monday.

I’d never really thought about marathons much at all before living in Boston, let alone running one myself. But in 2009 I went with my cousin Meghan to watch her then-boyfriend run Boston. I cheered along with her in Newton and then took the T with her to Boylston to see the runners as they neared the finish line. You couldn’t help but be taken with the thrill of it all.  I was training for my first half marathon at the time and it was that day, watching the Boston Marathon, that I decided I couldn’t just stop at 13.1.

For me, it was going to be 26.2 or bust.  Proof that you can’t watch a marathon and not be inspired. You just can’t. 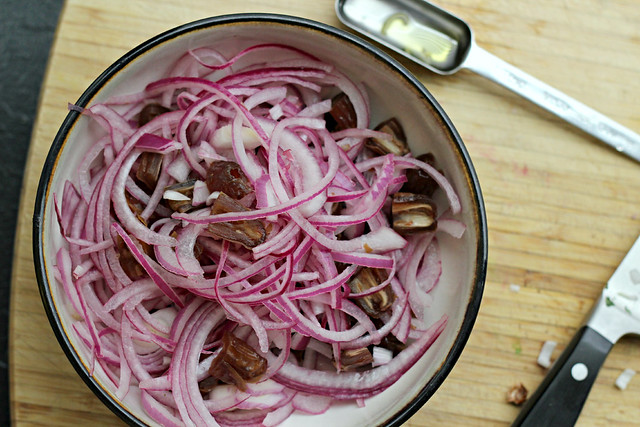 Which is perhaps why this hurts so much, why I, as a runner and a former Bostonian, feel as if this was such a personal attack.

When you train for a marathon you put in so much hard work and dedication, and to see the culmination of all that tarnished by so much pain and suffering is just terrible. And so unreal.

My heart and thoughts are with everyone who was affected by these horrific events.  We, as a running comminity, as a city, and as a nation are stronger than this.  And we will rise above it.  Because that’s just what we do. 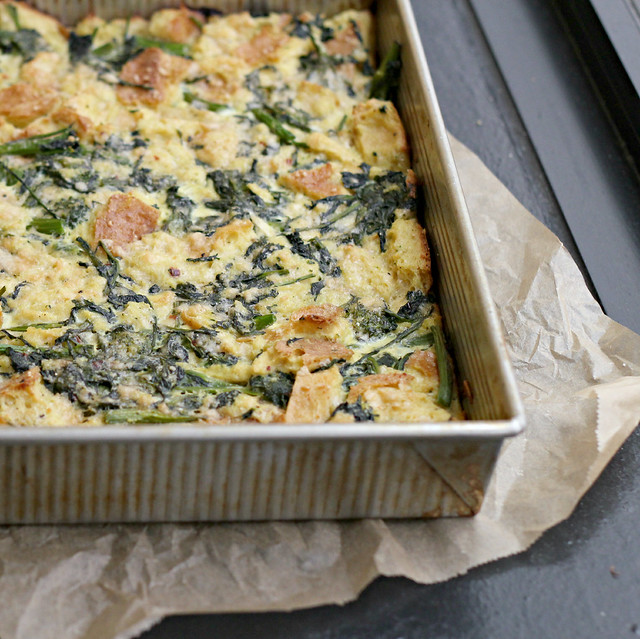 In the spring of 2011, I ran the Boston Marathon after qualifying at my first marathon in the fall of 2009.

It was an almost impossibly hard race, but I did it, and no one could ever take that away from me.

Since then, I’ve never felt any need to run Boston again. As I said before, it’s a hard course, and honestly, I’m nowhere near as fast as I used to be so qualifying would take a lot of hard work and a little bit of a miracle.  But after Monday’s horrific events, I know I need to run it again.

Whatever it takes to get there, even if it’s years in the making, I’m going to get there. 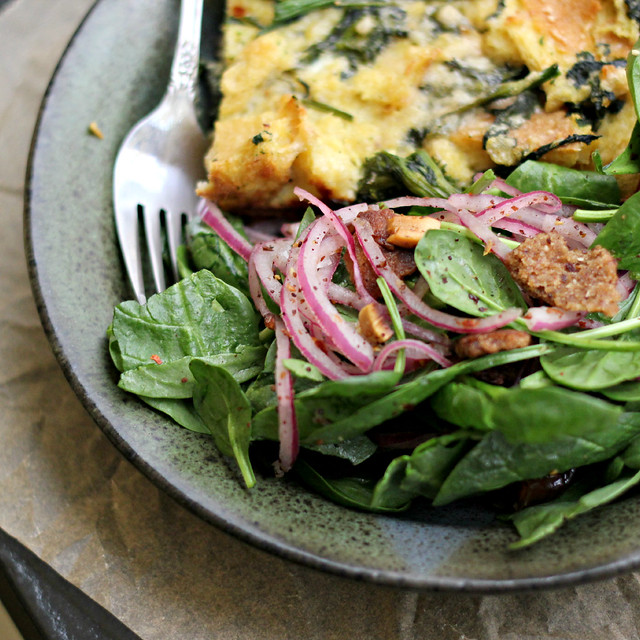 It’s kind of ironic that this beautiful meal is accompanied by all this and there’s no good or easy transition.

So I’ll just put it out there – this is the best thing I’ve eaten in a long time.  The bread pudding tastes decadent, but isn’t (250 calories/serving – WIN) and this salad from Ottolenghi’s Jerusalem is possibly one the best things I’ve ever tasted.  Definitely top ten.  Even The.Boy agrees with me on this one although, to be fair, he loves salad way more than I do.

There is just something so captivating about the combination of slightly pickled onions and dates with the spicy citrusy crispy crunchy sumac-coated pita croutons and chopped almonds. Every bite is magical. So much so that you don’t even remember you’re eating something that’s actually good for you.  I’ve made it twice in the past week and so if this isn’t love at first bite, I’m not really sure what is.  So if there’s anything you make from my blog EVER…make it this salad it. Trust me. 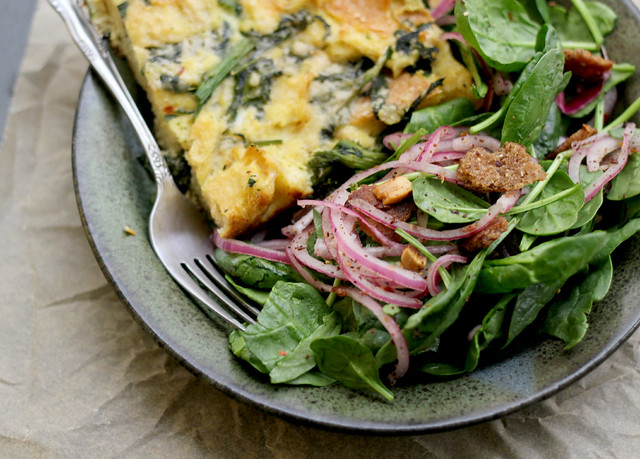 I am submitting this to I Heart Cooking Clubs as well as Souper Sundays hosted by Deb at Kahakai Kitchen. 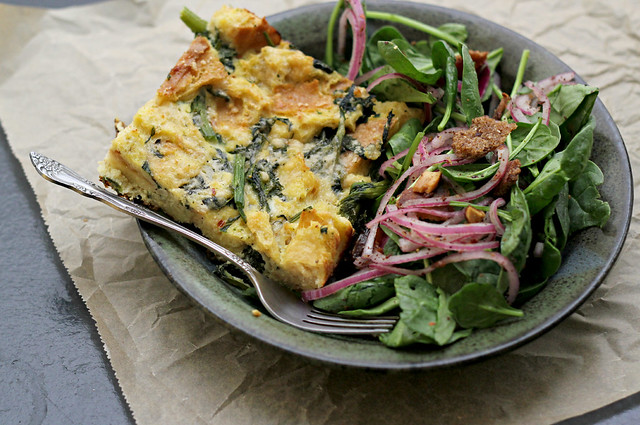