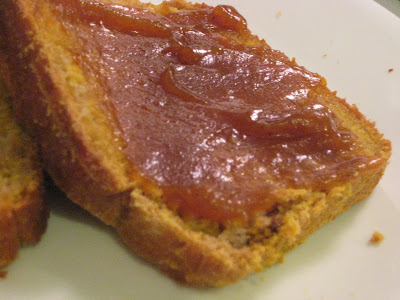 If you had asked me a year ago whether or not I would be sitting here today writing a blog post about baking my own bread, I would have laughed at you. And then secretly called up the local hospital to have you committed.

Of course, the blog wouldn’t have existed yet.

So that would have been point of contention numero uno.

But barring that, up until just a few months ago, I considered bread baking to be something that happened to other people. Pastry chefs, Michelin award winners, expert bloggers like Natashya from Living in the Kitchen With Puppies and Deb of Smitten Kitchen. Anyone but me, essentially. 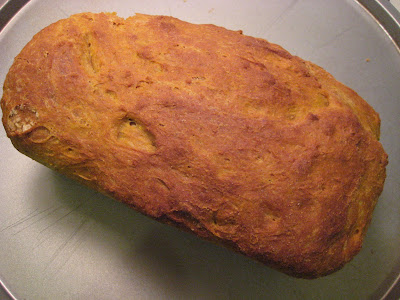 Or maybe I just can’t resist a good challenge. Or any opportunity to make a complete mess out of my kitchen and thereby drive my two roommates insane. And so really, I haven’t changed at all, I’m just perpetuating all of my previously known character flaws. 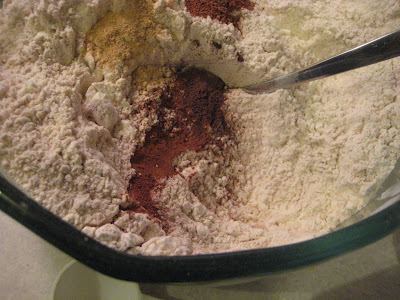 Either way, when I read about HBinFive on Big Black Dog, which is a new cooking group that is going to bake its way through Healthy Bread in Five Minutes a Day by Jeff Hertzberg and Zoe Francois, I knew it was something I had to join.

What does this mean for you, my dear readers? Well, it means that you are going to be reading about my adventures with bread for the next four years (there are 100 recipes and we are going to post every other week. You do the math.)

Wow. I did not do that calculation before joining the group. If ever I had any commitment issues here is where they would rear their ugly heads.

So speak now or forever hold your peace. 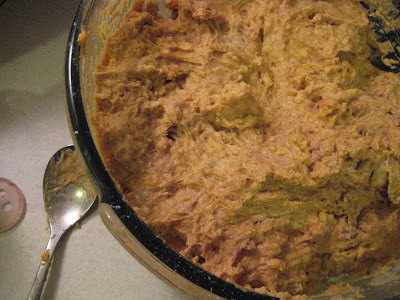 Then here we go.

While the regular postings don’t start until January, we have two bonus never-before-posted bread recipes that we are going to make, one in November and one in December. This whole wheat pumpkin pie brioche being the former. 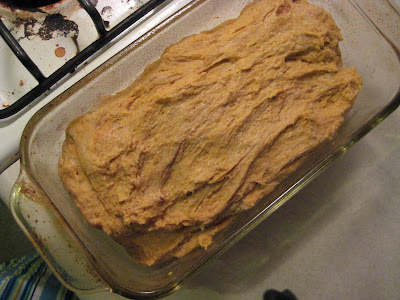 The Process: While I can’t post the recipes for any of these breads since the book has just been published and thus the recipes don’t appear anywhere on the web, I can certainly tell you, in vague and qualitative terms, about what exactly I went through to get this bread on the table. The first thing you should know is that the premise of Healthy Bread in Five Minutes A Day is that the recipes are (a) whole grain and relatively healthy and (b) require very little hands on time.

So basically, I spent about fifteen minutes gathering and mixing ingredients on Friday. Then I left the mixture to rise and went to the gym. Two hours later, I came back. The dough had risen to monstrous proportions. I was pretty sure it was going to devour me AND the betta fish that is currently living on my kitchen table. It then went into the fridge, where it rested until the next morning. When I took it out, broke it into two, and let half of it sit in a loaf pan for 90 minutes. The other half went back into the fridge. It rose yet again. (I’m telling you, the yeast are out to get me. First I end up with a Swedish tea ring the size of a pizza and now I have pumpkin pie brioche that won’t be stifled) Then into the oven it went, for about 40 minutes.

And voila! There you have it. I don’t actually think it could get easier than that. Unless maybe I had a heavy duty mixer to mix the dough with. But in reality, I kind of like getting my hands dirty. It makes me feel like I’m really forging a connection with my dough. We become emotionally attached, share a few Kodak moments. And then I eat it. The circle of life at its finest.

The only changes that I made to the recipe were to use whole wheat flour instead of white whole wheat flour, since my grocery store was out of white whole wheat. The recipe also gave you the option of using oil or butter as the fat of choice. I chose vegetable oil. No saturated fats for me. Also, no egg wash or sugar sprinkles on top. Because I was so excited that I completely forgot before throwing the bread in the oven. But that is what the second loaf is for. (Reason number 132 why I love bread baking – you always get second chances.) 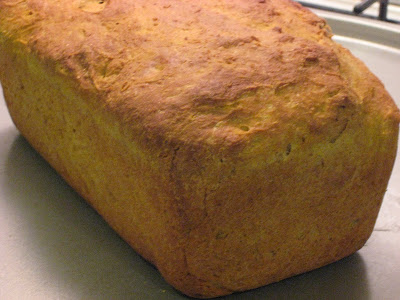 Okay But How Did It Taste: This bread was super moist and had little hints of pumpkiny flavor throughout. It is definitely a savory and not sweet bread, but all of the spices are certainly very reminiscent of pumpkin pie.

My favorite comment was from Sophie, who said that she could feel a nutmeg high coming on, that’s how good it was (she really loves nutmeg). (And yes it is true that in high enough quantities – 4-8 tsp – nutmeg can have psychedelic effects.)

I enjoyed the bread with a smear of pumpkin butter on it and last night also made some cranberry chutney to smother it in (more on that in a later post), which reallycomplemented the flavor profile of the bread.

Less than 24 hours later, the loaf is 3/4 gone. And all I have to say is, thank god I have that other half of dough in the fridge.

Check out the round-up over at Big Black Dog to see what everyone else did with this dough! Or join in yourself! As I said before, the regular posting doesn’t start until January so you have plenty of time to get involved! 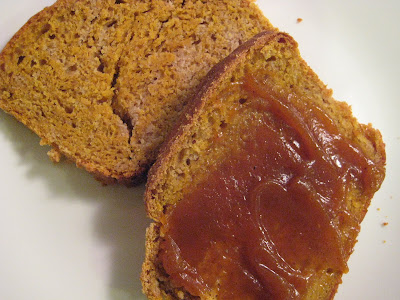