Watermelon, cucumber, and heirloom tomatoes are tossed with a lemony vinaigrette, toasted cornbread cubes, and arugula to make a hearty summer panzanella. 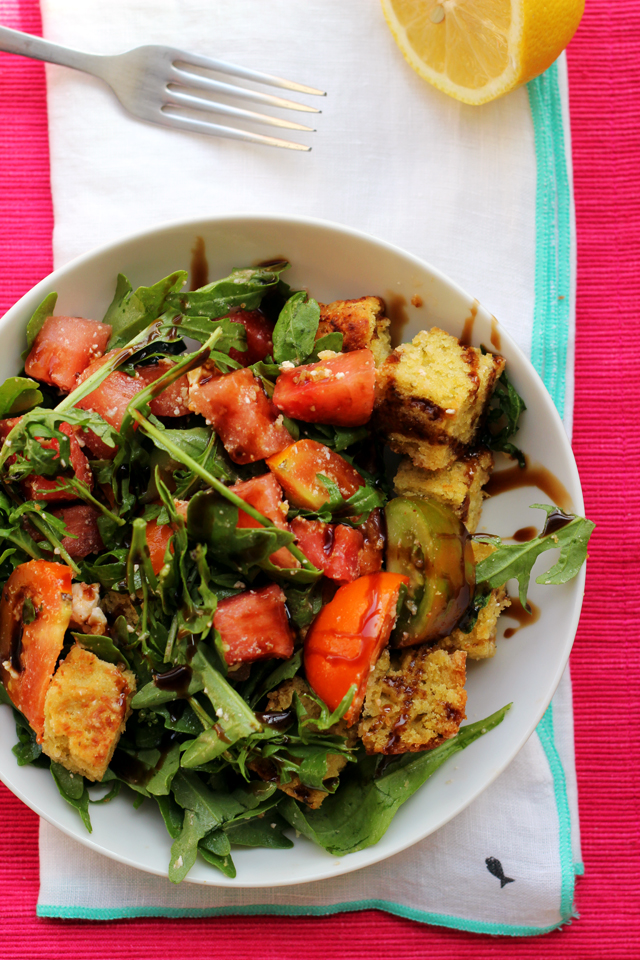 I ate salad for lunch EVERY DAY LAST WEEK.

And no one even gave me a crown or cookie or cash reward or anything. 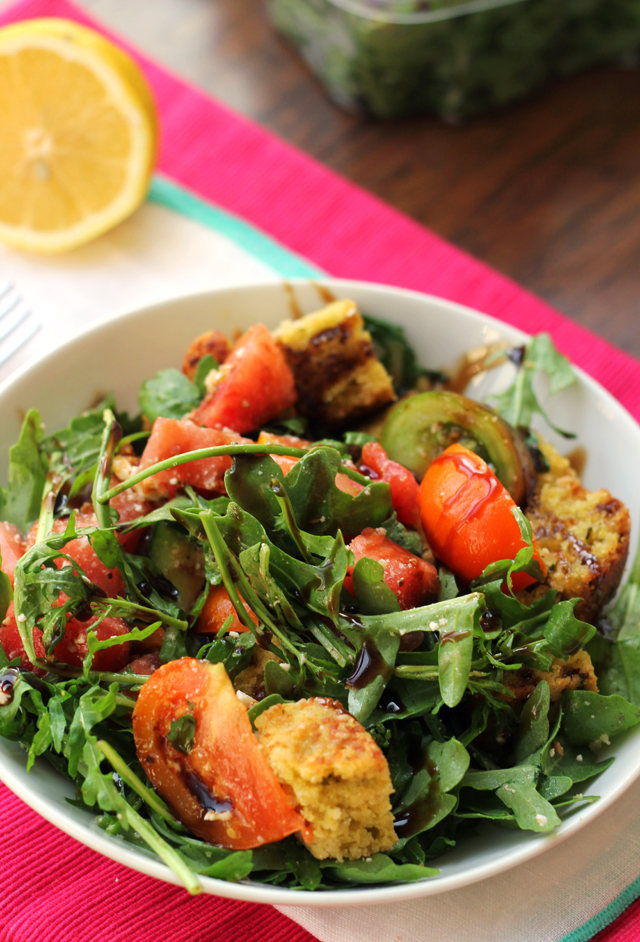 In fact, the.boy even had the audacity to question the fact that I was pondering having a second brownie yesterday.

The last time I checked, (a) it was Sunday a.k.a the weekend a.k.a calories-don’t-count-day and (b) there is no law against thinking about excessive brownie consumption (though NYC’s former Mayor Bloomberg probably tried to pass one).

And doesn’t he realize what a picture of salad-a-day perfection I was last week? 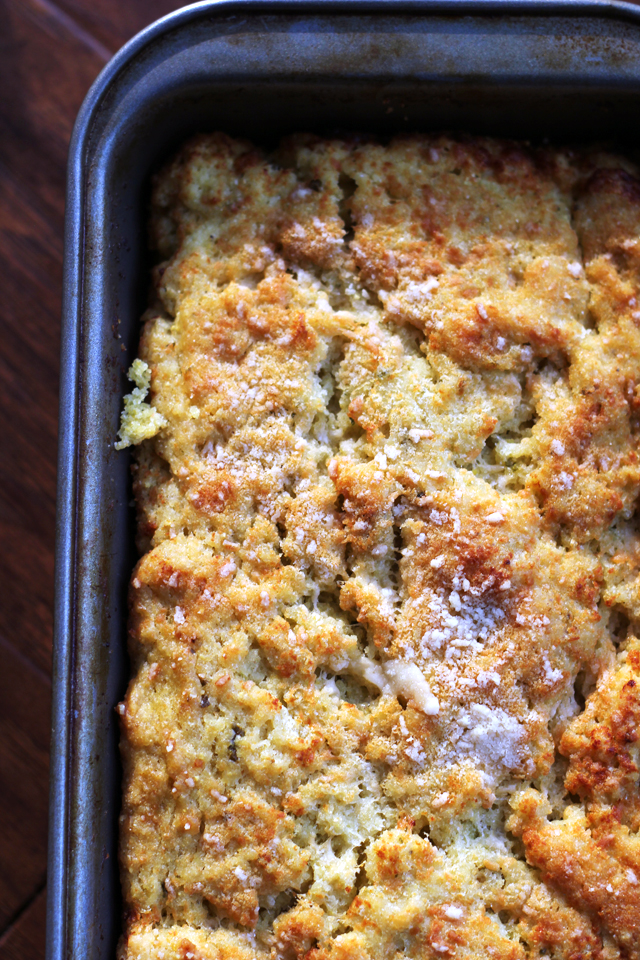 I know I kind of like to play the martyr, but between us, though?

The whole salad a day thing was pretty not hard. 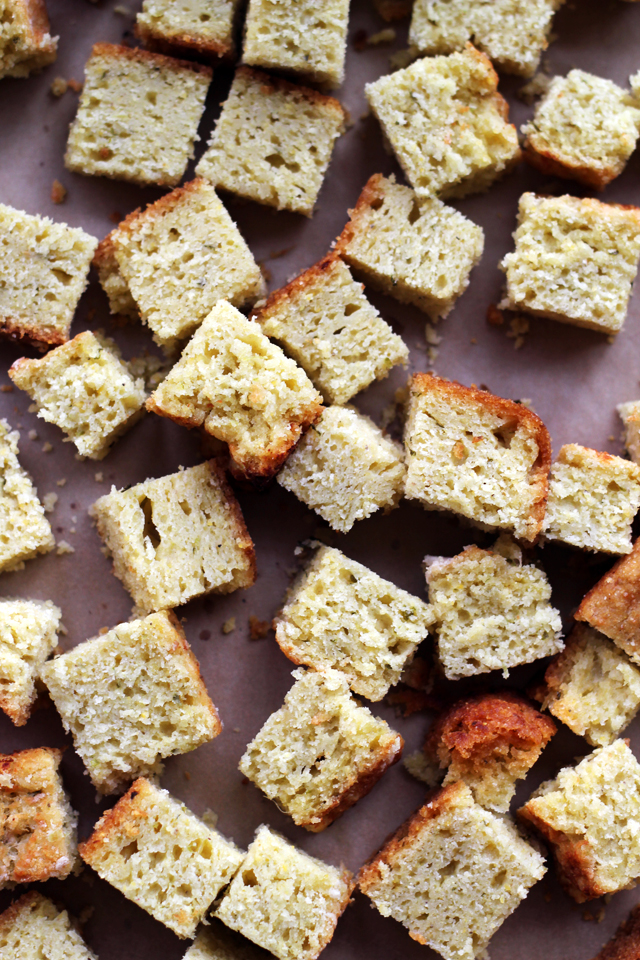 Did I mention that there were croutons? 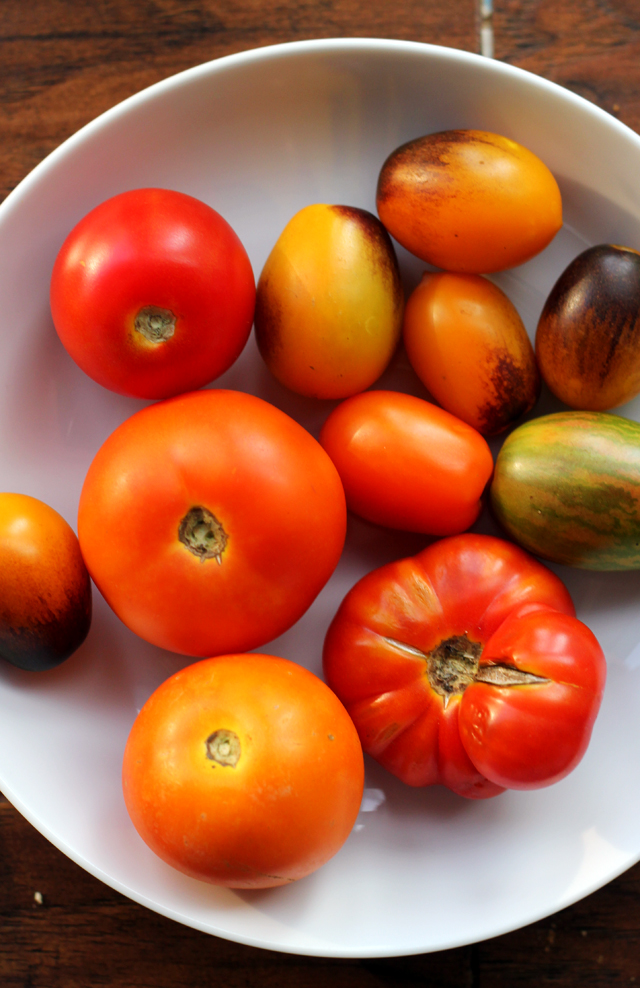 And watermelon and feta and croutons and the cutest baby heirloom tomatoes you ever did see? 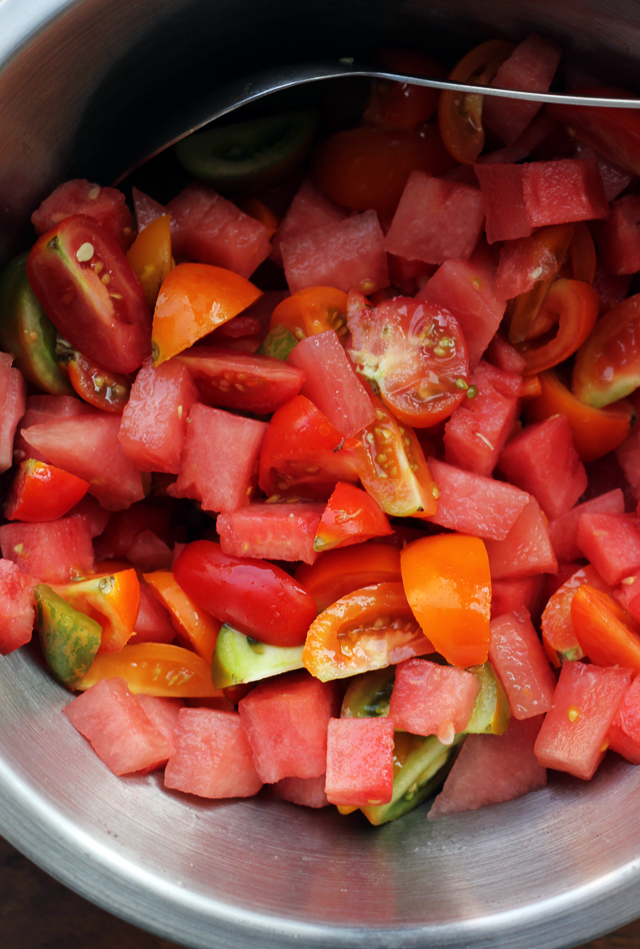 I am honestly not really much of a crouton junkie, but pesto+cornbread crunch+beer bread has certain powers of persuasion that other carb varietals just don’t have.

And yes, I understand that it takes a certain kind of crazy to make a loaf of bread solely to let it get semi-stale and toasty so that it can soak up dressing/tomato/watermelon juices better.

Crazy, but worth it. 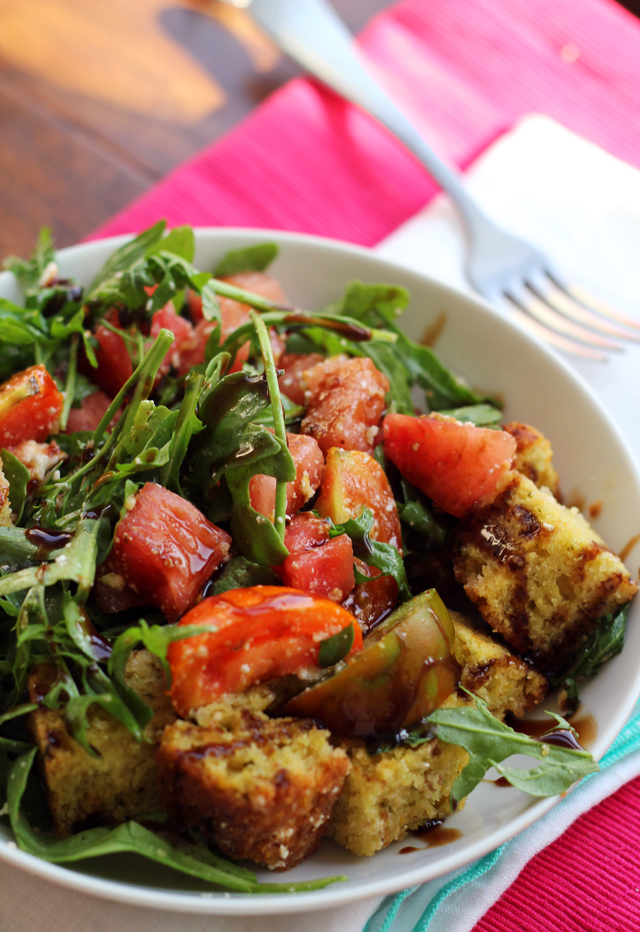 Though I still won’t say no to a cookie reward at the end of the week.

Print
Watermelon, cucumber, and heirloom tomatoes are tossed with a lemony vinaigrette, toasted cornbread cubes, and arugula to make a hearty summer panzanella.
Yield: 6 servings
Ingredients
For the cornbread
For the salad
Instructions
Notes
An Eats Well With Others Original
Nutrition Information
Serving size: 1 bowl
3.5.3208

For more summer panzanella recipes, check out these: 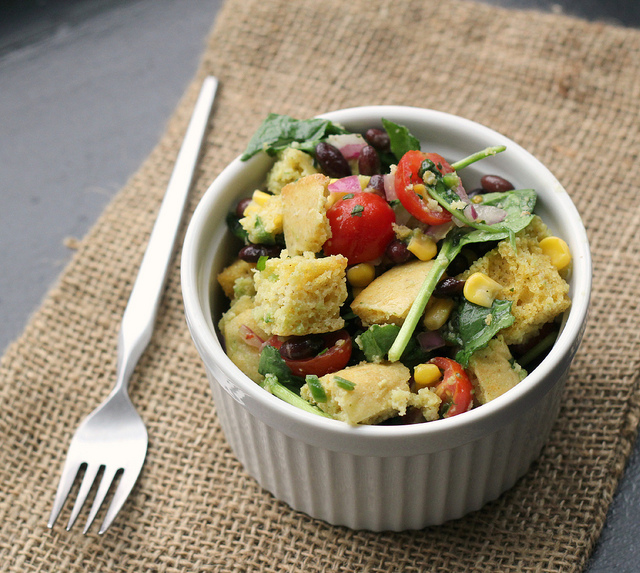 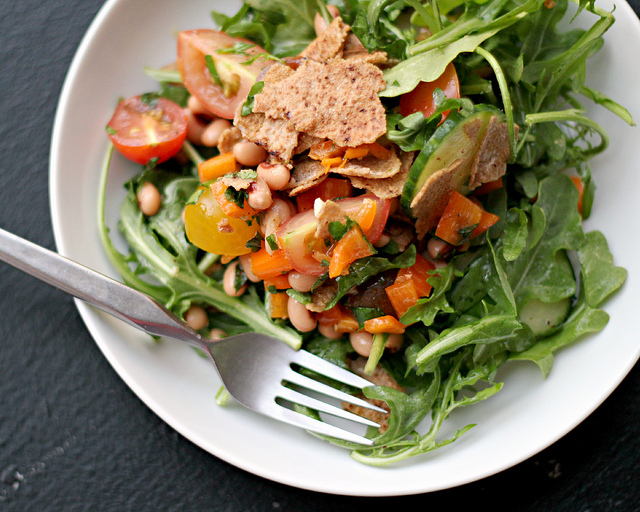 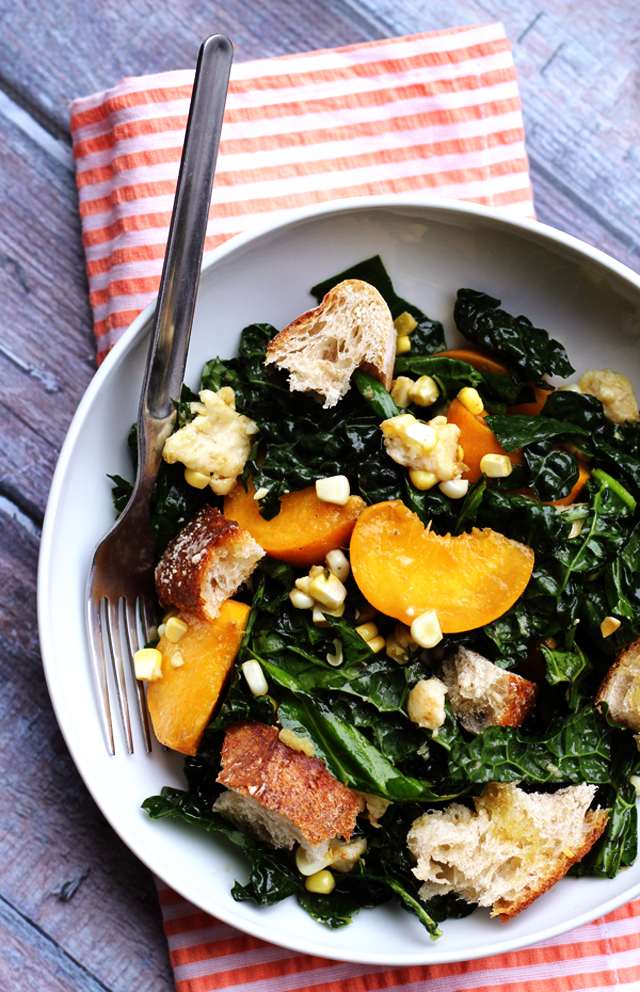 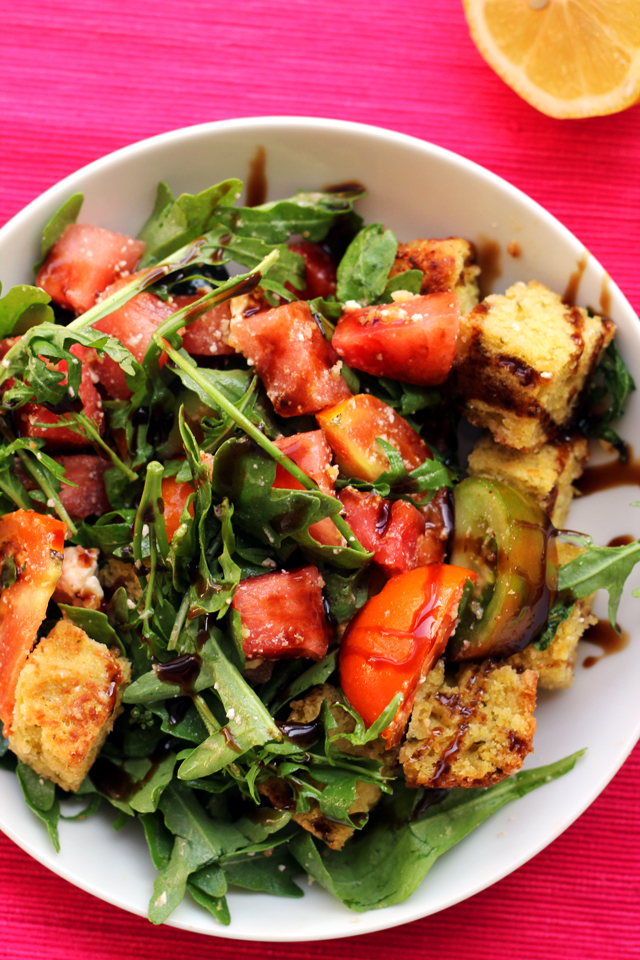 49 Responses to Summer Panzanella with Watermelon, Pesto Cornbread, and Feta